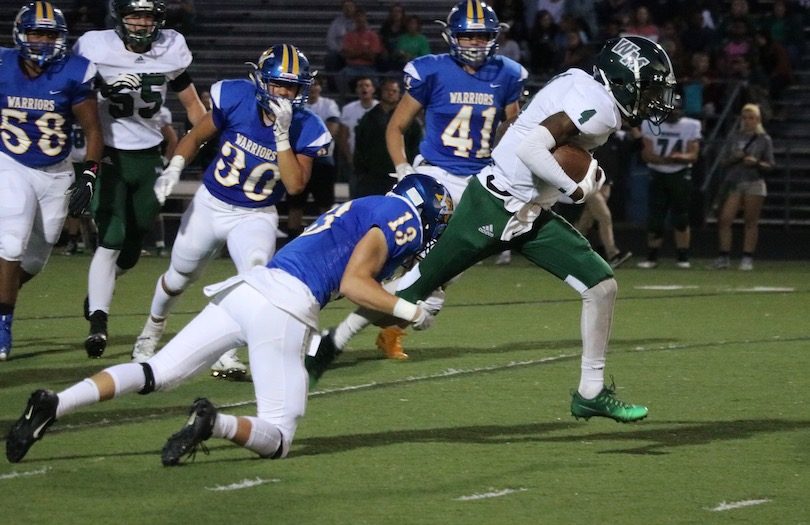 William Monroe running back Dupree Rucker was fired up in the Dragons’ postgame huddle.

The Monroe Rucker knows beat Western Albemarle 22-15 Friday night for the Dragons, William Monroe’s second win in a row after beating Madison before a bye week. Now William Monroe has some serious momentum heading into Northwestern District play. It appeared to be an eye opening performance for the Dragons who are now 2-3 after an 0-3 skid to start the year.

“This was a big game for us, this is just amazing that we can come out here and compete with Western,” Rucker said.

The Dragons pulled it off by imposing their will, playing exactly the way the Dragons set out to play this summer. They got 192 yards on 32 carries from Rucker who relentlessly pounded away at a Western defense that struggled to get off the field. That allowed them to control the clock with a nearly 2:1 advantage on time of possession over the Warriors. The Monroe defense, in turn, stayed fresh and held the Warriors in check most of the game, giving up an early touchdown and another when the game’s result was decided. That was in large part due to the work of the Dragons’ defensive ends, David Mack and Isaiah Taylor.

Taylor is just a sophomore and he stacked up a pair of crucial sacks for the Dragons.

“It starts in practice and nobody treats me like a tenth grader, (the upper classmen) treat me like one of their own so even when I do mess up they just tell me I’ve got to do better,” Taylor said. “They help me.”

The offense was moving the ball from the opening kick, though Western’s defense forced a goal line turnover on downs that opened the door for a long Austin Shifflett run and a touchdown on a screen shortly thereafter.

Monroe didn’t waver from the plan though and answered after a partial punt block that Brandon McDonald scooped up and put the Dragons in the red zone. Another quick dose of Rucker followed to pull to within a point at 7-6 when he scored from 18 yards out with 7:39 left in the first half.

“It starts up front with the big boys, they came out and did their job,” Rucker said. “And I’m following behind a big fullback in Phillip Shifflett and when he puts somebody on their butt, it opens up a hole for me and I can do my thing.”

The Dragons added to the lead in the closing seconds of the first half when quarterback Jared Knights snuck in from a yard out, putting the Dragons up 13-7 heading into halftime. Monroe then went to work on the clock in the second half. Grinding out a couple of long drives including one that took more than six minutes off the clock in the fourth quarter. That required one wild fourth down conversion that required the Dragons to go against type and throw the ball, one of only seven pass attempts in the game.

“Coach was like, Jared, you’re going to throw it to the field side, make sure you get some air under it,” Knights said. “I have a ton of confidence in Logan (Barbour), I knew he’d get up and get it.”

Barbour plucked the jump ball out of the air for a first down, allowing Monroe to continue to melt the clock until Phillip Shifflett plunged in with 1:50 to play to extend the lead to 22-7. It was a big moment for Knights who has taken a step forward in the last two wins.

Western got 82 yards on the ground from Austin Shifflett, picking up the bulk of those on a long run in the first half. Carter Shifflett also threw for 85 yards and rushed for 58, but the Warriors’ offense just struggled to move the ball outside of the opening touchdown drive and a late score as time wound down.

It didn’t help the Warriors that Monroe held on to the ball for incredibly long stretches, giving Western few opportunities to work out the kinks.

The Dragons will jump into Northwestern District play against Brentsville next week at home while the Warriors will try and get back on track on the road against Fluvanna County.