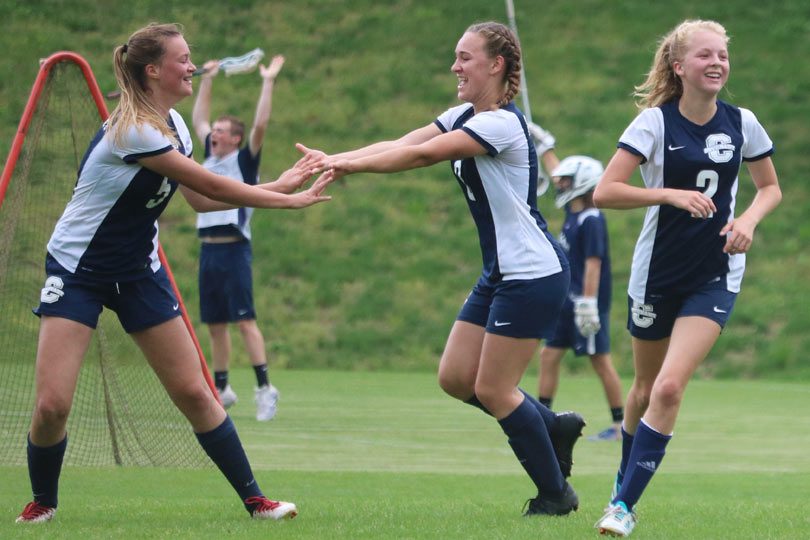 It wasn’t the same call, but it played out in a pretty similar way for Covenant girls soccer’s Bella Harris.

When the Eagles got a late first half corner kick, Harris, a defender, stepped up into her usual spot for the set Covenant had called. It didn’t go to plan.

“It just deflected somewhere in the middle and it just kind of bounced right out to me,” Harris said. “We have a corner kick play where I’m supposed to shoot from there so in the craziness it kind of set me up perfectly for what I’ve been trained to do.”

Harris uncorked a high, arcing shot and from way outside, it found the back of the net, gliding over the outstretched arms of Eastern Mennonite’s goalie for the sophomore’s first goal of the season. It was that kind of Saturday morning for the Eagles, who rolled 6-0 past the Flames to clinch the Blue Ridge Conference tournament title.

“That was awesome, she’s such a strong player and has such an incredible kick,” said Covenant keeper Teegan Murrie. “It is so fun to see her attack this game.”

With the win the Eagles have secured the No. 2 seed in the VISAA D2 tournament set to begin Tuesday with first round games. Covenant has a bye t the quarterfinals which are set t kickoff Wednesday.

The Eagles jumped out to a 5-0 lead by halftime with Harris’ blast the final of that series of five goals with Stella Maton, Claire McCartney and A.J. Hudock contributing as Hudock scored twice before the break. Maton tacked on her second goal in the second half and with a first half assist clearly had a big day.

Murrie helped Covenant secure things on the back end with eight saves on the day. Murrie isn’t always challenged but when she is she’s been up to the task. She’s surrendered just five goals on the year and run up 5.6 saves per game in 14 starts.

“We really wanted this game and when my teammates are out working to score I’m doing my best to keep it clean on the other end,” Murrie said.

She did just that, maintaining a shutout despite some excellent chances for the Flames. Playing that kind of sound soccer on both ends of the field should bode well for the Eagles, who were seeded No. 2 in the state’s VISAA Division 2 and will take on the winner of Tuesday’s Steward/Portsmouth Christian matchup.

“This is huge for us, it sets us up really well for states,” Harris said. “We have the momentum, we’re peaking at the right point. This win is everything.”