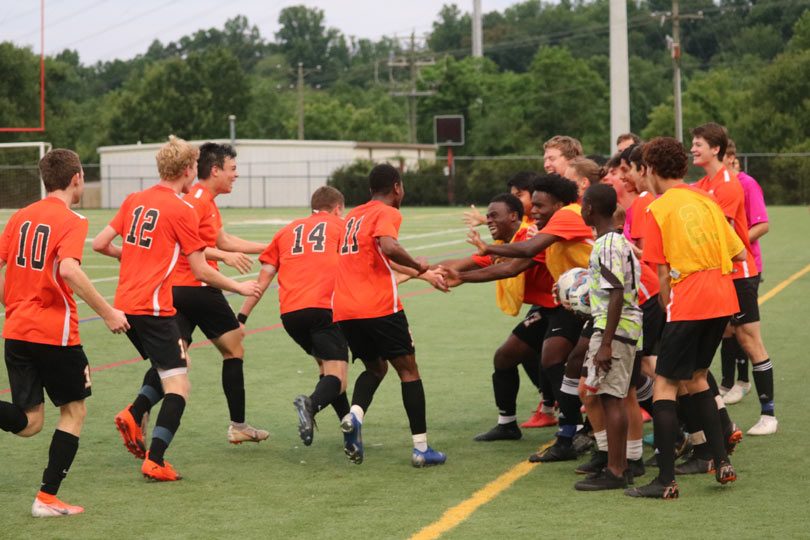 Charlottesville got three second-half goals and avenged last season’s road loss to Blacksburg with a 3-1 win in the Region 4D final.

A year ago, the Bruins had denied CHS home field in the state tournament with a 1-0 win. This year, the Black Knights were ready.

Kyle Lehnert had two goals and Joe Von Storch had another, with Benhui Ryang recording two assists. With the win, Charlottesville clinched a home game in the first round of the state tournament–another rematch, this one against Loudoun Valley on Tuesday.

“It’s awesome to get redemption and bring the trophy back home,” Lehnert said. “Last year we went to the regional final and lost 1-0, the year before that we lost in overtime. It feels great.”

Charlottesville had to do something unfamiliar most of the first half — play from behind.

The Black Knights, who had outscored their first two regional opponents 13-0, conceded one early when Blacksburg’s Kade Wheeler caught just enough of a long feed to trickle it past keeper Nate Fisher for a 1-0 lead in the fifth minute.

The goal occurred against the run of play — most of the action occurred in the Charlottesville offensive half of the field, yet the Black Knights couldn’t break through and went into the half trailing.

They kept up the intensity after the intermission, and it paid off quickly. In the 45th minute, Ryang fed Lehnert on a cross for the equalizer. A minute later on a free kick from the opposite side, Ryang found Von Storch for a header to give Charlottesville the lead.

“Coach told us in the locker room that we were going to get one on a set piece,” Ryang said. “I just put one into the middle. I knew our players could elevate.”

They stretched it further in the 56th minute when after Bruins keeper Micah Bonds punched out an initial Black Knight try, Lehnert was there for the rebound.

“I knew that the keeper was going to get a hand on it, so I just let it hit my chest, let it bounce and put it in,” Lehnert said.

Charlottesville outshot Blacksburg 11-9 for the game and had a 4-0 edge in corner kicks.