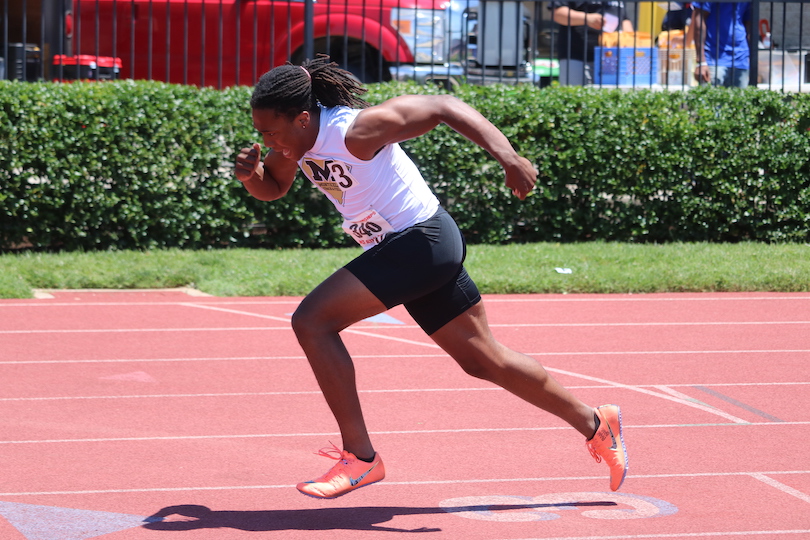 Monticello’s Will Trent was on a mission. The UVa-bound senior was intent on making his mark in his final Class 3 state championship opportunity.

“This is redemption — I had an awful indoor state meet, it just wasn’t my day,” Trent said. “To be able to come back and pick up where I left off last outdoor season (as a sophomore) was an amazing feeling.”

He wasn’t alone either.

Seemingly everywhere you turned Friday, Central Virginia athletes were competing at a high level at Liberty University in the VHSL Class 3 Outdoor Track and Field Championships.

If there had been a podium — there wasn’t due to COVID-19 mitigation conditions — Central Virginia area male athletes would’ve been on top of it in six of the 17 events, more than a third of the time.

Two of those top finishes came from Goochland’s Chris White who won two races late in the day, first getting it done in the 300-meter hurdles and then again in the 200 meter dash, running from way in the outside lanes in both events. White went 22.0 flat in the 200, just six-tenths off the state record time set by current Virginia Tech track standout Cole Beck.

“I tried to start off pretty quickly but I saw they were picking up speed pretty quickly so I just tried to match the speed of the people around me,” White said. “My coaches always yell at me for not running as hard as I can — (Today) I just put it all out on the track.”

Goochland also took sixth in the 4×100 while Trevor Black finished second in the state in pole vault.

Trent’s own desire for redemption stemmed from a frustrating indoor state championships performance where the Mustangs won the team title, but Trent didn’t meet his own standards. Friday he was much closer to peak form and obliterated the 400 field.

“Being in the third seed honestly helped me a lot because I was able to see my top two competitors in the heat so I just sat on their hip the entire race and just took off,” Trent said.

Trent won the 400 with a time of 50.53, easily rolling to the win despite being more than a second off his state record time set back in 2019 of 49.35 as a sophomore. That was likely in part because there wasn’t anyone pushing him down the final stretch — Trent had done the work early in the race.

“My goal at the start of the race was to catch the dude in lane four and sit on him as long as I can, then move up to the guy in lane five because they were the top two in the heat,” Trent said. “Once I caught up with them I knew it was over because they were behind me by multiple meters. On the backside curve I just took off and used what I had and just balled out.”

He was far from the lone factor in Monticello’s fourth place finish. Malachi Fields put together his own personal heptathlon and took third in the shotput and high jump, fifth in the long jump, sixth in the discus, seventh in the triple jump and 10th in the 200 and fourth in the 4×400 along with Trent, Hunter Ray and Phillip Estes. It was a sterling performance for the UVa football recruit in likely his final outing on the track. Monticello’s Esteban Vizcaino also chipped in to the team score with a seventh-place finish in the 3200.

Fluvanna’s seventh place finish as a team was fueled almost entirely by Jaden Ferguson. Ferguson wasn’t far behind Fields as far as sheer event volume goes as the sophomore won the state high jump with a clearance of 6-foot-4, took third in both the long and triple jumps and grabbed eighth in the 200 after running the anchor leg of Fluvanna’s third-place 4×100 squad along with freshman Kenyon Smith, junior Tre Smith and fellow sophomore Addison Patchett.

William Monroe’s Alex Hoffman won the state shotput championship with a throw of 53-04 and took second in the discus with a runner-up finish of 153-05.

“I didn’t start off very hot (in the shotput) but I ended up getting one out to 53 which was pretty good,” Hoffman said.

That’s an incredible performance in its own right, but it’s particularly impressive considering that just a few months ago, he broke his leg during a Monroe football game in early March and has had to readjust and re-tool his approach in order to get throws off while still continuing to let that broken leg heal.

“It’s just a blessing that I’m able to throw,” Hoffman said. “It could’ve been really bad, I could’ve not been able to throw but thankfully I was able to do it. I had to change up my technique a little bit.”

Charlottesville’s 12th place performance as a team was mostly fueled by Nick Pedersen taking second in the 110 hurdles and fourth in the 300 hurdles. Pedersen wrapped up his career with a PR in the 110 that was fueled by some significant local competition in Western Albemarle’s champion in that event, Henry Sullivan.

Pedersen was clearly thrilled to wrap up his high school track career with a strong performance at states.

“Track all around is just a great sport, I’m so happy I spent four years doing it,” Pedersen said.