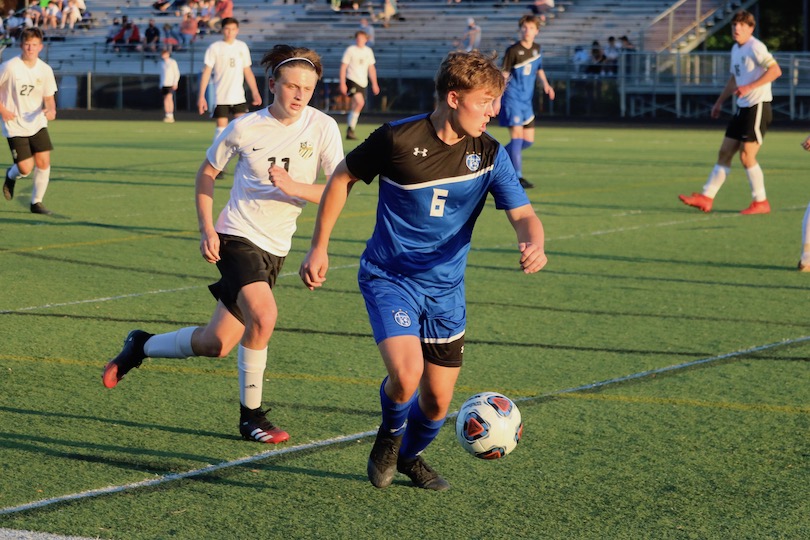 Western Albemarle boys soccer waited so long to set foot on the soccer field again after winning the 2019 state championship that even practice hasn’t seemed like much of a chore.

“The past two weeks, practicing with the guys has been such an experience — haven’t had it in two years,” said Western senior Lachlan Murphy. “It’s been really good to be back.”

Both the Warriors and Monticello brought an intensity that matched the moment of playing for the first time in nearly 700 days on Monday night, with Western Albemarle prevailing in a physical, hard-fought matchup 3-1.

The Warriors struck first when sophomore Grayson Bergert broke through off an Aidan Sherlock feed on a quick run down the middle. With a pack of experienced seniors and just two weeks of training in advance of the season opener, the defending Class 3 state champions weren’t totally sure what to expect from the roster’s younger players, but they delivered quickly.

“It speaks to the talent that we have coming into the program, seeing him in his first half ever at the varsity level, it’s definitely a good sign,” Murphy said. “Especially because we know the other young guys can play just as well, it’s definitely a big moment for us.”

Monticello refused to back down after Bergert’s strike and answered almost immediately when senior Drew Hall found the equalizer with 12 minutes left in the first half. The Mustangs, who boast 12 seniors of their own, were sharp and aggressive throughout the match.

“That was fantastic because usually we tend to drop back and drop our heads but that wasn’t the case,” said Monticello coach David Rivera. “We had a fight in us.”

The Mustangs’ approach definitely gave Western some issues, particularly in the second half.

“I thought they played a great game, they made nice halftime adjustments that contributed to our inability to possess and move the ball in the second half the way we were in the first,” said Western coach Milo Oakland.

The difference was that the Warriors drew a pair of penalty kicks on critical fouls in the box, with the first one coming late in the first half when Aidan Sherlock created a turnover and Western went on the attack and drew a foul in the box. Murphy cashed in on the PK and the Warriors held a 2-1 lead at the break.

The second came with 27 minutes to play when freshman Rafa Ibanez drew a foul and Casey Williamson took the PK to give Western some breathing room.

“They were playing really physical and we matched it,” Murphy said. “We also included our technicality which allowed us to draw those fouls and put them away.”

The Warriors needed those two PKs because Monticello continued to attack throughout the night, getting unlucky with a pair of shots banging off the post.

“They were nervous and anxious but they used it to their advantage,” Rivera said. “I’m just glad we’re out here playing some soccer. We had to stay physically and mentally prepared for that.”

With a little more than five minutes left, Western keeper Ryan Marks made a critical save on a flurry in front of the goal that prevented the final few minutes from getting particularly scary for the Warriors.

“The word of the day was chaos, because with two weeks of training you just never know what you’re going to get,” Oakland said. “But you know the other team is in the same boat, so you just go out and play as hard as you can.”

Western will next take the field Monday at home against Fluvanna County while the Mustangs have their home opener Thursday against Albemarle as part of a challenging week.