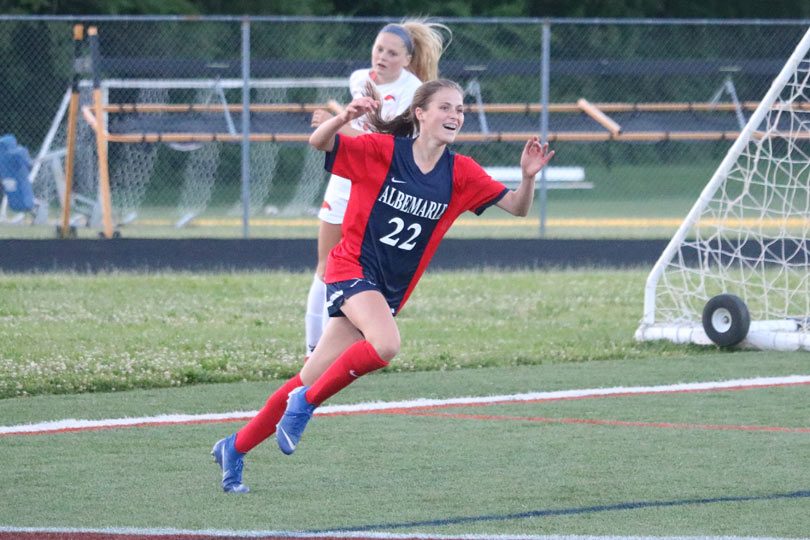 Even when they were trailing by a goal at the half in the Class 5 state quarterfinals, Albemarle girls soccer didn’t panic.

“One thing we say a lot is go green, which is just pushing yourself to that next level and not just for yourself but looking at your teammates and wanting to work for them,” said Albemarle’s Savannah Alexander. “Looking at all 10 other people and even our bench hyping us up the whole time, I think that pushed us to get past that hump we were on.”

The Patriots went green in the second half, scoring two critical goals, both in part a product of incredible play in the middle by Alexander and speed on the wing from Madeline St. Amand. The second goal, a penalty kick from Megan Schantz with 21:44 to play held up as the gamewinner in a 3-2 victory over Briar Woods to vault the Patriots into the state semifinals for the fourth straight season. They’ll face the Hickory/Douglas Freeman winner Friday at 10 a.m. at Glen Allen High.

Schantz, who has been a set piece master much of the season for the Patriots, got a chance at the penalty kick after Madeline St. Amand pressured the Falcons on a run and forced a handball in the box. Alexander drew the keeper out to defend her but then laid it off for St. Amand. St. Amand blasted it with her left but a Briar Woods defender knocked it down with her hand. A few seconds later, Schantz calmly stepped up and went to her right as the Briar Woods keeper stepped the wrong way and couldn’t recover.

“I knew we had to get back, we had to just keep creating opportunities,” St. Amand said.

The penalty-inducing play was one of a rash of runs by St. Amand, triggered by Alexander’s decisive play moving the ball forward against Briar Woods as that combination paid off regularly in chances for the Patriots. The most spectacular was the equalizer, a brilliant run down the left flank that tied things up with 31 minutes left in the match.

“Savannah is pretty explosive and dynamic for us so any time she has the ball we’re going to have the opportunity to score, especially because of who’s on the receiving end,” said Albemarle coach Amy Sherrill.

Alexander regularly helped trigger an up, back and through combination that ended with St. Amand or Kora Jillions making a run. She executed almost flawlessly all night.

“I had people on the bench, people in the game hyping me up and telling me they have my back,” Alexander said. “Whenever I hear ‘I’ve got your back’ that always helps me.”

The Albemarle defense also managed to mitigate the damage of trying to contain Sophie Maltese, Briar Woods’ electric sophomore. She gave the Patriots fits much of the night, but Albemarle managed to hold Briar Woods scoreless after the break.

“(Maltese) was electric for them so those counters were super important on defense,” Sherrill said. “They played amazing keeping her at bay.”

Maggie McMullan had the Patriots’ first goal in the early going, with some help from Jillions in the wake of a corner kick. The Falcons’ keeper punched out the initial corner and McMullan redirected it while Jillions fought for it near the goal line as the ball found its way into the net. Briar Woods equalized on a Sophie Phillips goal and then surged ahead when Allie Harvich finished with under 10 minutes to play in the first half.

The Patriots celebrated after the game with a large group of alumni on the sideline like UNCG’s Aiyanah Tyler-Cooper and Mary Washington’s Gracie Williams, past heroes who have factored into the four-straight state final four berths the program has attained. Their presence was a stark reminder of what this year’s edition of the Patriots had to live up to, the standard they are held to despite a lot of new faces stepping in throughout the lineup.

The newest group rose to the occasion and wrote their own thrilling chapter with the come-from-behind win over Briar Woods a year after the Falcons ended Albemarle’s season in the state final four.

Now they’ll get a chance to write, perhaps, two more chapters in Richmond.

Video: Megan Schantz’ PK to put Albemarle girls soccer up 3-2 midway through the second half of the state quarterfinals against Briar Woods. Instant Video brought to you by Blue Ridge School: Built for Boys.

Albemarle girls soccer keeper Jaya Daniel talks about the Patriots’ 3-2 win over Briar Woods in the state quarterfinals in First Off the Field presented by @PT_acac pic.twitter.com/mhxdbz3Sgw