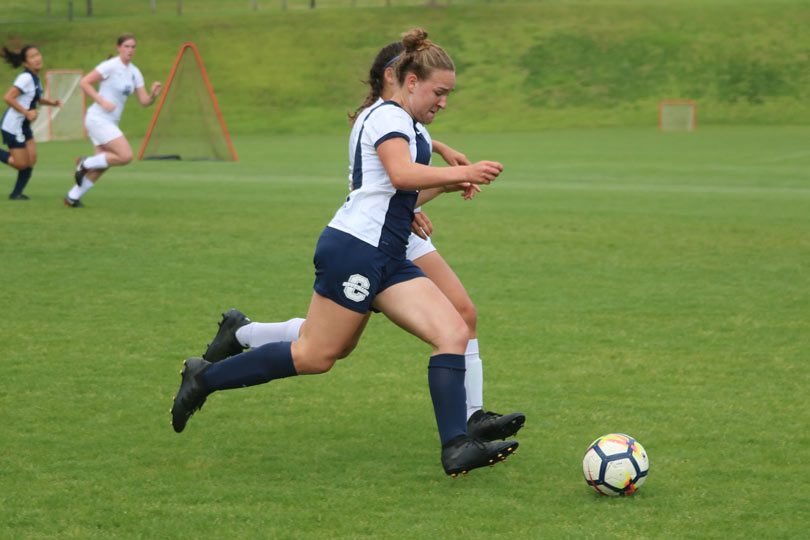 After surrendering two goals in the final nine minutes of regulation, the Eagles were forced into overtime in the VISAA D2 state quarterfinals, with all the momentum in Steward’s favor after its furious finish to regulation.

The Eagles reset and shifted the momentum back, creating some chances in overtime. Finally, they cashed in, with A.J. Hudock drawing a foul and Anna Jane Johnson slotting in the penalty kick for what became the game-winner in a 5-3 overtime win over Steward that vaults the Eagles into the state final four for the second straight season.

“We were playing really frantically but we just had to regroup and tell everyone to play calm and not be frantic,” Hudock said. “(In overtime) that’s what we came out and did.”

Covenant will take on Nansemond Suffolk Academy in the state semifinals at 6 p.m. in Glen Allen Friday at 6 p.m.

With around 10 minutes to play, it appeared the Eagles would cruise into that matchup with NSA with a 3-1 lead, courtesy of two goals from Hudock and another score from Maton. The first came with under three minutes in the first half, an equalizer that locked Covenant into a 1-1 halftime. It was a huge lift for a Covenant team that was briefly deflated by the Steward first half goal and appeared to be a little scrambled.

“We were really stressed out and I think getting that goal kind of lifted our spirits and showed us we could win,” Hudock said.

Maton then made it 2-1 off a Madi Alley assist with 26 minutes left in the second half before Hudock scored her second to give the Eagles some assurance. Steward refused to roll over though, and scored two goals, the first with under nine minutes to play and the second with under two minutes where their entire team seemed to crash the net on Covenant keeper Teegan Murrie who’d played really well and was solid in extra time. That led to some brief confusion from the side judge and after conferring with the center referee, the goal stood, tying the game at 3-3.

“A good team will punish you for your mistakes and we made some pretty bad mistakes,” said Covenant coach Bryan Verbrugge. “Coming into overtime, I had confidence in our ability and our gameplan.”

That set the stage for Hudock’s effort. She’d had some success driving down the left flank during regulation and she went to that approach again. She battled past the Steward defender and got to the end line, and she tried to turn, the defender dragged her to the ground. Covenant called on Johnson to take the penalty kick. She’d taken one against Steward during the regular season matchup and the Eagles had been putting in practice time on penalty kicks in the lead-up to the tournament.

“We’ve been doing penalty kicks at the end of practice this week,” Johnson said. “I was confident, I wanted to take it and I wanted to move the momentum up for my team.”

Without golden goal in private school overtime, the Eagles kept the pressure up and connected with Maton’s second goal of the game appearing to put the match away with 3:44 to play. Chloe Mitchell had an assist for the Eagles and along with Johnson and Bella Harris helped lead a defense that held Steward scoreless in overtime after the rough finish to regulation.

After surviving that battle, the Eagles can now turn their attention to the state semifinals.

“We’re really excited to be moving on, we definitely want to get all the way to the final,” Johnson said. “We still have games to play and we just want to take it one-by-one.”