Landon Swingler and his senior teammates were honored before Regents’ VACA state quarterfinal matchup against Ridgeview on Tuesday night. Swingler carried the Senior Day celebration into the game with an outstanding performance, dropping 28 points and leading the Lions to a dominant 69-31 victory to vault Regents into the state final four.

Ridgeview got on the scoreboard first with a free throw in the game’s first minute, but Regents responded with a 9-0 run and the Lions dominated the rest of the first quarter, outscoring Ridgeview 18-4 in the opening frame.

Swingler spent a lot of time roaming the perimeter on the defensive end, looking to snatch steals and get out on fast breaks.

“It’s been an honor to have been his coach,” Regents head coach Travis Johnson said of Swingler. “I hope I get to coach him for two more games. He’s the engine of the team. There’s no question about that.”

Swingler scored nine points in the first quarter, after which Regents led 18-4.

After not seeing the floor in the first half, Regents junior Quinton Renigar made an immediate impact in the third quarter and formed a lethal duo with Swingler. After Ridgeview cut it to a 37-26 game, Renigar and Swingler combined to go on a 13-2 run, including a lob from Swingler to Renigar for a dunk and a Renigar three-pointer to beat the buzzer at the end of the third quarter to give Regents a 50-28 lead.

“They’ve been playing together now for three years,” Johnson said of Renigar and Swingler. “They have great chemistry together. They’re a great 1-2 punch. When both of them get hot, it’s fun to sit back and watch.”

With the game in hand, Regents continued to play tight defense, holding Ridgeview to just three points in the fourth quarter and rolling to a 69-31 victory.

With the win, Regents advances to the semifinals of the VACA State Tournament on Friday night against Westover Christian Academy, looking to return to the state championship game to defend their title. 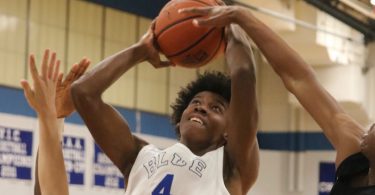 After easily dispatching Peninsula Catholic on Tuesday in the quarterfinals, Blue Ridge faced a... 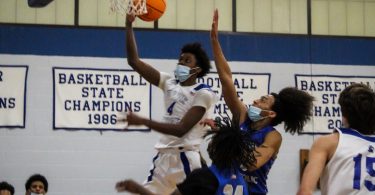 Blue Ridge scored the game’s first 23 points and never looked back Tuesday night, rolling to a...