Charlottesville boys soccer faced one of their toughest test of the season when they took on Christiansburg in state quarterfinals on Monday night and managed to come through with a huge win 2-1 to advance to the state final four.

Charlottesville had been previously rolling through opponents, winning 12 of their last 13 games, and were looking to do the same against a formidable opponent in Christiansburg. However, Charlottesville didn’t get off to the start they were quite looking for. Immediately after the kickoff, the Blue Demons stole the ball and nearly scored in the game’s opening seconds.

A couple of possessions later for Christiansburg, they were successful in their scoring attempt, and Charlottesville found themselves in an unusual and uncomfortable 1-0 hole early. Christiansburg never dominated time of possession; in fact, Charlottesville held the ball for most of the first half, but the Blue Demons still found ways to use a counter attacking style to put immense pressure on the Black Knights’ defense.

“(Christiansburg) came out very aggressive,” said Charlottesville coach Martin Braun. “They put pressure on our defense. On their goal, they made a nice run, and we shied away from putting in a good tackle. But other than that, I thought we played pretty good in the first half.”

Charlottesville seemed sped up by their opposition at times and were thrown off a tad by the pace of play. Nevertheless, Charlottesville took several solid shots on goal, but none got past Christiansburg’s goalkeeper and went into the break down a goal.

Out of halftime, the already aggressive looking Black Knights somehow became more aggressive and attacked Christiansburg’s defense repeatedly. Their first shot at goal after halftime was successful, when senior Christian Torres-Guzman struck six minutes into the half. Not four minutes later, the Black Knights scored again; this time by Rocco Fleming. After the second goal, Charlottesville had figured out Christiansburg’s defense. Braun pointed to some changes they made at halftime.

“In the second half, we changed things up a bit, ramped up the intensity, and got the two goals we deserved. We switched the formation a bit, so we added more width to our attack, but really it was just getting the guys playing their normal soccer, not letting the moment get too big. I think they did that in the second half, and we had success.”

Charlottesville played relatively conservative down the stretch, and consequently, Christiansburg had some good looks at goal. Due to great saves by junior goalkeeper Jacob Engel, the Black Knights successfully put the Blue Demons away and earned a spot in the state semifinals.

The Black Knights will face Tabb in the semifinals, a squad that rolled 4-0 past Maggie Walker in the quarterfinals. 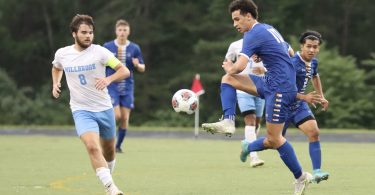 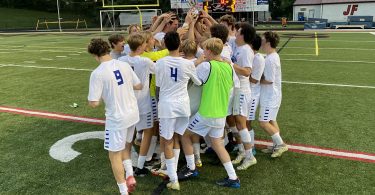 Make no mistake, this region title didn’t come easily.    Specifically, this one win did not...