Behind 18 strikeouts and just two hits allowed by Gillespie, the Lions prevailed 2-0 over the Mustangs, but Louisa had to overcome 22 strikeouts by O’Connor, who allowed just two hits in the 10-inning marathon.

The game was deadlocked at 0-0 after an extra eighth and ninth inning, and then Maddie Pleasants singled for Louisa to lead off the top of the tenth. After an error, Pleasants advanced to third, then scored on a passed ball. O’Connor settled back in and came up with another strikeout, then struck out the next batter as well. Another passed ball at the plate though allowed Emma McGehee, who’d reached on the error that advanced Pleasants to third.

That gave Louisa and Gillespie a 2-0 lead heading into the bottom of the 10th and Gillespie struck out the side to secure the win for the Lions.

Pleasants went 2-for-4 on the night for Louisa and Dara Sharpe went 1-for-4. Kaitlyn Willis had both hits for Monticello on a 2-for-4 night.

Louisa returns to action Tuesday against Orange County while Monticello heads to spring break and will return to action April 12 on the road at Fluvanna. 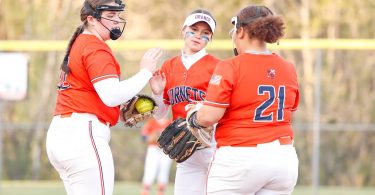