To punch a ticket to the state tournament, Albemarle girls lacrosse knew they were going to have to overcome some challenges.

A few of them? Only one team advances out of the region. An injury to a starting goalie. The Patriots would have to win on the road twice.

No matter. Step one complete. Albemarle won an absolute shootout on the road Tuesday night 24-17 over Mountain View, with Ella Dofflemyer and Leigh Young each exploding with five goals while Sophia Bombaderi and Jordyn Solak notching hat tricks.

The Patriots’ will likely need to keep outsourcing opponents as they sort out that keeper situation that tripped them up just before the regular season finale — Albemarle registered four saves Tuesday. But with Kaley Maynard and Lauren Grady each dishing out three assists in the semifinal win, it’s clear the Patriots are moving the ball well.

The Patriots will face Patrick Henry at 3:30 p.m. 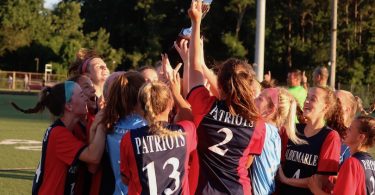