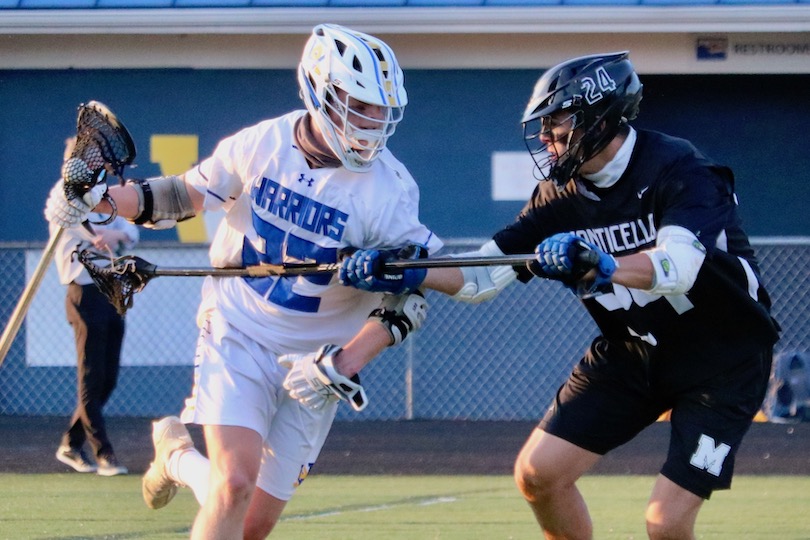 Mario Washington had to wait more than a year to get his first victory as a head coach thanks to the pandemic, but Tuesday night he wasted little time getting in the win column with Western Albemarle boys lacrosse beating Monticello 18-5.

“This is a program I’ve been a part of and helped to build up and last year was really tough for us to lose that season,” Washington said. “These kids are hungry and we’re just happy to see them back on the field.”

The game got started with a well-played first quarter by both sides, with Austin Payne scoring two of his six goals on the night for Western. Payne finished with five first half goals.

“We’ve got a little bit of everything and it’s really coming together, we’ve got some good offensive pieces,” Washington said. “We’ve got a good team this year.”

Monticello countered with a pair of goals to hold a 2-2 tie at the end of the first quarter. But that evenly-matched tug-of-war came unraveled when a late hit on Monticello keeper Nick Garrett knocked the senior goalie out of the game with a shoulder injury. Chaos ensued with Monticello star longstick midfielder Cooper Hauser quickly switching into keeper only to be replaced in a short order by Cory Dudley playing in his first lacrosse game, allowing a critical piece like Hauser back on the board where he’d been playing defense and offense with a long pole.

“(Hauser) has grown into a grown man, he and Nick Garrett are captains on this team and they took this over after a long shutdown and I couldn’t ask for better kids to have out here on the field,” said Monticello coach Tucker Tapscott. “I think Cooper led my team in scoring, ground balls, saves, assists, you name it. He’s a coach’s dream. Cory just came out and said he wanted to try lacrosse, he wanted something new. Had no idea he’d be in the cage against Western in our season opener, he’s got some moxie to him.”

Both Hauser and Dudley played admirably but Western controlled possession and created a lot of offensive opportunities that allowed them to hit the gas and pull away quickly over the next couple of quarters in the wake of Garrett’s injury. In the process, Quinn Reilly got going with four goals for the Warriors, Will Ferguson also notched a hat trick to go with his two assists and Gray Kallen and Stuart Widener each notched two goals. Tyler Spano tacked on a goal and two assists.

Jack Zayas finished with four saves for the Warriors in the cage.

The Mustangs will have to regroup quickly with a Friday night clash with Albemarle on the dockett while Western will host Fluvanna County Tuesday.