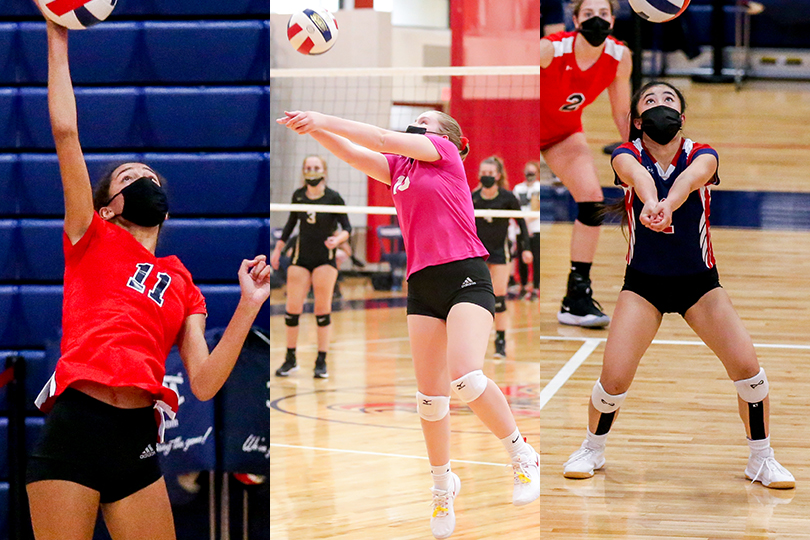 The Basics: In a season that felt like a whirlwind for everyone, it was particularly wild for Albemarle’s volleyball team as an already condensed season got condensed more by a COVID-related pause to start the season. The Patriots have been perfect since returning from that COVID pause, rolling unbeaten through the Jefferson District slate before winning the Region 5D title in a pair of wins over North Stafford and Mountain View to earn this state final four berth against Freedom. The Patriots have stuck to the script for the most part, feeding junior hitter Maya Winterhoff at the net to the tune of a 38-kill performance good for a tie for sixth-all time in VHSL history in the Region 5D title match. With Keira Roach, the model of consistency at setter and a team-effort on digs led by libero Franceszca Penaredondo, the Patriots have been consistent and capable of imposing their will on each match. That becomes tougher when you reach the state semifinal level and teams have the ability to knock you off schedule or have their own crazy strengths you’re trying to contend with. Albemarle may have to adapt and adjust to find another way to win and that’s easier said than done on the fly, especially when facing a deep squad like Freedom’s that has three players who were All-Region back in 2019 in hitter Haley Adams, setter MiLinh Nguyen and the versatile Halie Murphy. That’s how it should be really. If you’re going to earn a state championship game berth, you should definitely have to go through someone tough to get there. At the end of this one, whoever is triumphant will definitely be able to say that. Interestingly, coach Lance Rogers has seen Freedom in the playoffs before, in his final match as Western Albemarle’s head coach with Freedom winning 3-2 in a wild 2010 Region II quarterfinal. Can this edition of a Rogers-led squad beat the Eagles?

Key Matchup: Freedom’s front line contends with Albemarle’s Winterhoff. Winterhoff is a unique weapon, a 6-foot-1 hitter who unleashes a howitzer of a ball at the net while also putting in big-time work defensively by piling up digs. It’s just hard to know how to handle her, as putting up a block has so far been fruitless for opponents, but by the time the ball gets to someone on the backline its been absolutely hammered and is really difficult to contend with (see here for an example). Freedom’s libero Susanna Kim will surely have her hands full, but the Eagles’ block is likely going to have to find a way to get involved, or at least force Sophia Dawson or someone else to carry some of the load for Albemarle. Of course, Dawson has been no slouch this season either, so perhaps Freedom will have to be careful what they wish for.

Who to Watch: Albemarle’s Keira Roach. Roach is such a fixture at setter that she stands out even in a program that has had a ton of awfully good ones. The Susquehanah-bound senior will definitely be missed next year, but beyond her prowess with setting the table for the offense or getting a well-timed quick kill over the net, it’ll be her passion for the program and her ability to steady the ship at key times that’ll likely be missed the most. Roach and the rest of the Albemarle seniors have made the most of getting one more shot at it when they weren’t sure they would. Now they get a week to leave an indelible mark on the history of the area’s most productive and consistent volleyball program.

The Line: Albemarle in five. Usually in a state volleyball semifinal you’ve got to earn it, and this one looks like a tossup.