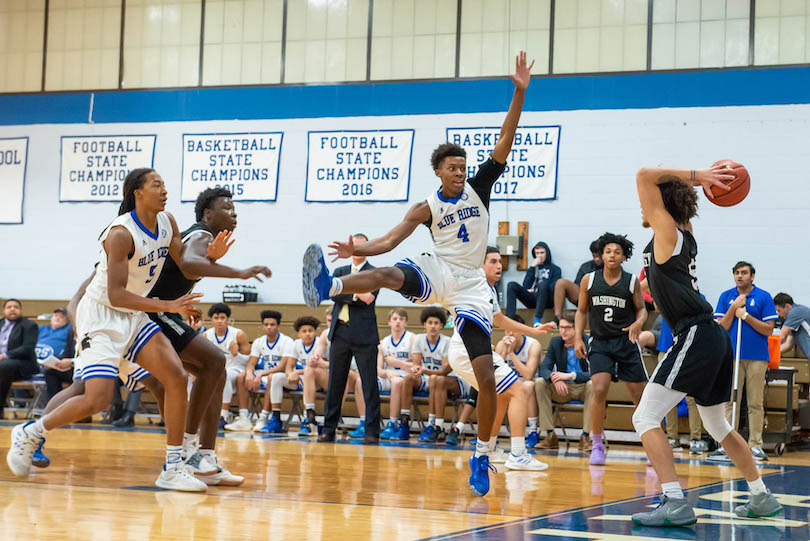 For our 10 years of existence, we’ve always done Weekly Briefing for football season, breaking down every matchup each week. But recently we decided to take Weekly Briefing and expand it to basketball. There are too many games to break down every single one, but we’ve got a format in mind that we think will give you an inside look at what’s happening across the local basketball map each week.

If you look at the Jefferson District girls race — scroll down for standings — it’s pretty obvious that the entire league is a toss up right now. While Charlottesville is on top at 5-1, Albemarle has at times looked like the potential champion and just a week ago, Western Albemarle looked capable of asserting itself and rising above the pack. Then you can throw in Fluvanna, who beat Western last week and Louisa who beat Fluvanna the same week. Albemarle won a close battle against Western last week and put itself in much stronger position, but the Patriots also lost to Monticello. .

What we’re saying is that on any given, night any of at least five of the district’s seven teams could look like a potential champion. Having to survive those kind of games every single night could end up being a major positive for the district squads. Sure, they beat up on each other and their records will show it, but that could make each squad more ready for the playoffs when those roll around. If you’ve been in a battle for survival for months, maybe the playoffs won’t seem like such a ratcheting up of tensions.

The Black Knights kind of control their own destiny at this point, but there are plenty of pitfalls that lie ahead.

Who will find themselves on top when the district season wraps up in February?

Often in years like this one, whoever can protect their home court best ends up being the champion so keep an eye on those records at home.

Here are a few players who are playing particularly well lately.

Munnerlynn has been a little bit of an enigma for the Lions before, exploding some nights before disappearing in other matchups. But he seemed to gain a lot of confidence with a go-ahead 3-pointer against Western 10 days ago and transformed that into an explosive 29-point effort against Fluvanna County that included a monster dunk in transition. If Munnerlynn keeps playing at this level, it’s only going to make the Lions who are unbeaten in the district that much tougher to defend.

There was a big question mark about where Albemarle’s offense would come from going into this season and night in and night out Morse has provided the answer. Morse exploded in the fourth quarter against Western Friday for 11 points after being held largely in check for three quarters by the Warriors and lifted the Pats to the win in an 11-point rally fueled mostly by Morse offensively. He followed that up with 19 points, 10 rebounds and four blocks Monday in AHS’s win over Monticello.

Only four local players are averaging a double double and Lefkowitz is one of them (Monroe’s Martha Apple, Western’s Caity Driver and Covenant’s Ella Dalton are the others). She gives the Black Knights who were loaded at guard coming into the year, a reliable player on the boards, which is part of why Charlottesville is sitting atop the current Jefferson District heap with a 5-1 mark in JD play.

In a year with a ton of strong female freshmen across the area, Braxton has emerged as another part of that group, averaging 4.5 assists per game, good for second in the area. Braxton  has given the already potent Miller offense a shot in the arm, helping jump backcourt mate Olivia Wagner’s scoring average up over 20 points per game for the first time in her career. Braxton is a distributor first, but her 12.9 points per game force opponents to honor her shot too.

The basics: Every year, the Blue Ridge/Miller series — and it’s almost always more than the two games that are already scheduled with potential VIC and VISAA tournament matchups on the horizon — produces some of the most exciting basketball seen in the area. This first matchup will, as usual, pit a pack of future collegiate players against one another with bragging rights and early conference control on the line. The Barons come in at 14-3 with several big wins to their name and a six-game win streak with an average margin of victory of 30.9 points per game over that stretch. The Barons go at least 10 deep, so look for them to try and wear downa Miller squad that’s much more reliant on its starters. The starting guard matchup is fascinating as Michael Gray and William Lee tangle with Quadir Pettaway and Amir Nesbitt, with the Barons bringing a number of other big-time backcourt options into the mix too. Can the Mavericks — who won two straight games last week after falling to Eastern Mennonite — withstand the waves of talented Barons coming off the bench? Derrick Jones has also been finding a groove of late for the Barons, and he’ll be tasked with marking some electric scorers.

Key matchup: Blue Ridge’s bigs go toe-to-toe with Clarence Rupert. The Mavs’ big man Rupert leads area post players in scoring and posted 24 points and 10 boards Saturday against STAB. The Barons counter with height (Sasha Glushkov and Houston Emory) and strength (Andy Nwaoko) of their own in the paint. Can that combo and the Barons’ intense help defense approach help keep Rupert in check?

The line: Blue Ridge by 3. The Barons’ depth is the difference maker in this one.

The basics: If you like speed and you like guard play, have we got a game for you. In one corner, we’ve got Louisa’s duo of Jarett Hunter and Buck Hunter while in another Zymir Faulkner and Nick Motley are ready to run for the Black Knights. All four are extremely quick, all four are known entities and there’s an argument to be made that they’re the Jefferson District’ four best guards. Then you’ve also got sharpshooter Jake Bowling and utility man Isaiah Washington for the Black Knights while Mahlik Munnerlynn has recently taken a major step forward for the Lions. That’s a lot of electric guards who play in-your-face on-ball defense and can push the pace in transition. That may become a case of strength cancelling out strength which might make execution in the half court the difference-maker. In that case, it would come down to orchestrators Jarett Hunter and Motley, two of the area’s Top 10 assist producers at 4.1 per game each. This one should be fun.

Key matchup: Charlottesville’s Christian Stewart battles it out with Louisa’s Isaac Haywood. Stewart has provided the Black Knights with a reliable post option at 10.2 points and 7.1 boards per game while Haywood has done something similar for the Lions with 10.0 points and 8.9 boards per contest. Haywood is a freakish athlete who can jump out of the gym, so Stewart will have his hands full from that perspective, but whichever of these two can win the rebounding battle will give his squad a decided edge.

The line: Push. This one should be a thriller out in Mineral and both squads look very evenly matched.

The basics: The Eagles were recently ranked No. 7 in VISAA’s Division III and only lost in overtime to No. 1-ranked Eastern Mennonite. Covenant fell to ranked Division II foe Virginia Episcopal Saturday, ending a string of three wins. After taking on Fishburne Tuesday they’ll face a Tandem squad that’s 6-6 and could use a big boost in the form of a win here. It’ll pit first year Tandem coach Sam Dale, one of the top players in Covenant history, against the program he played for, an added wrinkle in what should be a solid matchup. Kobi Copeland and Dean Lockley lead Tandem in scoring with 21.0 and 16.4 points per game respectively, while Covenant hangs its hat on the defensive end and gets the bulk of its offensive production from Jonas Sanker, who’s average has jumped recently with big performances up to 22.3 points per game, leading the area in scoring. This has the potential to be a high scoring affair, but if Covenant can clamp down, that’ll majorly play in the Eagles’ favor.

Key matchup: Tandem’s post players contend with Nic Sanker. While his brother has been torching opposing teams on offense, Nic Sanker has been posting solid rebounding numbers with 6.8 boards per game while also playing good defense. That defense often comes against opponents he gives up some height too, but with Tandem’s roster more guard centric, this could be a chance for Sanker to go to work underneath. Tandem will counter with some height in Ford Scott and Matt McCollough but the could have their hands full if Sanker is his usual relentless, active self.

The line: Covenant by 6. Jonas Sanker has gotten red-hot recently and doesn’t appear set to slow down yet.