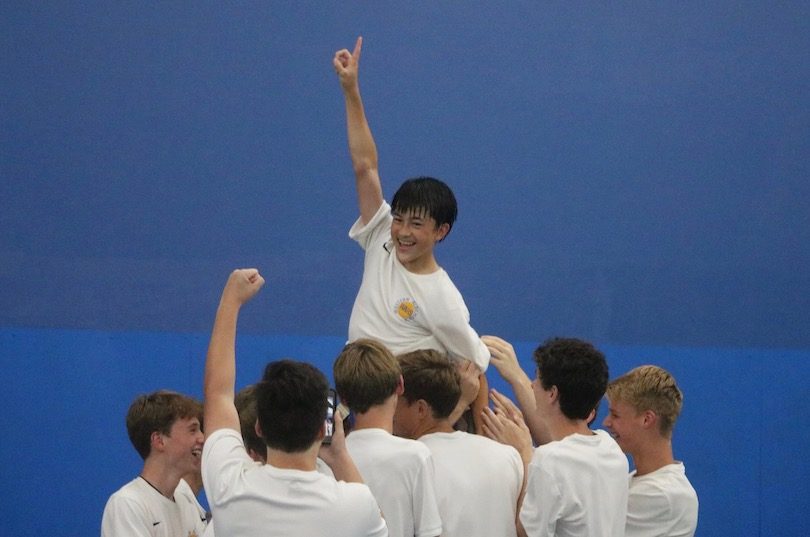 Being the No. 7 on Western Albemarle’s boys tennis team is a brutal spot to be in. It’s a difficult climb to get there in a program that is stacked year in and year out with top notch players, but trying to get into singles in the top six is even harder than the climb to seven.

For two years, that’s where Jake Selverstone sat. So instead of pouting or surrendering, Selverstone went to work.

“I did everything, I played a ton of tennis, I lifted weights, I ran, I got in shape I did indoor track just to prepare,” Selverstone said of the last two state titles. “I accomplished my goals and exceeded them. It’s a sense of self-fulfillment and it’s a good feeling.”

Saturday, Selverstone won 6-2, 6-4 as the Warriors’ No. 4, battling back from a 4-2 deficit in the second set to help set the stage for Western Albemarle’s third-straight state championship, a 5-0 victory over James Monroe.

“It felt really good to do this,” said Western senior Tommy Smith. “It’s been pretty amazing, these boys are lifelong friends for me, I’ll never forget any of the memories I’ve made with them.”

The Warriors were forced into a less-than-ideal situation with the torrential rain in southwest Virginia, playing what would usually be a four or six-court match at a single court at the Sun Tennis Center in Salem. That meant all eyes were on each individual match over a six-hour stretch starting with Gavin Segraves winning 6-3, 6-0 at No. 1 before Alex Ix rolled 6-0, 6-0 at No. 2.

Then Jack Tribble returned to the lineup after missing the state quarters and semis with an ankle he rolled in a pickup basketball game. The injury forced coach Randy Hudgins to direct sub in freshman Tobin Yates in those two rounds, who won both his matches. Tribble returned for his final high school match though, and wearing an ankle brace at No. 3, the senior picked up a 6-1, 6-0 victory.

“I was really afraid that I wasn’t going to get to play today,” Tribble said. “A threepeat isn’t something everyone gets to be a part of, you can’t take it for granted. I’m just blessed to be here. I woke up this morning and said let’s get it going.”

After Tribble came Selverstone’s war that he managed to fight back and win, setting the stage for freshman Damien Heller-Chen at No. 5 to close out the win. Heller-Chen rolled in the first set 6-0 and then clinched the match with a 6-1 finish in the second set, setting off a celebration that included Heller-Chen being hoisted onto the players’ shoulders.

The court situation prevented No. 6 Simon Rader, a four-year starter, from getting a chance to play, but the team’s usual closer handled it well, enjoying his third-straight state title as one of three starters on all three squads along with Ix and Tribble. Tribble and Rader clinched the first title in the run with a doubles win in 2017 and Rader finished off the 5-0 win over York a year ago for the second championship.

“Unfortunately this year I didn’t get the chance, but it’s great seeing our team play so well,” Rader said. “I think we made the most of it, we were out here on the court next to this court, providing the energy. I think we did a good job bringing that to the match.”

The team championship helped secure a sweep of the Class 3 singles, doubles and team crowns this week by the Warriors, with Navy-bound Segraves winning the singles before teaming up with Ix to win the doubles championship.

“I just take it one match at a time, I haven’t had any really long matches this week so it has been pretty easy to conserve energy,” Segraves said.

That simplified approach worked and the Warriors are champions once again thanks to big-time talents up top and players like Selverstone who are willing to put in the work to make the bottom half of the ladder just as stout as the top.