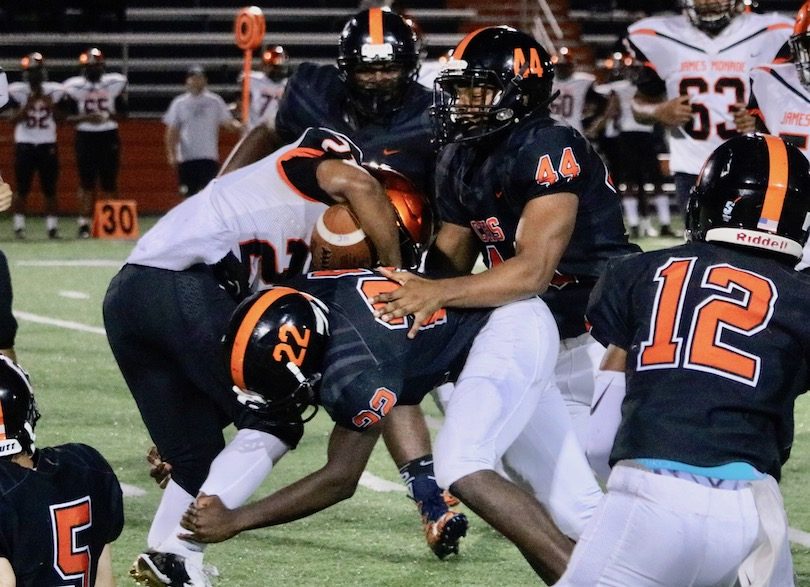 Charlottesville’s tough non-district slate may have yielded an 0-2 record out of the gate after Thursday night’s 43-7 defeat at the hands of James Monroe (Fredericksburg), but the lopsided final hardly reflected a competitive first half.

“Effort-wise, all night we played great; first half we executed a little bit better,” said Charlottesville coach Eric Sherry. “We left some points on the (field), I thought, but we had some momentum.”

The Black Knights rolled up 167 yards in the first 24 minutes, surpassing the full-game total JM’s defense allowed in their week one win. Senior quarterback Tamarius Washington accounted for 64 yards, including a 26-yard completion to convert a third-and-15 and a 25-yard scamper, Charlottesville’s longest of the night. Junior Jaleom Adams-Mallory, who stood out on the defensive line last week and is listed as a tight end on offense, saw significant time in the backfield and led the squad with 10 carries before the break, tallying 49 yards and a touchdown.

Miscues on special teams and lapses in the defensive secondary enabled JM to build and hold the lead. After the Jackets went up 7-0 after a methodical 11-play, 54-yard drive, Charlottesville fumbled on the ensuing kickoff return and gave JM a short field to double their lead by the end of the first quarter. Senior Jawuan Fauntleroy tallied both scores on runs of 4 and 6 yards.

When Adams-Mallory’s 2-yard plunge capped a nine-play, 60-yard drive by CHS midway through the second quarter and cut it to 14-7, JM needed just one play from scrimmage to restore their margin. Junior quarterback Aidan Ryan hit senior Tyler Whitman for an 80-yard catch-and-run touchdown.

“We watched film and saw their secondary wasn’t their strongest suit, so we wanted to take some risks and throw the ball,” said Ryan, who completed 9-of-15 passes for 182 yards whle also anchoring the Jackets’ defensive secondary at free safety and handling kickoff returns. “On that play, I didn’t have anything on the original. The corner was playing at five yards on the hitch route, so I rolled out and Tyler made a great play and adjusted to the ball. I put it over his shoulder and let him do him — he’s an athlete.”

Unfortunately for the faithful at Theodose Stadium, it was more of the same after the break, compounded by attrition due to injuries. By game’s end, four different Knights had seen action at quarterback. Meanwhile, JM quickly expanded its 21-7 lead as Ryan fielded the third quarter kickoff and took it 90 yards to the house; a baffling occurrence for CHS coaches who thought an onside kick attempt had been dialed up.

“We preached in the locker room that we needed energy coming out, so I just decided to be that spark plug,” Ryan said.

After Gary Jackson spelled Washington behind center during the Knights’ first offensive series, a backfield fumble was lost at midfield. As field position tilted against Charlottesville in the third, JM’s next points came again via special teams when a snap sailed high over the Knights’ punter and through the endzone.

JM freshman Tahj Smith took over at quarterback in the second half as Ryan shifted out to receiver, and both were impressive. Ryan made two receptions for 41 yards, taking his all-purpose total well over 300, and Smith found Dimario Brooks for a 25-yard touchdown midway through the fourth quarter.

“Our plan is to have Tahj come out and play every game, [a few] series, because Aidan’s so tough at receiver,” said JM coach Rich Serbay, as Smith finished 4-of-9 for 85 yards. “He’s going to be a real good quarterback.”

The Knights managed just 32 net yards in the second half, and none through the air.

“We went to the 4-2-5 and experimented with some things, trying to get our feet wet,” Serbay said. “We only have one senior at safety, so they’re working hard and getting better. George Coghill and Kenton Griffin do a great job at coordinating it. Our defense is going to carry us and be our hammer this year.”

Adams-Mallory finished with 65 yards on 13 carries, while senior Isaiah Washington led Charlottesville with 78 yards on 17 rushes.

CHS returns to action for its first Friday night contest when it hosts Class 5 foe Harrisonburg (0-1, vs Handley on 9/6) next week. 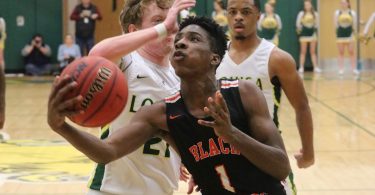 Charlottesville’s Christian Stewart has emerged as a critical part of what the Black Knights do...