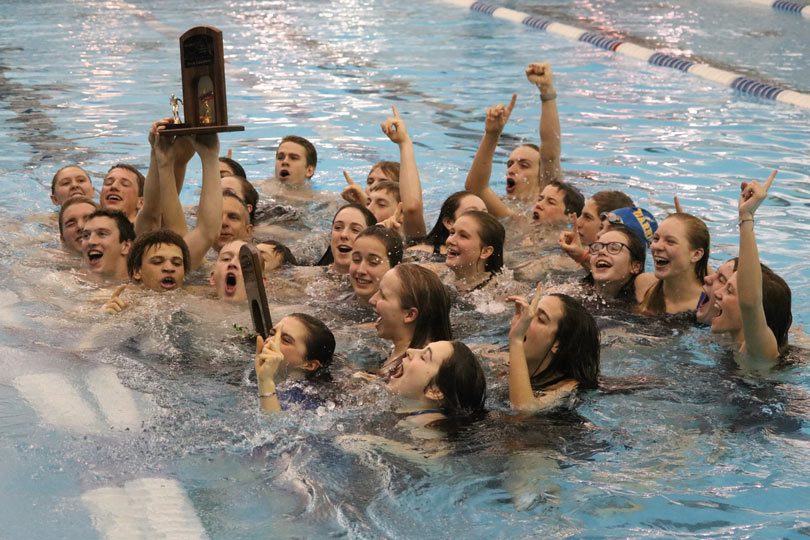 Western Albemarle junior Stephane Karp knew how special the moment was. To be swimming next to his teammate August Lamb in the 100 freestyle as Lamb set his second state record of the day and the Warriors went 1-2-6 in the race just…mattered.

“August and I race all the time at practice and obviously he’s so much better than me but it’s just so fun practicing with him and racing together at states,” Karp said. “That’ll be my last high school race with him and we go one and two, I couldn’t ask for anything better.”

It also poured gasoline on an already roaring fire for Western Albemarle’s boys swim team who at that point was about halfway through an incredible show of dominance, scoring 503 points to win the Class 3 state championship.

“We’ve really come together as a family and you get so much more hyped after everyone does well,” Karp said. “It’s not even about you, it’s about how your teammates do, it’s a great feeling.”

In the effort to earn back-to-back titles for the first time in boys program history, the Warriors outpaced the field by 260 points with York coming in second at 243. If York and third place Hidden Valley had teamed up for 461 points, they’d have still missed out on a title by more than 40 points.

On top of that dominant effort, Western’s girls managed to squeeze out their own state title, topping York by 10 points with 338.5 to York’s 328.5, giving Western a sweep of the team championships for the first time since 2016. It’s also the girls and boys combined program’s 10th state title in the last 10 years, seven from the girls and three from the boys.

“It’s not really a girls team and a boys team, it’s the Western Albemarle swim and dive team,” said Western coach Dan Bledsoe. “They push each other and support each other, it’s not two split squads, it’s two squads that are together.”

Lamb was responsible for a ton of points in the meet, with Lamb winning the 200 and 100 freestyle events while setting Class 3 records in both races. Lamb also swam legs of both the 200 free relay squad that set a new Class 3 record and the 400 free relay that did the same. Four swims, four state records, four state titles for Lamb on an incredible night.

“We really gave it our all,” Lamb said. “We’ve only does this once before (win both the girls and boys titles) and to see the emotion and the joy that’s coming from (the girls) side of the team just adds to the excitement on the boys side and the team in general.”

Noah Hargrove wasn’t far behind, winning both the 200 IM and the 500 free while also swimming legs of the 200-free and 400-free relays that set state records. Lamb and Hargrove winning those events and staying fresh enough to close the deal was in part aided by his teammates. The Warriors’ depth allowed them to swim entirely different teams in the preliminary relays in the morning, allowing Lamb and Hargrove to swim just their individual events. That left them more fresh for the night session where the Warriors were off the charts from the moment they jumped in the pool.

“We have a luxury of depth that no other team can have at the 3A level, in terms of a school our size and even on the 4A or 5A side,” Bledsoe said. “We did complete line changes for evening swims and there’s just nobody who can do that.”

Twenty different individual swimmers and three relay teams scored for the Warriors in an incredible show of depth.

A dominant performance in the relays gave Western’s boys’ effort a lot of juice as they won both the 200-free and 400-free races in record times while taking second in the 200 medley.

There are a few different ways to win a swimming team state title but they usually fall into two categories — teams that win with depth and teams that win with top-end talent. While the Western boys somehow found a way to do both Saturday, the Western girls won in one of the most extreme cases of depth prevailing in recent memory. The Warriors didn’t win a single event but 16 different swimmers scored in individual events along with the three relay teams that placed fifth in the 200 medley, third in the 200 free and second in the 400 free. That final finish, the runner-up in the 400-free relay, was critical with second place York winning that event. A lower finish could have allowed the state title to slip through Western’s fingers.

“It was really special especially for us seniors because we won our freshman year and haven’t been able to since,” said Western captain Katie Herndon. “It was just really emotional, especially with how many girls we had swimming tonight.”

The highest individual finish for the Warriors Saturday — Carey D’Arte placed third in the dive earlier in the week as well — came from Sophie O’Donnell who took third in the 200 free and also added a fourth in the 100 free.

“This team just works so hard every single day, everyone just put in their best effort,” O’Donnell said. “We talked last night about how it doesn’t matter if we win, but we just want to be there for each other and know that we’re swimming for Western.”

“The girls won because we have swimming and diving, the diving points added up to give us that cushion to take a little bit of the pressure off our swimmers,” Bledsoe said. “We have a lot of younger swimmers, not super experienced so having that buffer was really important.”

Four points, here, two points there, one point here — they all added up to give the Warriors the win on the girls side.

It’s also another mark in what has become a full-tilt swimming and diving dynasty. Ten state titles for a program in 10 years is a wild accomplishment, a rare feat, a product of paying attention to all the little things. Bledsoe knew four events before the closing 400 free where the Western girls needed to place to hold on for the title, then the Warriors went out and executed.

It has clearly become something special, as O’Donnell said, to know they’re swimming for Western.