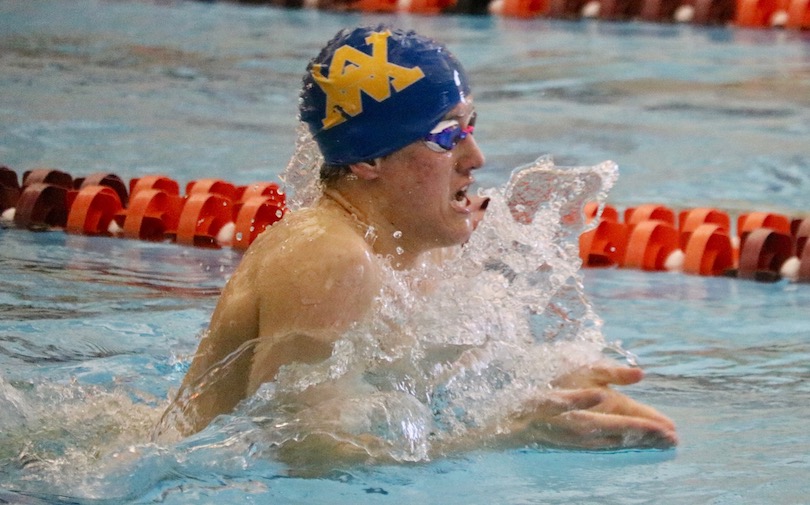 After making your way through the entryway to the building at the center of Crozet Park, you weave in between a huge metal compressor and some other pool-related machinery, then you squeeze through a narrow opening between the dome that covers the park’s pool during winter and a storage structure.

Then you’re there, under an awning that during the summer families drop their towels and beach bags on benches before jumping in the pool. That’s where Western Albemarle’s swim team’s own Rocky-like, makeshift workout station centered on a trio of pull-up bars surrounded by old deck mats to block out the wind and cold.

Rep after rep, the Warriors are putting in work. The Warriors aren’t just doing run-of-the-mill pull-ups. They’re breaking out heavy duty chains, kettlebells and medicine balls. They’re closing out their dry-land workouts led by assistant coach James Hargrove each week by putting in some serious in-season work that doesn’t look anything like swimming.

“People are really improving, you can really see the growth and how we’re building up our strength,” said Western girls captain Elke Beaumont. “It’s our little shack but we’re used to it.”

The little shack is the source of not just physical development, but team development, forging a bond for the Warriors each time they make their way into that space.

“It’s just a lot of fun when you have all your teammates there just encouraging you,” Sam Johnson said. “Not only are we building ourselves physically, but we’re connecting team-wise and getting to know each other better. We’re becoming more of a family.” 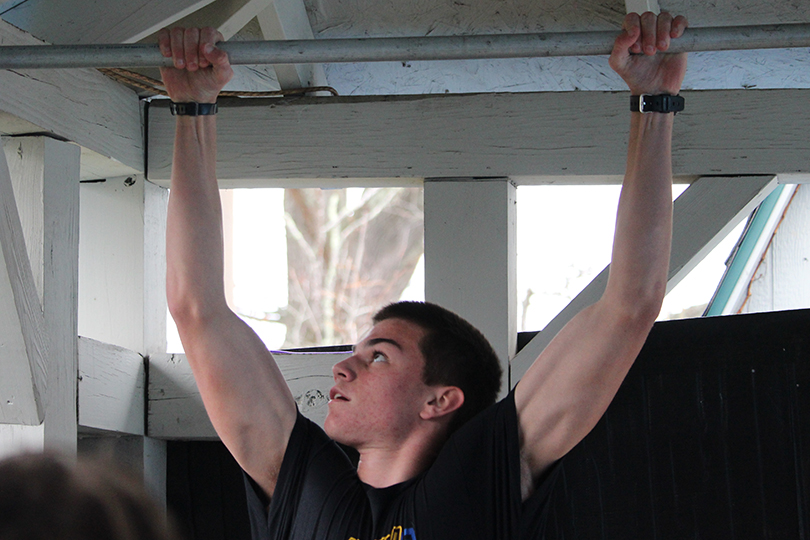 Western Albemarle coach Dan Beldsoe has been utilizing that formula for years to turn Western swimming into a state powerhouse. He’s employed dry-land workouts to forge a team in a sport that can be so individual on top of the fact that many year-round swimmers often get in their pool work away from their teammates. It has paid off in a big way, creating a team culture in a sport where that can be a daunting challenge. The program has become a sort of melting pot for students from all over the social landscape at Western.

“This swim team has so many people from different backgrounds and cliques and this team is a way to say, hey, none of that matters,” Sam Johnson said. “It doesn’t matter because this is your family. It’s just something really unique.”

That uniqueness manifests itself in a ton of different ways when the Warriors come to the pool too, where Western’s presence can be felt in several different ways beyond the times they’re posting on the board.

“It’s not just any single thing but every single meet we have, the last relays, we cheer them on,” Noah Johnson said. “No matter what race it is, someone is up, cheering. I think it’s just a testament to how close we are. We have a lot of team spirit here, we take it really seriously.”

The culture has also strengthened, developed and evolved that way because each group of leaders have taken it upon themselves to try and ensure that each swimmer that comes through the program has an experience similar to what they’ve had, which was particularly challenging during the height of the pandemic. Back when Western senior Megan Life was a freshman, senior Katie Herndon, one of the premier keepers of Western swim’s culture over the last decade, took Life under her wing.

“She drove me everywhere, I really looked up to her and I still talk to Katie now, it’s really special,” Life said.

Life paid that forward this year, making sure she passes on what she picked up from Herndon, helping push forward the program’s best qualities by adopting Audrey Miracle, a freshman swimmer.

“Being the senior it has been really special to take in a freshman and say, hey, this is what this team means and this is how you can be a part of it,” Life said. “That culture of lifting each other up really matters to me.” 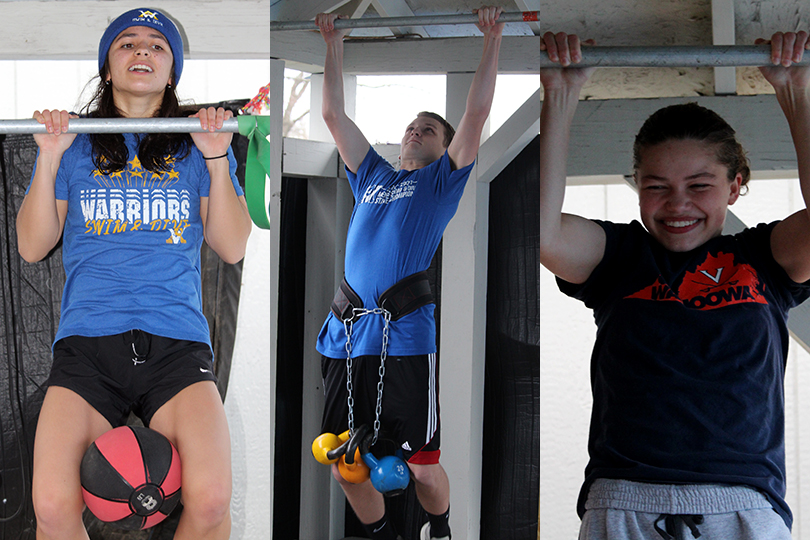 That culture helped fuel Western’s approach to the return of the highly-anticipated Ben Hair Swim and Dive meet Tuesday night that is now run like a championship meet with entry limits per event. Since the Ben Hair meet is one of the few times where locals get to face off against one another on a big stage in front of a big crowd and all swimmers missed that a year ago, Western has opted to try and get everyone in the pool with those limited entries, giving everyone on the roster a chance to experience swimming at UVa in front of what’s sometimes a bigger crowd than the state meet.

“We want to get everybody the opportunity to swim so that they know at a meet that this is what they can expect and these are the expectations that we have of them,” Noah Johnson said. “We want to have that bond with everyone at the meet.”

Western’s boys squad is looking for a fifth-straight state title, though they’ll be doing it in Class 4 this year with a particularly challenging region ahead of them. They’ll attack that challenge with  an exciting blend of experienced swimmers and incredible young talent. Three seniors, Peyton Wray and diving brothers Trevor and Wade Donalson graduated off last year’s Class 3 state championship team and their loss will definitely be felt. But now the Warriors will lean on Sam Johnson, Noah Johnson, Matthew Heillman, Anthony Garano, Jackson Schundler and Jack Smith who all scored critical points in the state meet a year ago. Sam Johnson was the runner-up in both the 100 butterfly and the 200 freestyle last season and Heilman finished second in the 200 IM and fourth in the 100 breaststroke. The Warriors’ relays were particularly strong a year ago, with a state title swim in the 400 free relay, a runner-up finishes in the 200 free and 200 medley relay.

“COVID actually helped a lot because it was an activity they could do, club swimming stayed together during that, they started up relatively soon after COVID hit because they can beat outside,” Beldsoe said. “They stayed more together so this boy group has really blossomed.”

Then there’s the younger group, sophomore Jonathan Alexander and a group of freshmen led by Thomas Heilman, Travis Hitt and Richard Wang. All four have the potential to score in multiple events at the state meet and Heilman is a rising star on the national swimming scene, having broken 13 age group records in a recent three-meet stretch on the club circuit.

On the girls side, the Warriors also have several swimmers who are back in the mix including junior Julie Addison who was a top eight finisher in the 200 IM and 100 back and Beaumont, a freestyler who’ll also be in the mix for the top eight at states. Into that mix they add junior Spotswood transfer Sophia Ma, who should be a top eight contender in the 100 breaststroke at states and sophomore Grace McCardle, who recently swim the second fastest 100 free in program history at the Hanover Invite. Freshman Lucy Nicholson and sophomore Elle Schundler are also versatile swimmers who could be a major factor in the IM and Emily Mandell is back as a diver.

Even outside those top swimmers though, the Warriors have found a way to create an inclusive program, a place where improvement and building from the ground up no matter where you start, is celebrated. Where unity and lifting one another up is prioritized over who’s the fastest in the pool.

Each year, Bledsoe makes a point to tell his leaders that while it’s his program, it’s their team. It’s their chance to put their own personal stamp on this edition of the Warriors. With those leaders finding a way to embrace a ton of new faces and help reinvigorate the program after a pandemic-impacted, shortened season a year ago that didn’t allow for all the program’s usual camaraderie and team-building, it’s clear that the Warriors are in good hands.

They’ll keep building and producing, one pull-up at a time. 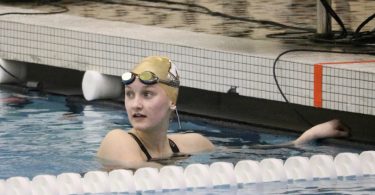 Western Albemarle’s boys basketball team was handed their first loss of the season in their last...