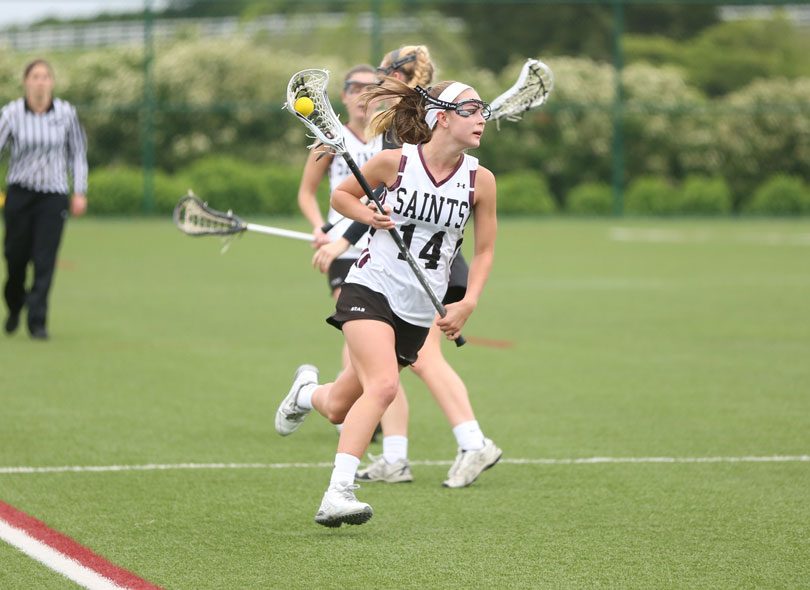 Things looked so good early in the second half for St. Anne’s-Belfield. Playing in the VISAA Division 1 quarterfinals against LIS nemesis Collegiate, against whom, nothing ever comes easy, the Saints got a four goal lead early in the second half and had not trailed in the contest. But with just over 10 minutes to go, the hosts were trailing for the first time. Thanks to a 3-0 run that started with six minutes left to go along with the STAB defense hanging on for dear life in the final two minutes, the Saints picked up a 12-11 win to earn a bid to the state semifinals.

“We played with heart and we had to,” said St. Anne’s coach Mary Blake. “But that’s what this group has done all year. It’s hard playing a team a fourth team and it’s always close. You know what though, we’ve been through so much graduating so many great kids from last year. For me, this has been such a major accomplishment. This group just continues to exceed all the goals I had for them coming into the year.”

After the Cougars reeled off a 6-1 run to go up 10-9, a spree where Collegiate simply scored on lengthy possessions and won draw control after draw control, STAB senior Annie Cory drew a foul and an open look at the net. She hit the equalizer.

“I was thinking about going low to bounce it and that had been working most of the game because of the slick turf,” Cory said. “It’s unpredictable for the goalie and we talked about it in practice that shooting low throws them off. So you’re thinking of going low but really it was just making sure it went in the back of the net.”

Just under a minute later, McKenzie Maurer gave the Saints an 11-10 lead with 5:13 to play. The Saints picked up a huge insurance goal 62 seconds later with Cory striking again. And for the next four minutes, St. Anne’s went to work on the clock. Collegiate got to within a goal with Jordan Marcus striking with two minutes to go. The Saints then tried to run down the clock, turned the ball over only to have Cory earn a ground ball with 30 seconds remaining. STAB tried again to run out the clock but after a stoppage and an illegal stick ruling with eight seconds left, Collegiate got the ball deep in its own defensive end. However, that was not enough time for the Cougars to get a shot on net which wrapped up the win for the third seed in the tournament.

The first half was back and forth with Maurer and Cory making it 2-0 early and the Cougars catching up to make it 4-3 with 4.:33 left in the frame. A goal from Claire Schotta and a pair from Cory gave the Saints a 6-3 lead. The two teams traded quick goals to finish the first and make it 7-4 going into the break. Only 18 seconds into second, Maurie struck and put her team up 8-4.

It was there though that Collegiate, behind Jordan’s strong showing, started winning draws, converting and keeping STAB on its heels. The 6-1 run gave the Cougars their first lead of the game and set up the dramatic finish.

“They had a great draw control on Thursday when we played them (in the LIS finals),” Blake said. “We were missing some players and so I couldn’t change things up much. But I thought we were fantastic at the end (of the second half).”

Corey and Maurer each had five goals. Maurer had an assist as well. Elizabeth Carden had a goal and an assist. Goalkeeper Brittany Shoeb finished with 13 saves in net.

Defensively, the Saints had to do without one of their top talents in Mailyn Steppe who missed the game because of injury. But Maddie Hunter and Neely Craig made a huge difference in clearing the zone on their own on more than a handful of occasions to help alleviate things.

“Maddie and Neely, both of them, when they get the ball they make such a difference,” Blake said. “They literally can run past anyone on their own. It’s huge. In some respects it’s tough because we don’t know what to do because they’re going so fast, running by our own players, but it’s something when you can run 75 yards down the field. They can do it without throwing it and so they take out the risk of turning it over on a pass.”

It was the fourth meeting between the two LIS perennial powers. The Saints won three of the four. The only game not decided by one goal was the April 29 meeting that STAB won 13-9.

“We’ve played (Collegiate) so many times since I was on the team as an eighth grader,” Cory said. “We’ve played in a lot of 12-11 games and been on the wrong side of that too, so this one meant a lot for the seniors. Thank God we don’t have to play them again.”

STAB (17-4) will play Bishop Ireton in the final four on Friday at the University of Richmond.