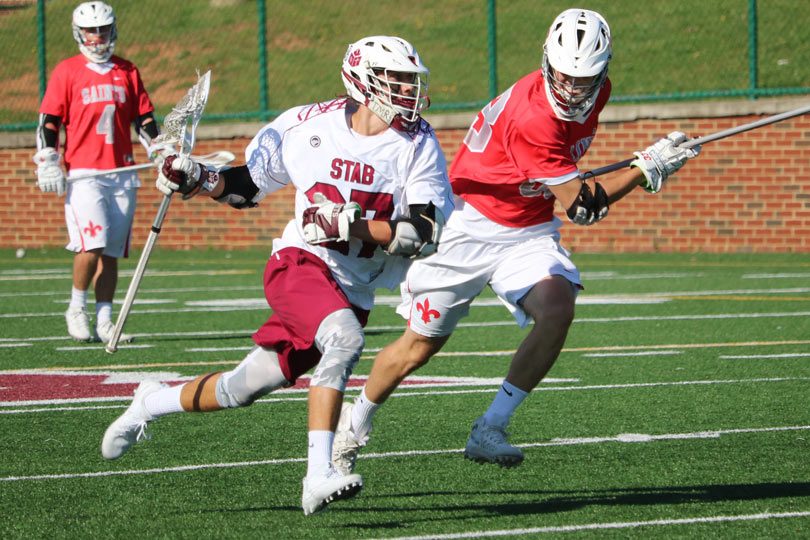 “I dodged hard down the alley and I saw the slide coming a little late and once I rolled back they just collided,” Robertson said. “After that I checked to see if anyone was coming out and nobody was coming back out so I just stepped in and took the shot.”

That simple explanation doesn’t do justice to the senior’s second quarter move that sent two St. Christopher’s defenders crashing into each other. It wasn’t a back-breaker, because it was too early for it to be any kind of dagger. But it was a huge goal to finish the first half and a big part of a decisive 10-goal run that stretched over three quarters and helped STAB wrap up an 18-7 victory over St. Christopher’s in the VISAA Division I quarterfinals.

“Joe never ceases to amaze me on a daily basis,” said STAB coach Bo Perriello. “The kid is just phenomenal — his leadership, his work ethic but then again what he does on the field. His work ethic and his desire to see this team succeed is just remarkable. Without question the best player I’ve ever coached.”

That’s high praise for Robertson considering some of Perriello’s past charges.

“Warranted in this case though,” Perriello said. “Warranted.”

As usual, Robertson had help on the offensive end. Connor Shellenberger poured in a game-high six goals, nearly outscoring St. Christopher’s on his own. He buried those six goals on just nine shots as part of an efficient performance. Robertson, Chad Combs and Emmett Barger also contributed to that offensive efficiency as all three players’ hat tricks came on just four shots.

The Saints’ offense just has so many pieces and options that it becomes particularly difficult to stop once it gets going. Robertson scored less than 30 seconds after the first faceoff, making it clear that the offense was in gear from the opening whistle.

“I’ve been coaching here for 29 years and I’m from a part of the country in Syracuse, New York that’s an old hot bed but that offense is as good as any high school offense that I can remember,” said St. Christopher’s coach John Burke. “Not only do they work hard to get ball, they work hard off the ball, they shoot really well and they’re unselfish. That’s a perfect storm.”

Burke’s squad refused to go quietly despite STAB’s hot start, and got off to an excellent start in the second quarter, reeling off two quick goals to cut the STAB lead to just 6-3. But St. Anne’s’ defense clamped down after that, holding St. Christopher’s scoreless for most of the second quarter and the entire third quarter. St. Christopher’s broke the drought with 9:37 left in the game.

“It was all just talking, we’ve had this really big thing with communication and how that it’s playoff time, all our gears are just clicking,” said STAB senior defender Juwan Woodson. “We’ve come a long way as a defense and now we’re playing as a cohesive group.”

If the defense can continue to hold its own during the state final four, it’s going to be a huge boost for St. Anne’s. They’ll get a major test in the state semifinals Friday against Norfolk Academy, a squad that edged out STAB for the Prep League title thanks in large part to a 16-15 victory in Charlottesville.

STAB keeper Jeffrey Perkins, who was named All-Prep League earlier in the day, had six saves on the night. Most of those saves came at critical times as he continues to step up in his first year as a starter.

“Obviously the best defenses you still break down and it’s just good to know that even when it does happen he’ll be there to make those hard saves,” Woodson said. “Goalie is a hard job for anybody and to have a great keeper like Jeff in goal is just terrific.”

Robertson finished with six ground balls and three assists to go with his three goals. Shellenberger added a trio of assists and Barger also had three assists. Michael DiGiacomo and Thomas Harry had four ground balls each as part of that sterling defensive effort and Combs picked up three ground balls of his own. DiGiacomo also had a fastbreak goal that helped extend STAB’s lead in the early going. STAB held a 15-9 advantage on faceoffs that helped charge that big run in the middle of the game.