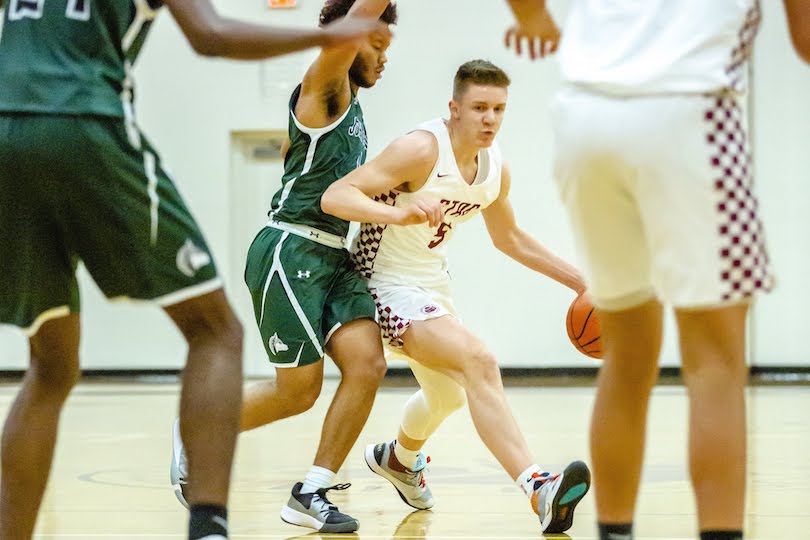 As is the story with most season openers, STAB’s 2019-20 debut against St. John Paul the Great Catholic was full of ups and downs.

The Saints had no problem scoring the ball, shooting 60 percent from the field, and an impressive 50 percent from beyond the arc in an 81-76 victory over SJPTGC.

The productive night on offense enabled Saint Anne’s to reach the 80-point plateau for the first time since January 5th of last season.

The shots were falling, sure, but the Saints also turned the ball over 20 times, which allowed the visiting Wolves to nearly erase a once 15-point second half deficit in the final moments.

In the end though, with a roster full of underclassman, STAB was able to rely on one of its few seniors to carry the day.

Clinging to a two-point lead with under a minute to play, Nic Reese came up with a timely defensive stop and made some clutch free throws on the other end to help seal the win.

“As coaches we talked about how with a younger team, you’re going to look very good at times, and sometimes, it was going to be really ugly, and I think we saw that from the beginning,” STAB coach Damin Altizer said.

Reece stuffed the stat sheet in the win, scoring 15 points, pulling down seven rebounds, and dishing out four assists. In the final minute of the game, the senior personified what Altizer was talking up with the up-and-down feel of the game.

After preventing the Wolves from tying or taking the lead, Reece stepped to the foul line with 13.5 seconds left.

The senior clanked the front-end of a one-and-one off of the front of the rim. The missed one-and-ones were a huge reason as to why the Wolves were able to get back in the game, but this time, Reece dove onto the floor, secured the loose ball, and called a timeout to maintain possession.

Reese was rewarded for his hustle play with several more attempts from the line, and he delivered for his team this time around, which slammed the door on the visitors from up north.

“The theme for the game was control the controllables,” Altizer said. “Senior Nic Reese goes to the line, misses a free throw and then goes and dives on the floor. That’s what he controls. He missed the front end, but then he dives on the floor and make the free throws to finish the game out.”

STAB seized the lead for good with 2:56 left in the second quarter following a layup from Eli DeLaurier. But as Altizer noted after the game, sometimes it was smooth sailing, and other times, it was nervewracking.

STAB heled a 37-32 advantage at halftime, and led by as many as 15 points late in the third quarter.

The Saints appeared to be taking a 14-point lead into the final quarter when SJPTGC’s DJ Slaughter drilled a prayer from beyond the halfcourt line.

The buzzer-beater appeared to have woken the visitors up, as the Wolves opened the fourth quarter on a 13-4 run in less than four minutes, to trim STAB’s lead to just two points. St. Anne’s flirted with disaster on a number of occasions, including turnovers and missed free throws, but in the end, the Saints did just enough from the foul line and the field to escape with the win.

Speaking of Taylor, the junior displayed a few new tools to his offensive arsenal in the win.

Though he feels mighty comfortable around the three-point line, Taylor is on a mission this season to prove that his game can extend into the paint as well.

On Tuesday night, the Wolves found this out the hard way.

With his team trailing by seven and on the wrong end of a 17-8 run to start the game, Taylor got a rare transition opportunity, and promptly flushed down a one-handed jam.

The dunk represented Taylor’s first bucket of the night, and led to a buzzer-beating three-pointer, which trimmed STAB’s deficit from seven to just two in a span of 35 seconds.

Taylor went to the air again in the second quarter. The 6-foot-6 sophomore took a beautiful pass from eighth grader Chance Mallory for an alley-oop, which brought the crowd to its feet, and capped a 14-3 STAB run just before halftime.

“So many guys talk about him being a shooter and we talk to him about that just being a huge insult to him because he’s so much more,” Altizer said. “Obviously, he was great offensively, but then he took the charge there at the end to kind of seal it. He’s great in all facets. He’s a great scorer, he had several assists and he’s just as good as advertised and so much more than a shooter.”

The DeLaurier brothers played big roles in the win, with both Ethan and Eli chipping in 10 points and nine rebounds.

The Saints will take on St. Stephens and St. Agnes in the first game of the Sleepy Thompson Tournament on Thursday night.