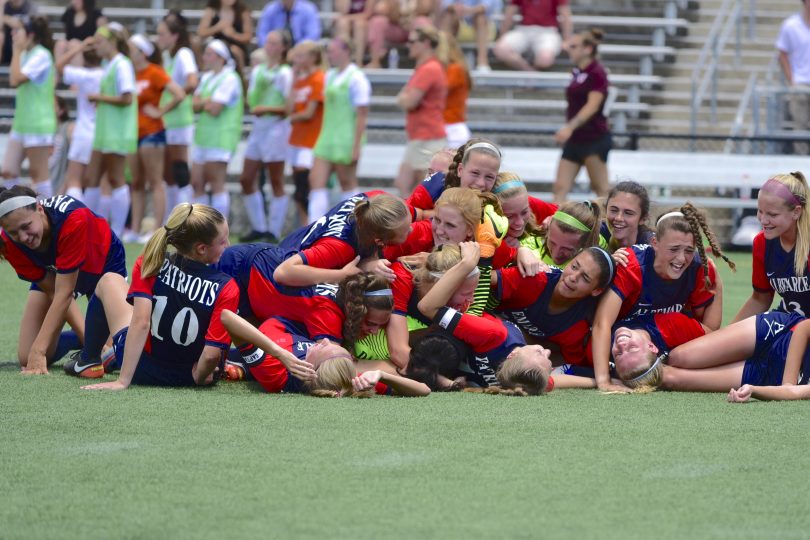 There’s a reason players, coaches and fans get a feeling that theirs is a team of destiny. Separating two really good opponents always seems to come down to one crucial moment. And sometimes that play unfolds just a little too perfectly. With a minute left, the ball just happened to find the foot of Albemarle’s two senior facilitators, Brooke Bauman and Hannah Eiden and one of its senior closers. When Leticia Freitas finally got the pass on her foot, she finished and Albemarle simply had to burn out the last 50 seconds of the second half to before celebrating the program’s first ever Group 5A state championship with a 1-0 win over Mountain View.

“We stuck to us, stuck to the course,” said Albemarle coach Amy Sherrill. “We were relentless in everything and go 80 minutes and get the goal in that last minute — it speaks to our kids and how they believe in us.”

While the first half was steady but cautious back-and-forth between the two, the second half was like so many with Albemarle dominating the time of possession battle and playing the bulk of the game in enemy territory.

“We did a great job of possessing the ball and playing through the heat,” Sherrill said. “I thought we were 300% ready for this game. It was great warm up. We had a great night last night. We were ready to go.”

The struggle for the Patriots in the second half was getting a shot on goal as everything seemed to sail wide. With 17 minutes to go, Albemarle had a corner and melee in front of the Wildcats goal but just couldn’t muscle a shot through. With 5:35, Bauman delivered a strong shot but goalkeeper Jennifer Bullers was able to corral the save. Sure enough though, at the one minute mark, the game defining play unfolded.

“Brooke Bauman flicked it on to me and (Mountain View) was really out of position, I had a huge gap and you could see it was wide open between the two defenders and I just slipped it in and Leticia made a great touch,” Eiden said.

For Freitas, watching it play out was interesting process to say the least, and certainly rewarding.

“I saw that space and I was just like ‘well why don’t I run over there’ and Hannah passes the ball and it just takes one touch to get in the back of the net” Freitas said. “I knew right then that that was it, we’d won, that it takes just one. It felt so nice. It was honestly a dream come true.”

The lone big threat for the Patriots defense in the second half came after Bauman was hit with a yellow card five minutes after the break to set up a free kick. That shot sailed high and wide of the net and from there, with the defensive midfield not budging, keeper Aiyanah Tyler-Cooper the defense in front of her had little trouble wrapping up the senior’s 40th career shutout. Tyler Cooper finished with six saves, four of them coming in the first half.

“That’s usually how we play — our second half is better, we send (the ball) up,” Tyler-Cooper said. “Our nerves are kind of out. The first ten minutes are probably the most important for us to get in, find our groove and settle down. The second half is breeze for us. We know what they’re going to do. We know how we have to attack.”

The real struggle for Albemarle after Freitas’ late goal was bottling the excitement for 50 more seconds and closing out the last 50 seconds. But the Patriots got it done and fittingly enough, the game ended with the ball right at the Albemarle bench where sidelined senior Anne Ridenhour watched eagerly.

“In the last 50 seconds I saw relentlessness from all my teammates,” Ridenhour said. “We knew we had to keep the ball up and we knew we couldn’t head to overtime.

Tyler-Cooper and the defense were mobbed and dog piled with the closing buzzer by a jubilant group. The Patriots fell to eventual state champions Mills Godwin in the final four last year. This year was different as Albemarle won all 22 of its games starting on March 20th and extending through the second Saturday in June.

“Once that 50 seconds was over we just rushed,” Eiden said. “It was crazy. It was awesome.”

“These seniors deserved this,” Sherrill said. “To stick with it through everything, the highs and lows and believe at the end the day, they’re undefeated, they rocked through all this competition. They’re the state champs.”