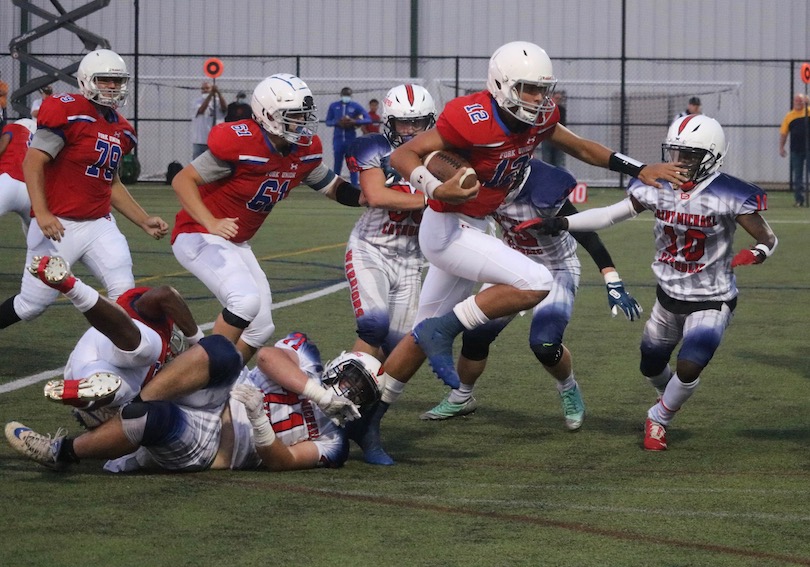 For two and a half quarters, the defending VISAA Division III state champions St. Michael the Archangel of Fredericksburg had Fork Union on the ropes. The Warriors’ Wing-T offense had packed enough ball control and enough surprises to build a 14-point advantage over the Blue Devils.

“I told (his teammates) to keep their head on straight — that we were going to come back eventually,” said Fork Union’s Cameron Wallace. “We locked in as a team.”

The Blue Devils locked in, got the stops they needed, and reeled off 25 unanswered points to beat St. Michael 32-21 in the season opener for both squads. It was the first football game played by a Central Virginia team since the COVID-19 pandemic started, and was marked by extensive mask usage on the sidelines but otherwise pretty normal football.

Fork Union’s top returners played a big role in the late surge, with V’Jon Hampton piling up 127 yards on 12 touches and quarterback Alex Williams accounting for four touchdowns, two on the ground and two through the air. Hampton took advantage in a big way as the Blue Devils wore down St. Michael down the stretch.

“The offense really just fed off my energy — I try to generate energy so that they can get into a groove,” Hampton said.

That energy started humming in the third quarter. Trailing 21-7 midway through the third, Fork Union got moving with a touchdown throw from Williams to Dominic Julius, set up by a poorly timed personal foul by the Warriors. The Blue Devils’ defense took things up a notch on the next drive, and Hampton made a big play snuffing out a screen but a late hit call on Fork Union gave St. Michael a reprieve.

No matter though — Williams stepped up with a sack two plays later that put the Warriors well behind the sticks. The Blue Devils’ quarterback broke out with his work on offense last year, but he’s clearly not to be overlooked on the other side of the ball.

“I think Alex is a very, very underrated defensive player,” Hampton said. “Teams are going to have to worry about him.”

That sack helped force a turnover on downs and Hampton immediately made the Warriors pay with a 37-yard run. Two plays later, Williams hit a wide open Miles Mayfield for a 12-yard touchdown to pull the Blue Devils within two at 21-19.

St. Michael went to work on the clock after that score, but got way behind the sticks again and eventually turned it over on downs again. Fork Union went to work again, with Hampton ripping off a 13-yard run and then a 19-yard bruising run. That set up Wallace, who powered in from 11 yards out to put the Blue Devils up for good at 25-21.

“(Hampton) stepped up for us on defense a lot and he got us down to the end zone,” Wallace said. “It was good for the team.”

Fork Union tacked on another score with 41 seconds to play to push the score to 32-21, with Williams powering in from two yards out for his fourth and final score.

Fork Union’s defense struggled with St. Michael in the first half, giving up small chunks on the ground and some bigger chunks through the air. At the break, St. Michael was up 14-7, thanks in part to a couple of interceptions by two Central Virginia natives now playing for the Warriors, with former Louisa County defensive back Jaquan Jones and former Charlottesville defender Gary Jackson each coming up with picks.

The lone bright spot in the first half was Julius ripping off a long kickoff return shortly after the Warriors went up 7-0. That set the table for Williams to score on a sneak and even the game at 7-7.

The Blue Devils now turn their attention to North Cross on the road in two weeks, and they’ll surely find a lot to work on from the tape Friday.

“This is a really good football team, they came to play football and we just came back on them,” Wallace said. “We should build off that.” 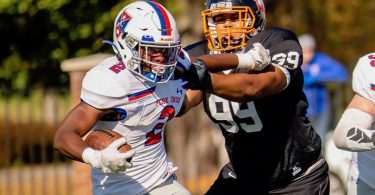