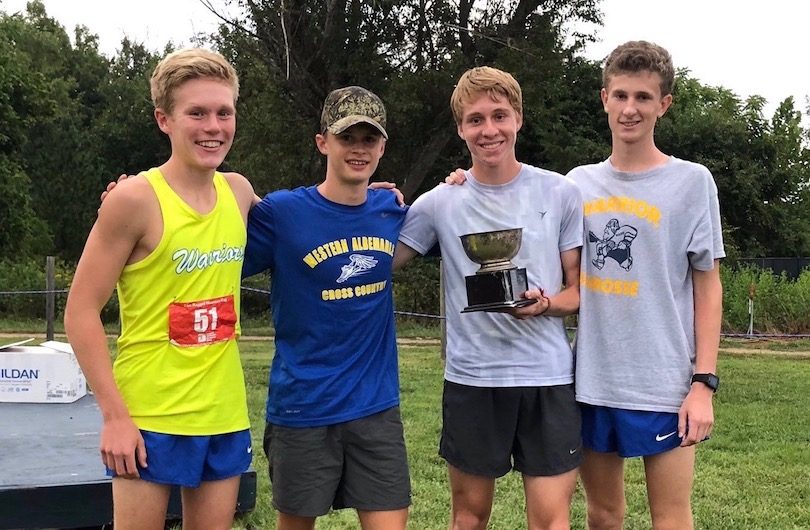 Hawkes’ leg of Western’s top relay ended with a time of 9:38, setting a new course record for the Ragged Mountain Cup relay. It also boosted the Warriors to a relay championship,

“It feels pretty great, and setting (the record) was a justification for what I thought I could do going into the season,” Hawkes said.

Jack Eliason wasn’t far behind Hawkes with a leg of 9:47, Will Bonner ran a 10:09 split, and the 11:47 posted by Thomas Kallen gave the Warriors’ top squad  the championship with a total time of 41:21. It was their seventh-straight team relay title. Eliason and Bonner also finished second and fourth respectively among the individual splits.

“It’s always nice to start the season with a win,” said Warriors Coach Lindy Bain, adding that the course record was a goal for Hawkes.

For Hawkes, a senior, it caps a pretty incredible run at the unique event that kicks off each cross country season.

“It felt great to get the team win,” Hawkes said.

That time put them just over a minute in front of Albemarle’s top relay that finished second as a team comprised of Will Mackenzie, Harris Naseh, JD MacKnight, and Stephen Smith.

As for the individual performances, the top ten finishers were dominated by the Warriors and the Patriots, as the two programs had eight of the top nine times.  The other split in the top nine came from Louisa County’s Branden Wood, who finished in third place with a time of 10:00. Rounding out the top ten was Orange’s Ethan Pettyjohn who finished the course at a clip of 10:36.