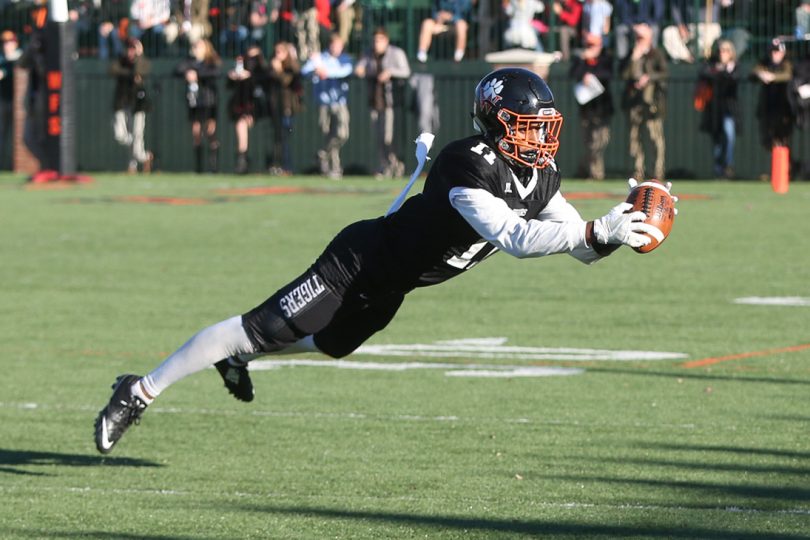 For his finale as Woodberry Forest’s football coach, Clint Alexander saved a trick up his sleeve — reaching out to the soccer program for a pair of players to try and perform as scout team athletes emulating Episcopal quarterback Seth Agwunobi’s agility. So Neil Walker and Carter Friddle ran scramble drills for the defense all week allowing the first team offense to focus on their task.

“I told those guys (Walker and Friddle) that we were going to contain this quarterback and were going to win this game because of them,” Alexander said.

While Episcopal was able to add a couple of last minute scores to make the margin more respectable, the story of the day for the Tigers was the defense shutting down Agwunobi and the running game en route to a 34-21 win to wrap up a win in the 116th meeting with the Maroon.

“It was the perfect day,” Alexander said. “Everything clicked like it was just meant to be.”

That was obvious out of the gate. The Tigers defense forced a turnover on downs to start the game and the offense responded with a drive to set up first and goal. From there a fumble at the goal line slipped through the Episcopal defense and Woodberry’s Khalid Thomas managed to recover it for a touchdown before the ball would have gone out of bounds.

“It was a lot of our guys and their guys in the end zone and I just stuck with the play,” Thomas said. “I kind of figured the ball would squeeze out and I just happened to be there in the right place at the right time.”

After a back-and-forth defensively, Woodberry was able to take a 13-0 lead with just over four minutes until the break when quarterback Lindell Stone punched in a 6-yard rushing touchdown with a big push from his offensive line.

Episcopal got a 54-yard rushing touchdown from Jonathan Sutherland in response to take a little momentum going into the half. However that was short lived as Terrell Jana opened up the third quarter with a 95-yard kickoff return for a touchdown to make it 20-7.

“We felt like they were so aggressive and so fast on the kickoff (coverage) that they almost blow by it and we saw there were a couple of opportunities where they almost gave up big returns,” Alexander said. “Jack Curtis laid the block that got Jana free and that gave us the great start. At that point you just knew we were going to be alright.”

And from there the offense took over. An 11-yard TD pass from Stone to Jana made it 26-7 on the opening play of the fourth quarter. And with three minutes left on the clock, Stone capped one last drive with a shimmy and shake on a 5-yard rushing touchdown to make it 34-7 and put the game out of reach.

Having Stephenson and fellow linebacker Korey Smith back from injury was a huge help too. And with a defensive line that was dominant all year, the front seven kept Agwunobi and running back Perris Jones quiet on the ground all day. With the way the practice went all week, that was no surprise to the defense.

The win put a bow on Alexander’s tenure and the Class of 2017’s impressive run. In 2014, the Tigers were undefeated heading into their meeting with Episcopal. Stone was forced to watch that game from the sidelines after he broke his collarbone weeks prior. The Maroon upset the Tigers and spoiled that potentially perfect season. This time around, Stone and company spoiled that for the Maroon after a tie in last year’s game. The win Saturday allowed Alexander’s staff to improve to 8-3-1 against their sworn rival.

“We were really excited that they were undefeated because we know that that is such a burden to undertake in this game,” Alexander said. “You’re playing two games then, chasing a perfect season and trying to win this one. And we wanted to be the only team to beat them and so we’re grateful that we are.”

Woodberry finishes the year with a 9-1 record to go with their fourth consecutive Prep League championship it earned the week prior. And with this massive senior class departing along with Alexander, an amazing era for the Tigers comes to an end and new chapter begins, for the now former coach, a vaunted senior class and of course, Woodberry’s football program.

“It’s been a great run and we are excited to find somebody that wants us,” Alexander said. “What a group to go out with.”