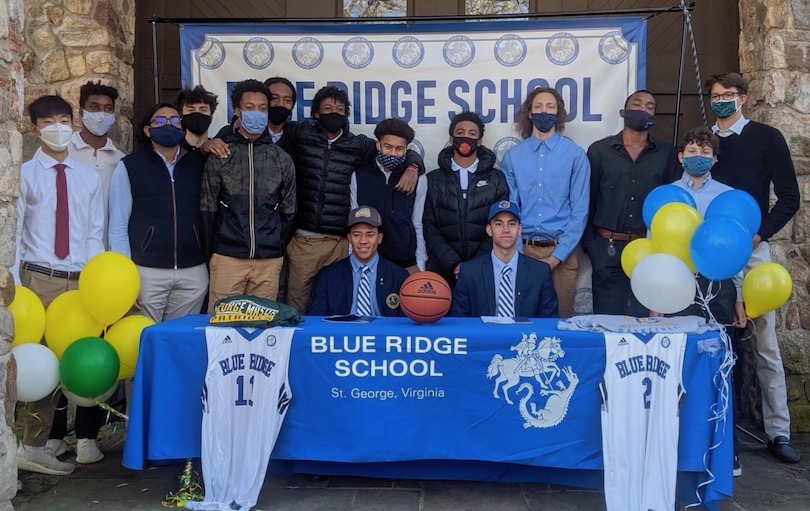 Most of us read in a high school English class what happened when Robert Frost’s narrator came to a fork in the road in the woods — he took the one less traveled by and it made all the difference.

“When we’re here at Blue Ridge it’s just us — we’re all with each other all the time and that just makes it so special,” said Blue Ridge guard Kobe Jerome. “There’s nowhere else for us to go, we’re in the gym or always together as a team.”

Jerome and teammate Michael Gray’s two very different paths converged in the woods at Blue Ridge and for both, the choice has made all the difference. They finalized their college plans together Monday outside the Blue Ridge library together, with Gray signing with George Mason and Jerome signing with the University of California-Riverside. The ceremony confirmed what everyone knew already was a rarity — two guards signing Division I scholarships playing for the same high school team.

“It shows the hard work we put in in practices because we go at each other and push each other to be the best players we can be and the best people we can be,” Gray said. “Everyone around us is helping make us the people we are and having them at the signing just shows iron sharpens iron.”

How one of the state’s best backcourt tandems got to that point though couldn’t have been much different. Gray burst onto the state scene as a freshman at James Monroe capable of pouring it in and came to Blue Ridge seeking a chance to sharpen his skills, develop and square off against the competition that the Barons’ national level schedule provides. He’s gotten all that and more, emerging as the VISAA Division 2 state player of the year as a junior last season while helping lead the Barons to a state title and a 30-win campaign. Gray averaged 14.3 points, 4.8 boards and 3.7 assists per game during the run. That helped open the door at George Mason.

“Coach (Dave) Paulsen and his staff were really super genuine, they told me everything that I could get, I’d have to work for it and I liked that,” Gray said. “I just felt it was the best place for me these next four years.”

Things weren’t as straightforward for Jerome. Coming into his freshman year of high school, he had a double hip surgery, a similar procedure to the one his brother, current Phoenix Suns guard and UVa star Ty Jerome endured as a high school senior. That left Kobe Jerome sidelined the summer after eight grade missing basketball and unsure if he was going to be able to play.

“I was kind of not super confident heading into my high school career and my freshman year I played on the freshman team, didn’t play varsity,” Jerome said.

As a sophomore, he transferred to a school that won the New Jersey state championship, but he struggled to get on the floor and play there as part of a loaded roster. So he came to Blue Ridge halfway through his prep career without any high school tape to speak of and because of that, little recruiting interest. It had gotten late in Jerome’s prep career quick.

Undeterred by another loaded roster at Blue Ridge, Jerome quickly found his footing in St. George, earning a nod as team captain and a role for a team that had four guards who would be the star for essentially any high school team they played for in Gray, Will Lee, Derrick Jones and Jerome.

“I can go down the list, but that would just take forever,” Jerome said. “But every one of our players last year was super talented.”

Jerome took advantage of every minute he got, averaging 3.7 assists per game during the state title run and allowed essentially no drop off if he was running the show and Gray wasn’t or if he was at the point and Gray was off the ball. That helped create the opportunity at UC-Riverside and with the help of technology like a virtual tour since Jerome hasn’t gotten a chance to visit due to the COVID-19 outbreak, a commitment.

“Today was incredibly special — my decision to come to Blue Ridge made all that possible,” Jerome said. “The film that I was able to get throughout quarantine when recruiting kind of stopped was just really great and that’s due to this group, my teammates and coach (Cade) Lemcke.”

Where Jerome and Gray’s paths converged mattered too. Blue Ridge’s continued ascent as a state and now national basketball power gave Jerome and Gray what they needed, whether it was the chance to prove themselves against tougher competition for Gray or a fresh start for Jerome. But it also gave them a dose of perspective that made both appreciate the opportunity they committed to formally Monday. They’ve watched incredibly talented and capable players like Sardaar Calhoun at Florida State and their teammates last year in Lee and Sasha Glushkov or in the past Josh Colon have to take less direct paths to get where they wanted to go.

“You can see from Sardaar, he had offers and he didn’t want to take those, he thought he was better than those offers, but you can see now he’s at Florida State and he’s where he wants to be,” Gray said. “(Blue Ridge) shows your route doesn’t have to be the same as everyone else. You can’t take it for granted because it’s not an opportunity everyone gets, every day I’m thankful for being able to be in this position.”

And those players come back to Blue Ridge, they return home to interact and mentor and teach, a brotherhood driven by a love of basketball and forged in the woods.

“They show us how college players actually play and give us that look into how the next level is going to be,” Gray said. “It’s just a boost and having that wisdom that using whatever knowledge they give us, little tools we can use to put in our games to make us be that much better. I think that brotherhood just makes this place that much better.”

Gray and Jerome will be a big part of the next chapter in the brotherhood, joining everyone from Aamir Simms and Mamadi Diakite to Darius McGhee and Malik Johnson who’ve helped take Blue Ridge basketball to new heights in recent years.

At least at Blue Ridge, that’s what happens when paths converge in the woods. Opportunity knocks and doors open.

It was just about the ideal way to start off a new era in Fork Union prep basketball history... 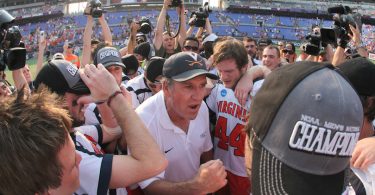 Blue Ridge has a new head lacrosse coach, and as far as splashy hires go at the high school level...