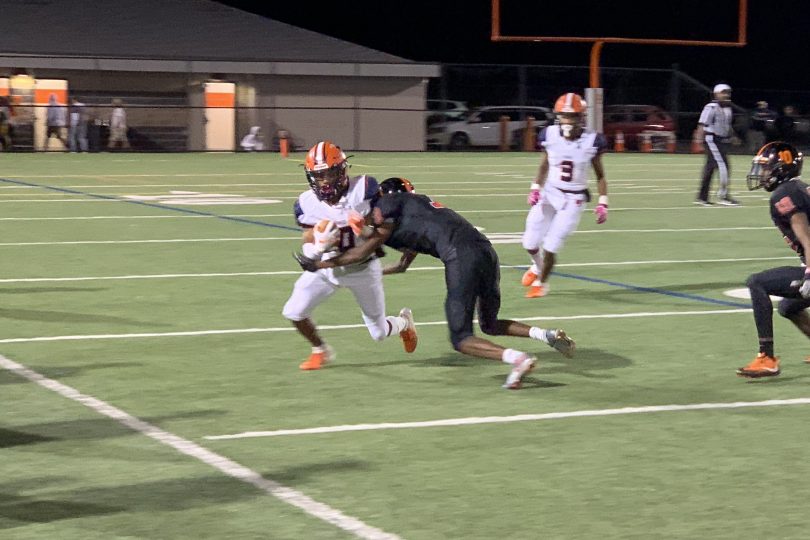 With its next four opponents having a combined six wins coming into Friday, Orange County went into its road meeting with Charlottesville with an opportunity to try and kickoff a strong finish to its season, perhaps even try and carve out the beginnings of a Region 4B playoff resume. Behind a physical rushing attack, the Hornets handled the business they needed to and picked up the much needed win, 41-14, in a game that they never trailed.

“Anytime we can get a win, I’m proud and happy for these kids,” said Orange coach Jesse Lohr. “We’ve played such a tough schedule early on and so I’m really happy about the resilience so many of our guys have shown, just never quitting. Tonight we came out and executed our game play, came out and ran the ball hard.”

The Hornets did not waste much time getting on the board. After a defensive stop to start the game, Orange’s offense cashed in on a short field and Jaylen Alexander picked up the first of his three rushing touchdowns with a 7-yard run with 7:21 to go in the first.

“I was trying to find the best holes that the offensive line was creating all night,” Alexander said. “We just have to keep going and use this (win) to build off of.”

From there, both teams traded turnovers. After another stop from the Hornets on defense, the visitors leaned on Alexander to march down field and a 3-yard touchdown surge put the Hornets up 14-0 early in the second quarter. Then just three minutes later Chance Williams was able to come up with a scoop and score fumble recovery from 60 yards out to make it 21-0.

“To come here and be prepared with a triple option attack with just three days of practice is tough,” Lohr said. “I thought we did a good job at the point of attack and being disciplined on the pitch. I was excited for this defense, the guys playing really well most of the game.”

The Black Knights had their woes offensively between turnovers and then also lining up against a Hornets front seven that was substantially larger, but with 4:24 left until the break Latarius Jackson was able to find a hole and showcase his speed with a 71-yard sprint into the endzone to make it a 21-7 contest.

“Having Latarius back was great to see,” said Charlottesville coach Eric Sherry. “We missed him for a couple of games there and he came out and made a big play there and showed some real speed.”

Orange grabbed back some separation with another rush heavy drive but capping it off this time with a 5-yard touchdown pass from Walker Johnson to Jireek Washington on a crossing route. That gave the Hornets a 28-7 lead going into the break.

From there things were relatively calm until the Charlottesville defense came up with a huge play to make the game interesting. On a screen pass thrown laterally that initially looked incomplete, the Black Knights’ Jamez Lynch picked up the loose ball and housed it 75 yards for a touchdown to make it a two possession game with 2:14 left in the third.

“That was a heady play by Jamez, something you love to see because he’s applying coaching there,” Sherry said.

However, Orange answered right back with Alexander breaking off a 40-yard touchdown run to put his team up 35-14. Both defenses settled from there and the Hornets were able to put a bow on the win with a 4-yard touchdown run from Carey to wrap up the scoring late in the fourth at 41-14.

“We had some opportunities to make that a better game but we just can’t get out of our own way at times,” Sherry said. “A lot of that is about a lot of kids playing new positions and the learning curve is steep.”

On the night, Alexander led all rushers with his 226 yards on 21 carries. Paul Poirer quietly put together a 118 yard performance on just eight attempts. Carey finished with 79 yards on his 11 touches.

“He’s such a good runner and I’m excited that we won’t have to see him again as he’ll be moving on and continuing his football career in college next year,” Sherry said. “He had his way with us tonight.”

For Charlottesville, Jackson led the way with 91 yards rushing on just three attempts. Isaiah Washington had seven carries for 49 yards while Jaleom Adams-Mallory had 44 yards on 11 carries.

Orange (2-5) has won two of its last three games and will look to inch closer to .500 with a home contest with Monticello (1-6) before heading into a bye week. Charlottesville (0-7) will look to pick up its first win of the season next week with a road trip at Western Albemarle (2-4).