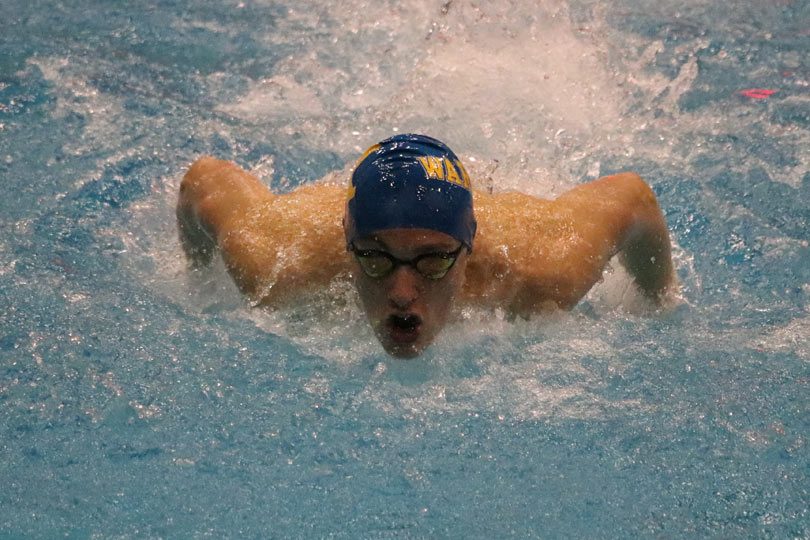 While the dust hasn’t completely settled on the Ben Hair Swim and Dive meet with the Dive portion of the event Wednesday at Woodberry Forest, one thing is certain — Western Albemarle’s boys swim team is deep, talented and isn’t taking anything for granted.

“It’s hard not to swim well with these people behind you,” said Western’s Tyce Winter. “We’re told to attack every race. There’s no easing back on the first 50, you go in with the mentality that you’re going to win it for your team.”

The Warriors rolled to a 412 to 350 win over Albemarle in the swim portion of the Ben Hair meet, including a sweep of the relay event championships capped by an energetic, narrow win over new addition to the meet Monacan by just .13 seconds. Noah Hargrove anchored that race with Winter, Zach Bowen and Stephane Karp rounding out the win.

“Our coach (Dan Bledsoe) has created an atmosphere on this team where, for example, I wasn’t feeling the best today and it’s easy to fall into a hole but you can’t do this on that team, they’ll pick you up and push you forward,” Hargrove said. “With an atmosphere like that, the option for failure just isn’t there.”

Winter yelled and cheered poolside after swimming the opening leg, and watching Hargrove fight to close it out and hold off Monacan summed up the importance of the event and swimming for Western to Winter.

“There are so many swimmers on here that can swim so many events so well,” Winter said. “This meet is homecoming, prom and football games all rolled into one. All of our friends are here and everybody we could possibly know is here swimming. I love seeing my teammates swim well and seeing Noah swim that last leg on that 4×100 is just so energizing. Before that I was so tired, I’ve got homework to do when I get home but nothing got me more excited than seeing all my teammates swim that race.”

Monacan rounded out the top three at the meet with a third-place finish with 239 points while Woodberry took fourth, STAB took fifth and Fluvanna took sixth. Fork Union clocked in at seventh and Charlottesville placed eighth.

The Warriors’ top-end tandem of Hargrove and August Lamb put together monster performances as expected for the Warriors, with Hargrove winning the 200 IM and 100 freestyle while swimming the opening leg in the 200-medley relay win in addition to that 400 free anchor performance. Lamb won the 200 free from a slow heat since he didn’t have a qualifying time, won the 100-fly by edging out Monacan’s runner-up Ryan Pollino by half a second and logged legs on the 200 medley relay and 200-free relay championship teams.

Albemarle put together a strong charge to take the runner-up spot left by runner-up finishes in the 200-medley and 200-free relay events and a third in the 400-free relay to close the meet.

Walker Davis set the pace with wins in the 50-free and 100-backstroke while Charlie Cross took the victory in the 100-breast and paired with a fourth in the 200 IM. Victor Valovalo took second in the 100-free and 50-free while Jake Hartogensis scored big with a third in the 500-free followed closely by Ryan Katstra in fourth place in the distance event.

“I don’t know anybody who didn’t get a best time,” said Albemarle coach J.J. Bean. “I was really proud of them.”

Woodberry’s boys scored a lot of points to take fourth, placing third in the 200 medley and 200 free relays as well as fourth in the 400-free relay.

STAB’s fourth place performance got a Vijay Chhabra took third in the 100 breast swimming from an early heat without a qualifying time and grabbed eighth in the 50-free. Zach Ashby took second in the 200 IM and second in the 100-back for the Saints. STAB took fifth in the 200 medley relay.

For Fork Union, John Hughes was sixth in the 500-free while the Blue Devils’ 200-free and 400-free relays both took seventh place.