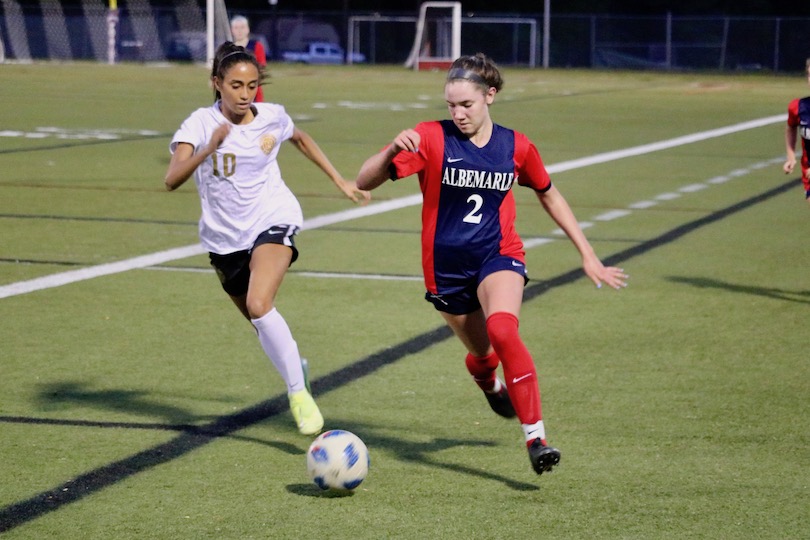 Albemarle girls soccer may have had a number of new faces playing huge roles, but the Patriots brought their trademark aggressiveness to table Thursday night.

The reigning Class 5 state champions created chance after chance against Monticello and cashed in on four of them to pick up a 4-0 victory over the Mustangs.

A pair of those goals came after drawing penalties in the box, with Emily Ward and Katie Manley cashing in on those two chances, with Ward scoring in the first half while Manley notched hers in the second half. Outside those two penalty kicks, Kora Jillions and Devon Higginbottom scored in the run of play, with Higginbottom’s goal in the second half coming off a Manley assists while Jillions’ setup came from Natalie Wolfe. Albemarle did a strong job of controlling possession particularly in the second half.

“That feels great because Monticello is a really good team so just being able to do that, it’s a big win for us,” Ward said. “We’ll be able to take the things we did today and improve on them, we have some good takeaways.”

Higginbottom and Madeline St. Amand drive some of the Patriots’ aggressive approach, giving them the sped to push the ball into the zone and put pressure on the opposing defense as Monticello found out Thursday. St. Amand is a known-entity, a first team All-Region pick on the state title team in 2019. Higginbottom’s fearlessness and ability to take advantage of the slightest opening gives the Patriots an added element though, and the freshman has already made a mark, scoring in both of Albemarle’s wins this week.

Those efforts up top and some technical play in the midfield kept most of the pressure off of keeper Jaya Daniel and the rest of the Albemarle defense, but that group was up to the task whenever they were tested by the Mustangs on counter attacks.

Just getting the chance to play has been special for the reigning state champions after losing a year like every other spring sports team to the pandemic. Albemarle seems to be cherishing the opportunity even while still trying to connect everything on the offensive end.

“It’s so cool to be back, a little surreal to have that opportunity but you go from the ultimate winning to getting it taken away, that you don’t want to take anything for granted anymore,” Sherrill said. “It’s moment by moment and opportunity by opportunity for us.”

Monticello got a strong performance in net from sophomore Lilly Simpson, who held her own in large part against a relentless Albemarle attack. They also got some excellent defensive play from their forwards in the early going.

“We’ve been talking about how the forwards are our first defenders and our forwards were putting in work on defense,” said Monticello coach Thomas Warren. “You could see it in the first 10 minutes and of course Amy is a great coach so they made adjustments, but I’m just proud of the effort and sense of duty from the team.”

The Mustangs graduated 15 seniors over the last two years and have just four seniors on the roster this year, so they’re particularly young. Some teams would view taking that young roster out against a pair of defending state champions like Monticello did this week — they played Western earlier this week — as problematic, but the Mustangs are taking a different approach.

“This is the best schedule we could have — for them this is about benchmarks and growth and right away you’re going to take your biggest test,” Warren said. “We see right away the level we can play against the absolute best and we have a stretch now where we’re going to go out against not defending state champions and then we’ll see them again in the middle, that’s really great for us.”

Monticello will host Louisa County Monday while Albemarle will look to move to 3-0 Thursday at Charlottesville.

After the first five minutes of the game, it appeared that the cross-town girls’ soccer rivalry...