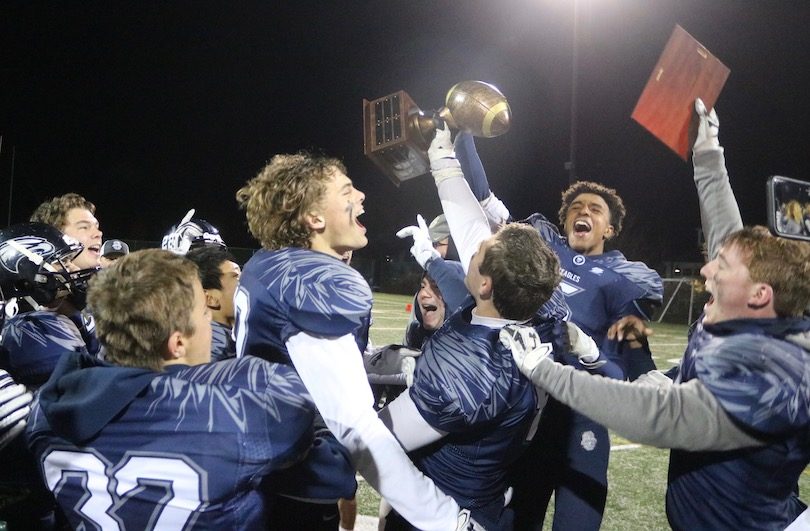 Jonas Sanker has done some wild things as Covenant’s most dynamic player the past few seasons. But he saved one of his finest performances for the VISFL championship game Saturday night.

“He played well — I just expect it from him now and he stepped up,” said Covenant senior captain Jack Meaney.

Sanker accounted for eight touchdowns including the first half of a back-to-back pair of scoop and scores that broke open what had been a see-saw battle with St. Anne’s-Belfield en route to a 64-44 victory for the Eagles.

The back-to-back scoop and scores by Sanker from 61 yards out and then his brother Nic Sanker from 48 yards out in the third quarter transformed a 14-point lead by the Eagles into a 30-point advantage in just two minutes and six seconds. Those touchdowns were the culmination of a concerted effort by the Eagles to try and punch the ball out on a cold night and STAB being plagued by a fumble bug from the opening drive.

“We knew that with the cold weather it was going to be easier to get turnovers and we saw the ball, knew we had to take the opportunity and that’s what we did,” Meaney said. “We wanted to really dominate the line of scrimmage.”

Meaney punched out one of those fumbles, and Sanker pointed to the role players’ efforts and specifically Meaney as the key reason Covenant finished off its second-straight unbeaten season in the VISFL.

Sanker’s eight touchdowns came on the fumble recovery, two touchdown passes to his brother Nic Sanker in the first half and five rushing touchdowns that were part of a 295-yard night on the ground and a 217-yard, interception-free effort through the air. It also marked the final time the Sanker brothers would take the field together in high school with Nic graduating and Jonas just a junior.

“They are the reason why this program is the way that it is,” said Covenant coach Seth Wilson. “Words won’t ever do it justice. These will be the kids when I’m 60 years old and still coaching, it’ll be like ‘if you could be like Nic Sanker and Jonas Sanker and these type guys.”

Nic Sanker was a terror on defense throughout the game and caught four passes for 121 yards. Michael Asher tossed in six catches for 88 yards.

It wasn’t a cakewalk by any means for the Eagles though. STAB’s slew of fumbles ended up being the difference maker, but a ball control offense had the Saints in the driver’s seat early.

“Tonight was one of those nights where we put the ball on the ground too many times when you turn it over that many times it’s going to hurt you,” said STAB coach John Blake. “But we brought it tonight. I think our seniors really brought us into this, getting Nick out this year was awesome, but Chase (Holden) got banged up a couple of weeks ago and couldn’t play tonight. But all of them, John Mark Wegner, Mason Meulenberg and Joe Ambrosi, they led us in here.”

Nick Reese started at quarterback where he and Nolan Bruton have split time much of the year and the offense had some solid rhythm, with Amani Woods, Gabe Decker and Joe Ambrosi pounding away at the Covenant defense. Woods finished with 188 yards on the ground. The Saints also got an early kick return for a touchdown by Reese that put STAB up 14-8 early.

“It was just one of those nights where it wasn’t ours and (Covenant is) good and they’ve got a lot of seniors,” Blake said.

The Saints trailed just 28-22 at the break, and Nick Musi made a monster play with a forced fumble on the second play of the first half, giving STAB the ball and a short field. But an interception two plays later set the stage for covenant to start pulling away as Jonas Sanker ripped off a 47-yard touchdown run that extend the Covenant lead to 36-22.

Beyond Sanker and the opportunistic defense, Covenant got some solid running from Cole Finley who had 130 yards on 13 carries and helped milk the clock late in the game by staying inbounds on key runs after big pickups. Jake Hoadley had an interception for the Eagles.

The game ended the high school careers of nine different Covenant seniors, most of whom had a big impact on the game and a huge impact on these last two undefeated seasons.

“This whole group was my scout team defense (as freshmen when Wilson was Covenant’s defensive coordinator) and we just bonded really well there,” Wilson said. “They bought into everything I’ve tried to preach and talk about and they just live it out. They were my first group and there’ll never be another first group.”

Wilson may never have another first group, but this one, for two years, was perfect, which is all anyone can ask for from that first group. Two championships later, that scout team has risen and delivered.