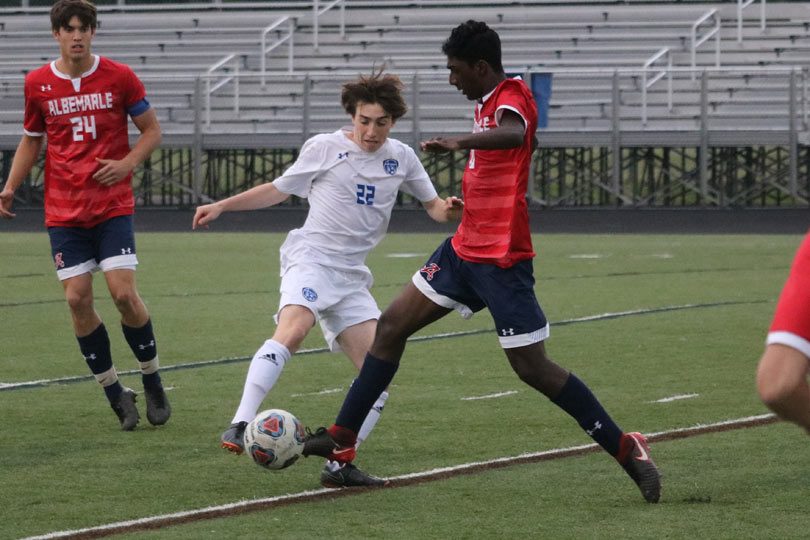 Then, in the final minute of that second overtime, the Warriors found it.

“All game we’d been trying to get something on a counter,” said Western Albemarle’s William “Squid” O’Shea. “Colby (Wren) sent something up to (Joey) Paulson and Paulson sent something back to the middle and I just entered my bag and put that one in the back of the net.”

O’Shea finished and after a brief defensive stand to close out overtime, Western Albemarle picked up its signature win of the year, a 1-0 overtime victory over Albemarle.

While O’Shea’s goal got the job done, it was Western keeper Jack Frey who kept the Warriors alive. Western needed a tie with the Patriots to hold on to critical seeding in the Region 3C tournament, and Frey preserved the shutout time and time again, making physical stops all over the box.

“They say goalies have to be crazy to even play the position,” Frey said. “I’m a little crazy, I don’t care, I’m going to in head first as long as it doesn’t cross my net, lay everything on the line.”

During one particularly wild sequence, Frey collided with Daniel Star and Mohamed Akbar, making a stop near the top of the box where he appeared to touch it with his hands outside the box. A flag went up from a side judge but Albemarle created two shots with Frey still on the ground trying to recover as the center referee called it advantage. Western defenders scrambled and rejected both attempts as Frey got back up and made his way back to the goal.

“Jack makes saves that you can never imagine someone can make, somehow throws his hands up and blocks shots — you shouldn’t have that kind of reaction time,” said Western coach Milo Oakland. “He can stretch, he can catch and when he’s on I think he’s the best keeper Western has ever had and we’ve had a lot of good keepers.”

Frey was the difference-maker for the Warriors, and he faced a barrage of shots as Albemarle created the bulk of the chances while Wester sought out that key counter. The Patriots were also fighting for critical Region 5D seeding, trying to put themselves in position to grab the No. 1 seed with a win.

“We have to give their keeper credit, he made a couple of really nice saves to keep them in it and give them a chance to get their goal,” said Albemarle coach Zach Laird. “I thought we played really well and a couple of bounces just didn’t go our way.”

Albemarle’s own keeper, Tobias Abramenko, did his part to keep the Patriots in it too, making a number of big-time saves of his own including a leaping stop with 2:43 left in regulation that helped preserve the tie.

“He had key saves at timely moments and he’s done that all year when we needed a big save he’s come through,” Laird said.

The game essentially became a goalie battle, the soccer equivalent of a pitcher’s duel, as both teams leaned heavily on the keepers for big plays. Western also got a gritty performance from its defenders against the Patriots’ talented forwards just a week after getting knocked around by Charlottesville.

“That CHS game we got pushed around and really against Fluvanna (Monday) we got pushed around too,” Oakland said. “(Tuesday’s practice) was devoted to playing in the air, set pieces and being tough in the air and it really came down to that today. They’re immensely talented and their strikers, for our defenders to stand up to them it’s all about heart.”

The Warriors’ lackluster performance against the Black Knights loomed large for all the Warriors over the last few days.

“We just lost really bad to CHS and we’ve been talking about defensive positioning and communication in the back and I really took that to heart,” Frey said. “I’m glad the boys showed up well, we played really well (on defense).”

Both squads now turn their attention to their respective region tournaments that will start next week.