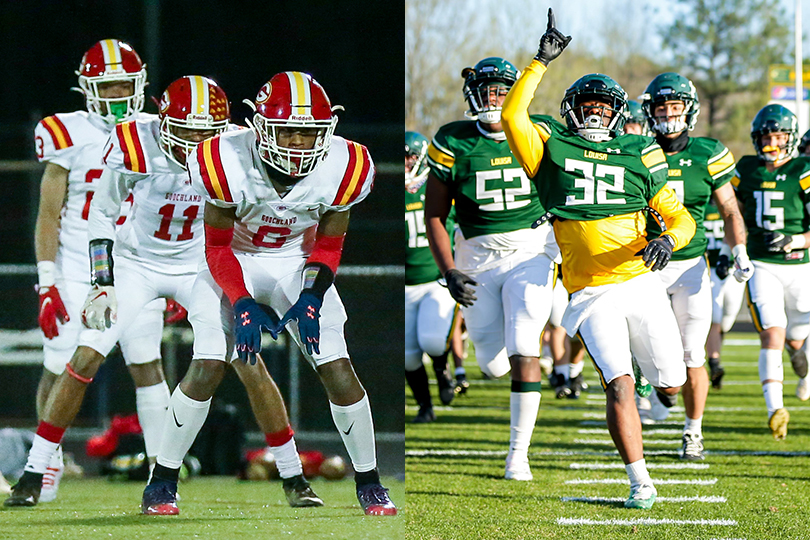 The Basics: Business is about to pick up fast for Louisa County. That’s life when you play in Region 4B, arguably one of the toughest regions in the state regardless of classification during this alignment cycle. Once again, the top four teams in Region 4B are all stout and this time they’re all undefeated, with Monacan and Patrick Henry-Ashland facing off in the other semifinal. The space between this quartet is so razor thin it took a series of tiebreakers just to determine who was going to host this matchup between the Lions and Foxes. There’s some familiarity here as Louisa rolled 49-12 past King George back in the 2019 playoffs’ opening round, a dominant performance after a slow start where the Foxes drew first blood. Louisa has had a few slow starts this year, but they’ve come roaring back every single time behind a defense that’s holding opponents to just 139.3 yards of offense per game. That defense will lock up with an offense that has been explosive lately, scoring 35, 52, 59 and 42 points in their last four outings and they get it done through the air with quarterback Charles Mutter and dynamic wideout Javon Campbell. The question remains though, can they get it done against a Lions’ defense that has been essentially suffocating opponents by wreaking havoc in the backfield with linebackers like A.J. Proffitt cleaning up whatever a fantastic defensive line doesn’t. The answer seems like it would be an aggressive, uptempo passing game to prevent the line from getting home, but Louisa picked off six passes last week against Albemarle, so that doesn’t seem like the strongest move here either. There just aren’t many good answers, though admittedly Louisa hasn’t faced many quarterbacks in the Jefferson District this year with Mutter’s productivity and history, so the challenge may be a unique one.

Key Matchup: King George takes on Louisa’s backfield. While King George’s offense is looking for answers against that Louisa defense, the Foxes’ defense has its own set of problems with Jordan Smith, Landon Wilson and a banged up but still effective Kalep Shelton all three capable of moving the ball on the ground. Shelton is averaging 7.2 yards per carry, Wilson, 7.4 and Smith 8.9 while all toting the rock 43 or more times this year. When Louisa gets that going early in the sequence, ripping off seven yards on first down for instance, it makes them extremely dangerous because that’s when Wilson can be a dual threat and take advantage of a group of quick wideouts who appear due for a breakout game themselves. The Lions are going to look to establish the run behind a big offensive line and that’s been an effective tool all year because of that strong trio of runners. It’ll be up to King George to force Louisa to win a different way.

Who to Watch: Louisa County’s defensive line. It’s nice to have a major strength at any unit, but any coach will tell you that having a top notch offensive or defensive line is one of the most enjoyable luxuries. Qwenton Spellman, Eli Brooks and Lowell Johnson have essentially become household names at this point, but they’re just the tip of the spear up there. Louisa is deep and that defensive line has been much of the difference week-in and week-out. Do they have another strong, stifling performance in them this spring?

The Line: Louisa County by 1. This one has the potential to be a classic and the Lions get the edge here because of that defensive front.

The Basics: There are a few similarities at work here. Both teams are used to playing in the playoffs (Brentsville is in the postseason for the sixth-straight year) and both haven’t played in a couple of weeks due to opponents cancelling or forfeiting. It’s also two accomplished defenses going toe-to-toe, with Brentsville having allowed just 5.8 points per game before Region 3B No. 3 seed Skyline exploded for 44 against them the last time the Tigers took the field. Goochland is surrendering just 8.4 points per game despite playing some explosive offenses like Orange County as part of their vagabond schedule necessitated by most of the James River opting out of the fall sports rotation. A front seven led by linebacker Will Stratton, Anthony Holland, De’Andre Robinson and Jason Woodson is a big reason why that defense is so stout. There’s just not a lot of space to run and if you double team someone up front those linebackers play aggressive and come up and make stops, particularly Stratton who has been in on double digit tackles the last two games. Brentsville could find tough sledding against that group, especially with an offense that’s averaging about 24 points per game but haven’t played an opponent of Goochland’s caliber yet. Still, Guy Hayes, a Frostburg State-bound wideout who plays quarterback mostly for the Tigers, has been working back into the lineup after an early season injury, and Bridgewater-bound Jake Johnson is a tough runner who plays bigger than his size, so Brentsville has some elements that could test the Bulldogs’ defense if Brentsville is clicking. Throwing against Goochland’s secondary can also prove precarious though with a number of ballhawks prowling back there in C.J. Towles, Kam Holman, Andrew Jones and Eyan Pace.

Key Matchup: Brentsville’s defense contends with Goochland quarterback C.J. Towles. Towles has pretty much been whatever the Bulldogs needed him to be on offense this year and that makes him a dangerous, problematic threat for Brentsville because there’s no one thing you can clue in on to slow down the signal-caller who has an offer from UVa where he’d likely play defensive back. He’s a superb athlete but he’s also a gifted passer, having thrown four touchdowns against Central Lunenburg a week ago to four different receivers without throwing a single interception. That might be one of his more underrated qualities too, that he minimizes his mistakes while still taking some risks in the passing game. He’s just awfully good and Brentsville is going to have its work cut out for it trying to find an answer for Towles.

Who to Watch: Goochland’s Connor Popielarz. There’s no doubt that Towles was unbelievable last time out with four touchdown passes against Central, and Brentsville is going to have to account for that. But when Goochland gets in the playoffs, they like to hammer the ball and with a little bit of rain Thursday on that natural surface, this feels like the chance for Popielarz to be featured. The senior running back had 16 touches for 80 yards and three touchdowns against Orange County two games back and he had 79 yards on just eight touches against Central. He’s been the most consistent part of a ground game that as usual has a number of good options and he can catch the ball out of the backfield too. If Popielarz is locked in and giving the offense a rhythm while also putting the ahead of the sticks and in second and short or third and short — manageable situations that create more options — it’ll go a long way toward powering the Bulldogs to a win.

The Line: Goochland by 10. The Bulldogs are solid across the board, and Brentsville, while they’ve proven their toughness, could be in some trouble. 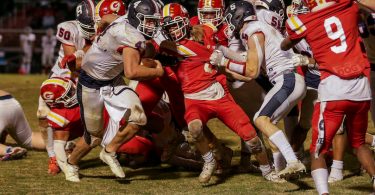