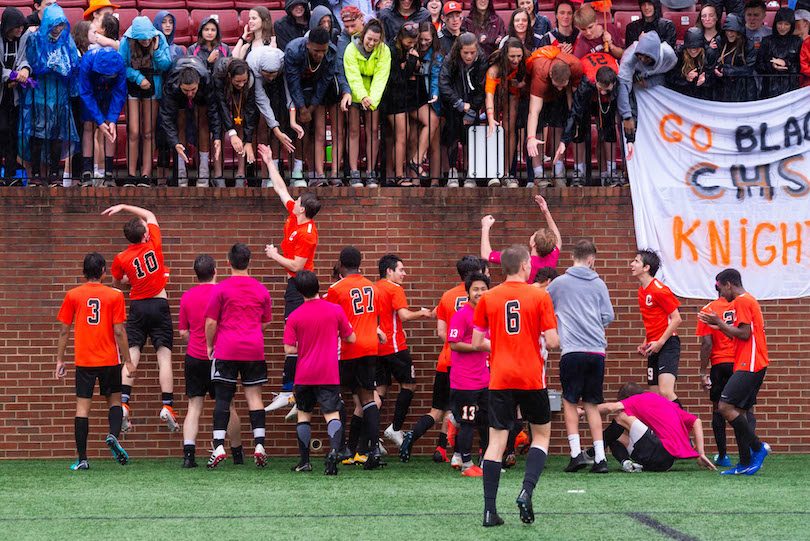 It was probably always going to take this kind of game to end the 12-year, school-wide team sport state title drought for Charlottesville High School.

It was going to take something like a 2-1 come-from-behind thriller in the pouring rain in the Class 4 boys soccer state championship game with an overtime golden goal gamewinner over Chancellor at Roanoke College to bring a state championship back to CHS.

“To do this the way we did, it’s surreal,” said Charlottesville senior Joe von Storch. “It’s been a long time since CHS won a title in any sport and it’s indescribable what we’re able to give to CHS soccer, CHS as a school and the whole community. This is something the community will cherish for a long time.”

Desperately seeking an equalizer to keep hope alive for the program’s first state title since 2004, Benhui Ryang shuttled back across the field with under two minutes to play, rushing to take another corner on the opposite side of the field after Chancellor had neutralized one corner as the rain continued to pour.

Ryang let the corner rip and Chancellor keeper Josh Reid punched it out just a nanosecond before the Black Knights’ captain and leading scorer Kyle Lehnert headed it. The ball shot out toward the top of the box and that’s where it found von Storch on the volley.

“I was waiting out on top of the box and I’d seen a couple pop out during the game and I was pretty much unmarked,” von Storch said. “I was just trying to head it back in for a scrummy goal and it happens to go in.”

Reid played it essentially perfectly from his back, rejecting it with his right hand, right into the back of a Chancellor defender on the ground. It ricocheted back into the net and as it did, von Storch took off, sprinting to the CHS bench and sliding across the turf in front of his team in a wild celebration.

“Since it was less than two minutes left it was a slight freak out, but once it happened I told the team there’s still a long way to go, we’ve got to keep our heads and stay in it,” Lehnert said.

The Black Knights subsequently survived the first two non-Golden Goal overtimes, and that set the stage for more heroics from Ryang. First, Malcolm Brickhouse had the ball and drove past his man toward the corner.

“After playing that long and still have the energy to beat the guy is awesome,” said CHS coach Martin Braun.

Brickhouse chipped the ball back to von Storch who then attempted a cross toward Lehnert. Mike Krieder, who had stymied the Black Knights all game on defense and scored Chancellor’s first half goal that nearly held up as the gamewinner, poked it out to Ryang’s waiting feet. Ryang collected it, connected and tucked it in the back of the net.

“It just felt beyond amazing, when I scored it I didn’t even know it went in,” Hyang said. “I’m just completely ecstatic with our win.”

The goal set off a fierce celebration as the Black Knights surrounded Ryang and then quickly made their way to a vibrant, loud student section that had packed two team fan buses and weathered rain and extensive delays that caused kickoff to move from 11 to nearly 3 p.m.

“When you’re out there in the state tournament two hours from home, pouring down rain the entire time, to see all your friends up there, all your family, it gets you going,” von Storch said. “Five minutes left, I’m gassed, the entire team is gassed but they never stopped.”

The Black Knights also quickly found players who’d just missed their own title in 2017 when the current seniors were sophomores, like Abbi Osman, and were embraced by those former teammates who’d come out in support and helped lay this era’s foundation.

“It’s amazing, for all the guys here that deserved to win it in the years past, bringing it home this time feels amazing,” said captain Ayat Mohamed.

It was an incredible moment for Lehnert and Mohamed, who’d poured themselves into the program, with Lehnert emerging over the last two years as much more than the lockdown defender he’d been before on some incredible teams while Mohamed absorbed the brunt of teams’ attention.

“All the hard work I’ve put in, the great teams we’ve had and we just couldn’t get to the final thing — it’s a great culmination of everything that we’ve done,” Lehnert said.

Both Lehnert and Mohamed are emblematic of a huge senior class that wasn’t interested as much in making 2017’s state final loss right as they were with authoring their own legacy.

“I don’t know of a different group of boys that deserve it more,” said Braun, who was a player on the last CHS boys soccer title team in 2004. “They’ve been working so hard all season and it was looking like it wasn’t going to fall for us but they kept fighting till the final whistle.”

This team’s legacy, this squad’s memory is secure. The Black Knights made history Saturday with a header and an overtime winner that ended droughts as the rains poured.