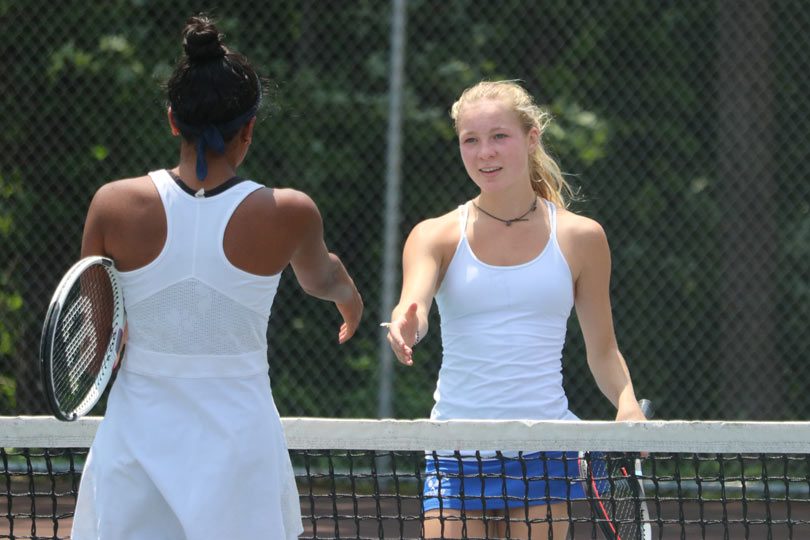 Western Albemarle boys tennis has developed a reputation for quickly disposing of opponents during playoff time.

Saturday, the Warriors’ girls squad gave the boys a run for their money, wrapping up a 5-0 victory over Hidden Valley in an hour and 10 minutes, just 10 minutes behind the boys squad’s own state quarterfinal win earlier in the day.

The win vaults Western’s girls into the state semifinals where they’ll host Abingdon at 1 p.m. Tuesday.

“I think everyone is just so excited for the postseason — we all have really high goals so every single point we focus on trying to win the point,” said Western’s Corinne Jennings. “I think that’s what made it so efficient for us (today).”

“I really like to win those long points, but today I also went for some winners because that’s important too,” Inman said.

Both Inman and Jennings pointed to how hot practice was this week and how sticking it out in that heat helped on Saturday as the temperature climbed during the match that started at 1 p.m.

“In practice it has been really hot this week, but our drive and motivation for the next few matches helped us push through and today our hard work really showed,” Inman said.

Now the Warriors can turn their attention to the state semifinals, the round where they got tripped up a year ago.

“This year we’ve we’ve been doing everything we can to prevent that from happening,” Inman said. “To not sell ourselves short in any practice or match and just really go for it.”