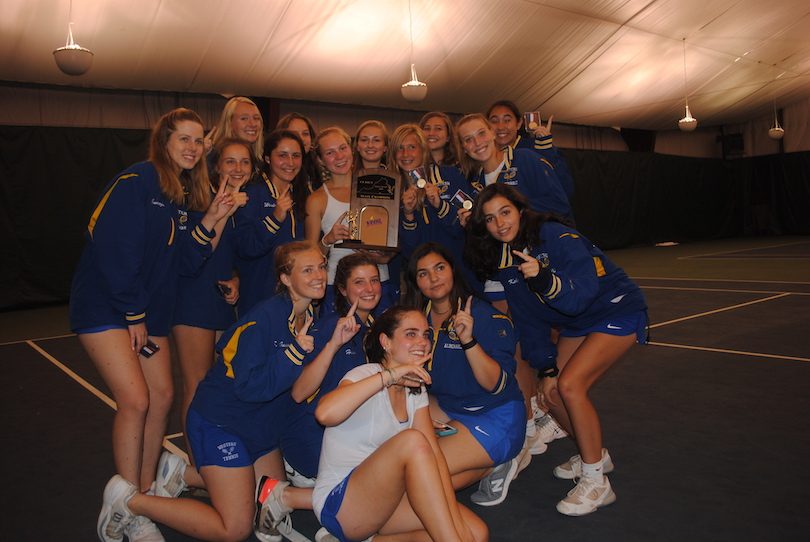 Western Albemarle’s girls tennis team has been on a mission this year. After suffering a brutal defeat in last season’s state semifinals at the hands of Cave Spring, the Warriors have quietly gone about their business, waiting for a chance at redemption.

“This has been amazing, I think everyone worked so hard today, and even though the score was 5-0 all the matches were intense, they were competitive,” Jennings said. “It was just a really good feeling.”

With Western forced due to rain and limited indoor court availability to contest the title match at Hunting Hills Country Club on two courts, Jennings got things started with a 6-0, 6-1 while Austin Winslow won 6-0, 6-1 at No. 2 singles. Stephanie Hass then won a war in her match at No. 3 singles, splitting the first two sets 6-2, 2-6 before roaring back for a 7-5 victory in the decisive set.

Inman, meanwhile, dispatched her opponent at No. 4 singles 6-3, 6-0, continuing a recent run of great play that came on the heels of being forced to retire due to injury in a late regular season match against Albemarle. Inman getting back on track has helped Western maintain a decisive edge to close out the season as they swept all three state tournament matches 5-0.

“It’s so special, every year we thought we had a chance and last year was the most painful shortcoming,” Inman said. “I always knew this team was special and I thought it really showed today on the courts.”

Inman’s win set the stage for Sarah Randolph Warren or Jenny Little to close the door on the Jackets and Warren edged Little to the punch, winning 7-5 in a tough first set before winning 6-0 in the second. Little was up 6-2, 5-4 when her match was suspended and the celebration began for the Warriors.

“It was super exciting because in the first set I was kind of nervous but I got into a groove and started playing really well,” Warren said. “Because there were only two courts, everyone was watching.”

The Warriors completed a 21-1 run with the victory.

Western leaned heavily on Inman and Jennings this year, who learned a lot last year about leadership from Hannah Kearns, who was in attendance for the redemptive victory.

“Hannah was such a good leader last year, she’s been a great role model for us,” Jennings said. “It just shows how close our team is that we always have players who are coming back to support us.”

With key pieces like Winslow, who is just a freshman, back in the mix, the Warriors could be in position for a title defense next June. But for now, the Warriors will enjoy just the second ever girls tennis title and a sweep of the tennis championships with the boys squad.

“We were pretty upset to hear that it was being moved inside to a place that only has two courts but we knew we had to make the most of it,” Inman said. “Having Corinne and Austin come out and have such strong starts for us was really, really nice. It took the nerves away a little bit.”

“We know from last year, from having a painful gift that has been in the back of some of our minds that they really need to be focused when they need it most — so this week,” Markowitz said.

The Warriors were focused, they blocked out the distractions of time and format and venue changes to win a title. To finish their unfinished business. To become champions.