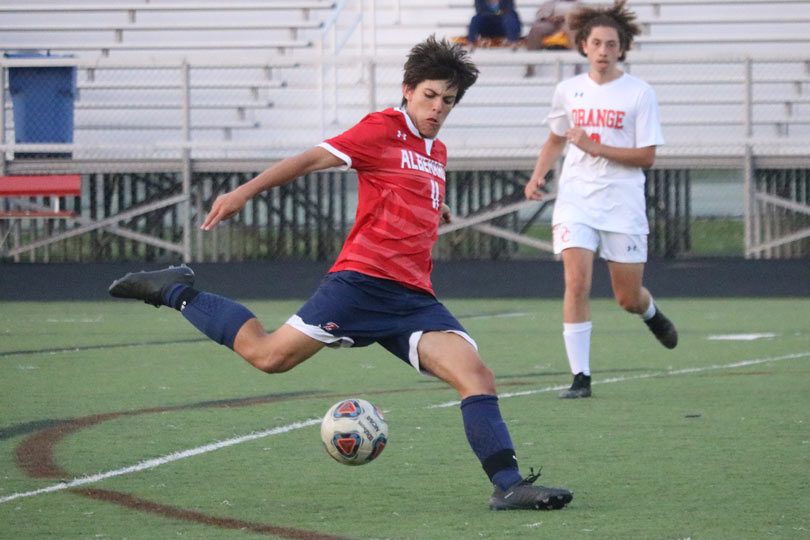 Forced into a Region 5D three-seed after a regular season ending loss to Western Albemarle, Albemarle boys soccer knew it was going to miss out on a bye, but that became a little tougher when they drew a vastly-improved Orange County squad for the third time this year as their first round opponent.

The Patriots had to work for it, but they managed to knock off the Hornets for a third time with a 2-0 victory Wednesday night, advancing to the Region 5D quarterfinals with the victory.

Daniel Starr scored both goals for the Patriots, with assists from Roshan George and Brandon Mahon. Mahon was close to blowing the game open three different times in the second half, including a terrific free kick that banged off the post and a tremendous run with three minutes left that he couldn’t slip past the keeper.

“We had some chances to put some goals in and they just didn’t go our way but luckily we got the two and got out of here with a win,” Laird said. “The result is what counts, we weren’t really happy with how we played tonight but this time of year there’s no time to worry about that you’ve just got to come out and keep playing.”

Orange, on the other hand, took another step forward as a team, challenging the Patriots after falling 7-0 and 8-0 during the regular season to Albemarle. The Hornets defended well throughout and created a series of good chances on counter attacks, with Tobias Abramenko coming up with three saves for Albemarle in net to preserve the shutout.

“We knew it was going to be a tremendous challenge taking on the defending 5A state champs on their own turf,” said Orange County coach Ben Freeman. “We came out with the intention to take it to them and give our best effort of the season. We started really well and had a couple of good looks — had we put one in, it’s hard to say how the rest of the game would’ve played out. But really happy, really proud of our guys, we played tough.”

The Patriots will now head to Harrisonburg where they’ll face the Blue Streaks at 7:30 p.m. Thursday night. A win there would put Albemarle one victory away from a state tournament berth.