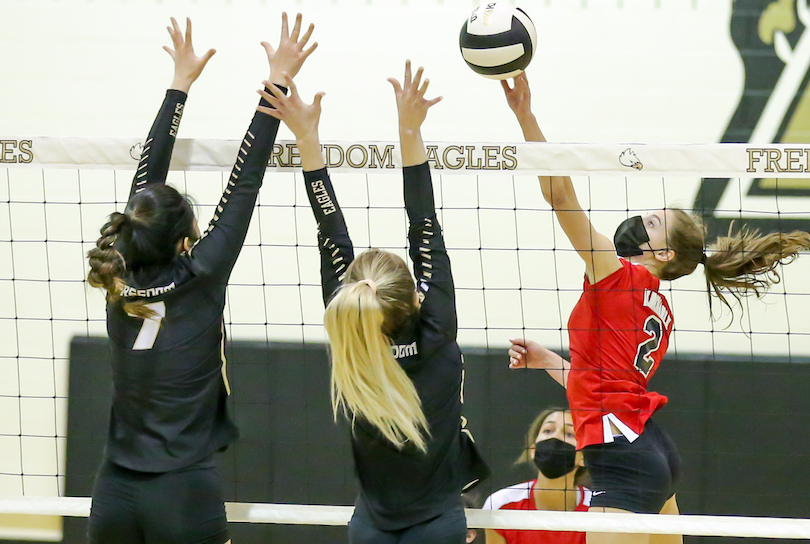 Sometimes, you just run into a team that catches fire at the exact right time, a veritable buzzsaw of an opponent. That’s exactly what happened to Albemarle volleyball Tuesday night in the Class 5 state semifinals as the Patriots fell 3-0 at the hands of the Eagles.

“No doubt today they played better than we did and we didn’t play poorly at all, we stuck our noses right back into that fight,” said Albemarle coach Lance Rogers. “They had more offensive firepower and were doing a good job of using it.”

The Eagles came into the match deadset on advancing to the final, and that determination was apparent from the moment Freedom found out it was going to be taking on Albemarle as the Eagles jumped into research mode. It didn’t take the Eagles long to figure out that they had to figure out how to contain Maya Winterhoff and Sophia Dawson.

“As soon as they found out who we were playing, they went home, started looking up videos and scouted the heck out of them,” said Freedom coach Will Davis. “We came in with a really solid gameplan, we knew (Winterhoff and Dawson) could swing so last night in practice we ran them through more blocking drills than they ever wanted to, we made that a point of emphasis.”

The effort in practice proved worth it. While Winterhoff notched 13 kills and Dawson had 10, they had to work for every single one of them as Freedom was able to essentially cut the tandem’s hitting percentage from the region tournament in half.

Meanwhile, Freedom’s own hitting tandem was going to work, with Haley Adams and Halie Murphy combining to create a relentless attack from the outside for the Eagles. Albemarle couldn’t crack the code to get Freedom out of rhythm.

“We think of them as the dynamic duo and the other team really doesn’t get a break,” Davis said. “If you have one strong hitter and they’re in the back row you think ‘let’s score some points’ but nobody gets that from us.”

Freedom has really gotten going this postseason, unleashing a measure of revenge in the region tournament after a frustrating finish to the regular season where the Eagles games against district foes Riverside and Rock Ridge. In the region tournament, they bounced back and beat both those squads including a region title sweep.

“We had a tough end to our season with two back-to-back losses,” Davis said. “These girls are dedicated, they played inspired and I couldn’t be prouder of them.”

The Eagles closed the door in game three with another relatively comfortable 25-17 victory, with Murphy unleashing three-straight kills to open that set. With that one-two punch of Murphy and Adams, Albemarle’s libero Franceszca Penaredondo had a busy night as the senior finished with 18 digs. Getting those 18 hard-hit balls up was no easy task as Penaredondo threw herself all over the floor.

“I kind of just trusted my gut and trusted my team,” Penaredondo said. “I just read the hitters as best as I could and shook off every mistake that I had.”

“I’m really proud of our team, we really went into this season not expecting much but we worked really hard, we bonded really well,” Penaredondo said. “We played with a lot of heart and grit.”

With a new head coach in Rogers who replaced the state’s all-time winningest volleyball coach and the program’s architect, Albemarle faced an abbreviated season that was shortened even more by a COVID pause. But as Penaredondo pointed out, the Patriots’ bonded deeply in that short time.

“I’m so proud of these seniors, they showed so much leadership — they set the tone of character and work ethic,” Rogers said. “They’re all going to graduate and go on to successful careers but I feel like I’ve got a bond with all of them. Our little motto, You Never Walk Alone? I feel they’ll never walk alone the rest of their lives, they’ll always have that bond.”