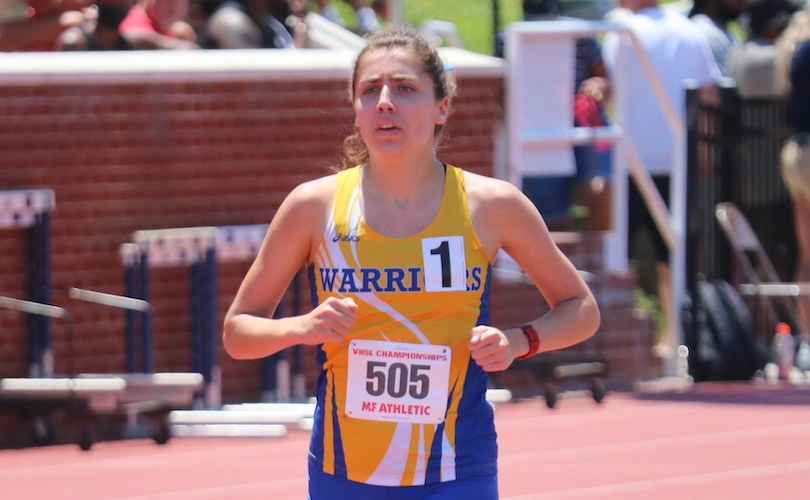 Western Albemarle junior Jenna Stutzman took the same approach in both the 1600-meters and her opening leg of the 4×800.

Both times it paid off in state championships, leading a strong day for female athletes in the Class 3 State Track and Field Championships where Western Albemarle took third, Fluvanna County grabbed eighth and Charlottesville took 12th in the team competition.

The Warriors knew because of race conditions that a good start was even more critical than usual in the relay.

“We were really focused on racing people — it was really a race about racing people and not necessarily the clock,” Stutzman said. “Especially with a waterfall start and a really big heat, so coming off the line was a really important part of getting us out.”

Stutzman’s opening leg that was the fastest in the entire race set the tone and freshman Hailey Hodson followed with a strong leg, senior Maeci Frank handled business too and then sophomore Jordan Stone closed it out with a speedy fourth leg that was just 1.8 seconds off Stutzman’s. It certainly helped Stone to have a significant lead over the field.

“It helped a lot to be able to know that I’ve got it most likely helped me run a lot better,” Stone said.

Stutzman employed a similar approach when she toed the line in the 1600 meter race later in the meet and clocked a 5:18.58

“It was the same kind of idea (as the relay) with a really big heat and a waterfall start,” Stutzman said. “Coach is like, you need to get out and then after that it’s just a matter of setting pace and keeping it going.”

Western also got solid outings from the 4×400 squad that took fourth overall, Cierra Halloran’s third in the pole vault and from Abby Huemme who finished fifth in the 400 meter race to help bolster that third place finish.

Fluvanna’s eighth place finish was fueled by Shea Hart who took second in the 300 hurdles, third in the 100 hurdles and fourth in the high jump. Amy Glowatch also finished fifth in the discus for the Flucos while Fluvanna’s 4×800 team took sixth.

Charlottesville’s 12th place finish was largely due to Jaelyn Lynch taking fifth in the triple jump, seventh in the 100 hurdles and eighth in the 300 hurdles while also running a leg of the Black Knights’ sophomore-laden fourth place 4×100 team.

For William Monroe, Kiana Hatchett took fourth in the triple jump while for Monticello, Makayla Butler finished eighth in the discus.