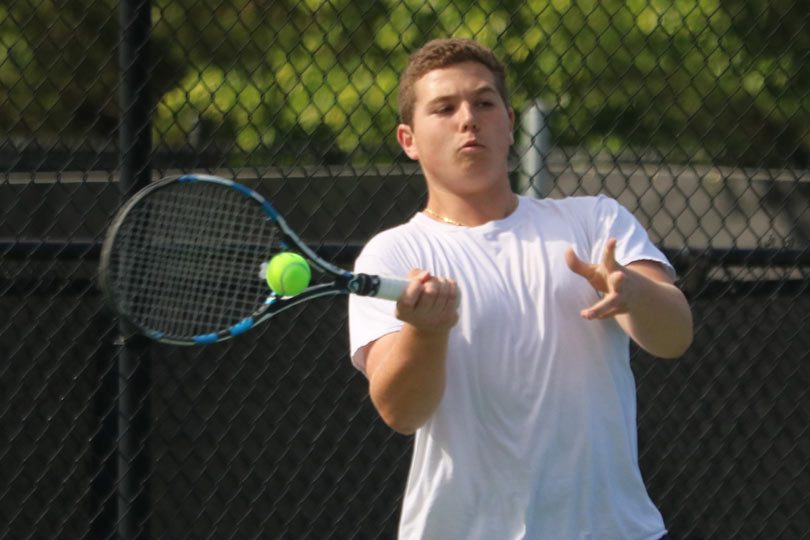 Wisely, Covenant’s boys tennis squad is intent on not assuming anything is exactly how it seems in the state tournament.

“We’re trying to remind the boys that we don’t know who we’re playing,” said Covenant’s No. 1 Andrew Carson. “We might know their ranking and how they’ve done against us other teams — but they could be a completely different team.”

Tuesday against Wakefield in the VISAA D2 state quarterfinals, the Eagles didn’t take anything for granted and made short work of Wakefield, rolling 6-0 to advance to state semifinals.

The Eagles’ No. 2 Alex Vangelopoulos and No. 4 Robert Wood came off the court first with 10-2 and 10-1 wins respectively with Vangelopoulos fighting through a sore back from an injury suffered in the VIC championship last week to pick up the easy win.

“I just tried to take it easy and swing through the ball and hopefully be ready for Friday and Saturday,” Vangelopoulos said.

Carson had little doubt that Vangelopoulos was going to deliver in that spot for the Eagles.

“He’s always been a fighter, he’s a football player,” Carson said. “He comes out every day and works really hard.”

Carson came off next after rolling 10-2 and Brycen Alley picked up a 10-4 victory at No. 4 to push the advantage to 4-0. No. 3 Ben Grant and No. 6 Julio Degeorgis wrapped up at nearly the same time owing to Degeorgis playing on the Boar’s Head indoor courts, out of sight of Grant’s match.

Now the Eagles turn their attention to the state final four where they’ll face No. 3 North Cross, who knocked off No. 6 Hampton Roads Academy 5-3 Tuesday. The Eagles beat North Cross for their third-straight VIC championship 5-1 last week.

“We’ve been here before but I think that this group, we’re really motivated, we all love each other and we’re just ready to go out and fight together,” Vangelopoulos said.