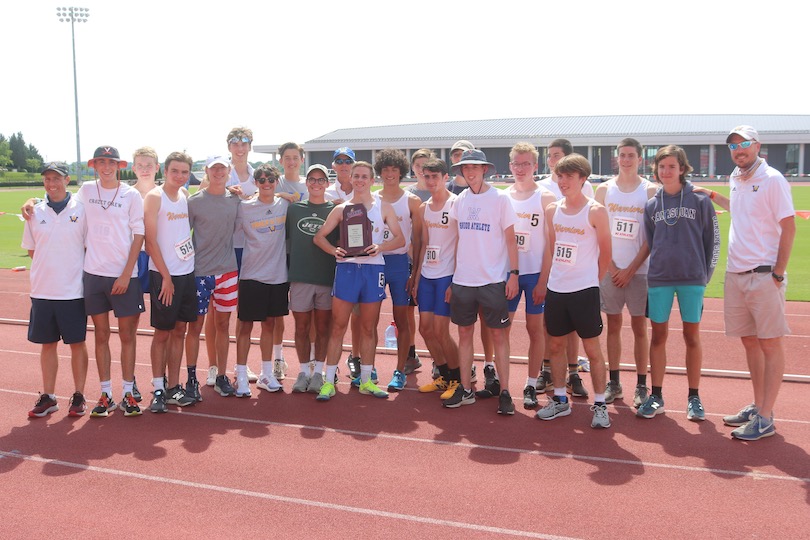 Every single year, Western Albemarle has the distance runners to make an outdoor track and field state title run. But you’ve got to have a little something different to get over that hump.

“It’s really nice to have that hurdle/sprint group — and all of those guys are back so that really makes it good looking ahead to next year,” said Western coach Lindy Bain.

Sullivan was the Warriors’ lone individual state champion, winning the 110-meter hurdles while taking second in 300 hurdles. His efforts sparked Western to an eight-point win in the team title race as Western’s 57-point total edged second place Heritage’s 49 and the Warriors were crowned outdoor state track champions for the first time since Western went back-to-back in 2008 and 2009.

Owen Shifflett got the Warriors started with a runner-up finish early in the morning in the 3200-meter, with Jade Mawn finishing fourth in the race to also score points for the Warriors.

But things really shifted into gear when Sullivan won his title in the 110 hurdles. Sullivan held off a charge from Charlottesville’s Nick Pedersen and his race looked like it all went to plan. The Western junior was a little more critical of his performance.

“I got off to a pretty bad start, the starter was kind of holding us for a long time so I was jumpy,” Sullivan said. “But technique carried me into first.”

Overcoming that slow start was child’s play compared to what Sullivan and the rest of the Warriors have overcome since the last time the 2019 state championship was held and Western finished a few points out of the top spot. Just to get to the outdoor state championships this year, distance runners have had to work to peak three times in six months while other competitors have had to overcome restrictions on training and shortened seasons that left little room for error and a revamped qualifying process that only advanced the top four runners out of every region rather than qualifying cuts allowing competitors to advance as they had in the past.

Western stacked up several significant state runner-up finishes outside of Sullivan’s title, with Jonathan Kumer taking second in the 800 meters, Shifflett grabbing the runner-up slot in the early morning 3200 meters and Western’s 4×800 team taking second near midday. Shifflett also took fourth in the 1600

The Warriors also got the fourth place from Mawn in the 3200 and Trevor Donalson took fifth in the pole vault while Ben Nitzsche was eighth in the 110 hurdles behind Sullivan.

Sullivan had to shake off a significantly delayed start in the 300 hurdles caused by the misplacement of the hurdles for the event at the wrong spots on the track. That forced the competitors to wait, eventually get cooled down and made an already brutal race that much more challenging. Sullivan overcame the circumstances to battle his way to a second place finish after colliding with a hurdle.

“I hit one coming out of the curve and if it was in the wrong place, that’s on me for hitting it, we practice to go over them anyway if it’s right or wrong,” Sullivan said.

Western had also luckily already clinched the team title ahead of the 4×400 because the Warriors were disqualified for a handoff outside the zone on the first exchange, capping an unusual year with an unusual finish to a state championship performance.

“It’s a great group of guys so it’s really nice for them to pull it off today — not the best of days,” Bain said. “It just happens to be sports, it goes that way sometimes. Luckily we did what we needed to do.”