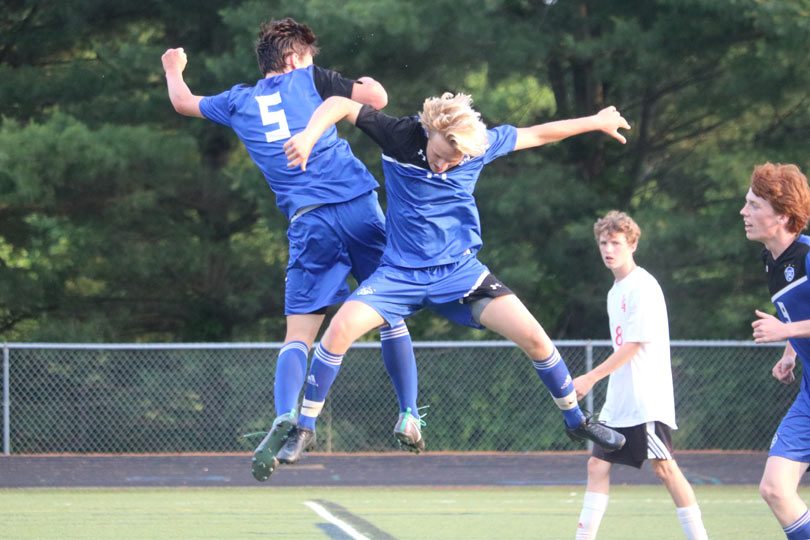 In what’s become a recurring postseason theme, the Warriors’ attack exploded in an early flurry and the defense controlled visiting Lord Botetourt from start to finish in a 7-3 victory in the Class 3 state quarterfinals Tuesday evening in Crozet.

With the win, Western makes a return trip to the state semifinals where their season ended last year.

Carter Spilman, who had a hat trick, buried a penalty kick in the fifth minute, while Gabe Nafziger scored off a corner in the eighth to give Western an early 2-0 lead.

“It’s huge — it’s our biggest win of the season. Each one gets bigger and bigger as the stage gets brighter and brighter,” Nafziger said. “We were here last year and we know what we have to do.”

Barely 30 seconds had gone off the clock after Nafziger’s first goal when he was celebrating another.

The Warriors’ only hiccup of the half came in the 19th minute when they conceded an own goal on what seemed like a simple pass back to goaltender Jack Frey. But Spilman registered his second in the 35th minute and Western went into the break with a 4-1 lead.

“It’s become a very fortunate pattern for us recently,” Western head coach Milo Oakland said. “You don’t attribute it to anything different — there’s a lot of hard work, but there’s also some luck involved.”

Spilman didn’t take long to complete his hat trick, beating Cavaliers goalkeeper Collin Ewers on his first touch of the half to stretch it to 5-1. The Warriors kept Ewers busy all evening, firing 20 shots at the net, while Ewers made several spectacular sliding and diving saves. He registered 11 in all.

Despite the wide margin for the Warriors, perhaps the play of the game came in the 43rd minute when Botetourt’s Coleman Osborne floated a free kick from about 50 yards out perfectly over the outstretched arm of backup goalie Nathan Beck to cut the lead to 5-2.

“Certainly we spend a lot of time practicing defending set pieces,” Oakland said. “It’s an area we’ll keep working to improve, but we’re happy to be able to move on.”

But it did little to wake up the Cavaliers offense, while Western’s kept humming. Joey Paulson and Ray Crowder got into the scoring act with goals in the 52nd and 73rd minutes, respectively.

Lord Botetourt finally got a goal during the run of play in the 77th minute when Gardner Branscom beat Beck off a set piece.

With just four seniors on the roster, the Warriors will meet Manassas Park in the state semifinals as they look to get over the hump.

“We’re a year wiser but we still have a lot of young players,” Spilman said. “There’s nothing guaranteed so we’ll play extra hard. Every game could be the last, so we have to keep that mentality.”