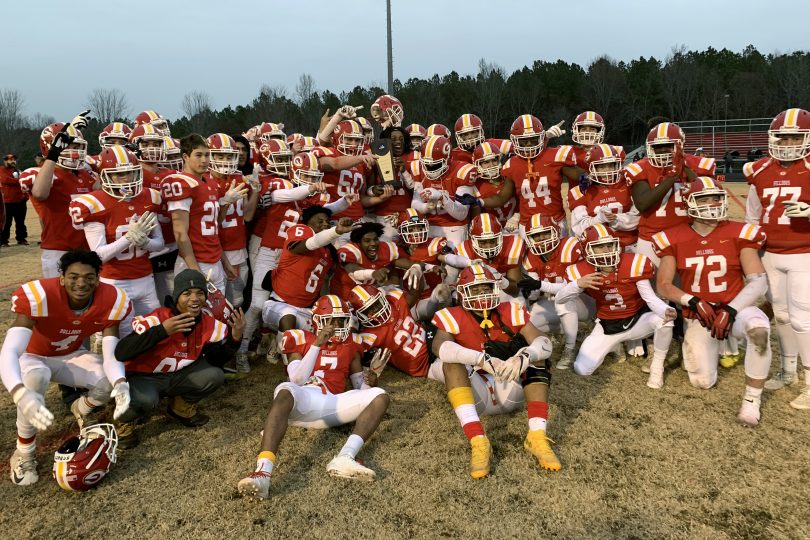 A three score lead can be tricky. Goochland never trailed on Saturday hosting James Monroe in the Region 3B championship. Nonetheless, until the Bulldogs forced one final turnover on downs in the fourth quarter, there was no relief on the sidelines. A lot of things happened to Goochland on Saturday — the most noteworthy of which was the seven turnovers it forced on defense — but in the 20-7 victory over the Yellow Jackets, the Bulldogs sent a clear message to anyone that doubted their ability to make a deep playoff run at the Class 3A level.

Goochland makes final fours no matter the playoff alignment, especially when they have the ball all game. Some things just don’t change.

“At this level, it’s all about the ball,” said Bulldogs coach Alex Fruth. “The defense just went out their and kept getting us the ball back, I mean repeatedly. It’s so hard to score when you go out there and take the ball away like that.”

Goochland made a statement on the game’s opening drive by going on a nearly seven minute march that featured a pair of fourth down conversions including a 6-yard touchdown pass from quarterback CJ Towles to receiver NyJavian Timberlake to make it 6-0.

“We just wanted the playmakers to get the ball in space so we could get positive yardage,” Towles said. “All week we practiced the basics and really selling our play fakes. We came out and made that work.”

The Bulldogs then forced the first of what would be seven turnovers. That set up another scoring drive with Towles hitting Devin McCray with a 12-yard touchdown strike to make it 13-0 with 0:44 left in the first quarter.

“It doesn’t matter what level you’re at — you cannot win with seven turnovers like we had,” said Monroe coach Rich Serbay. “We gave them good field position all game but the other thing was they really hurt us with the counter. They knew we run to the ball well and they threw screens and back passes and attacked us there and it worked. That was a well-coached, well-laid out game plan.”

The Yellow Jackets’ struggles holding on to the ball continued and when Goochland got an interception from Timberlake at midfield. The Bulldogs rushing attack then showed up big with a thundering 31-yard touchdown run from Connor Popielarz to make it 20-0 with 5:51 left in the second.

“We put in so much stuff offensively this year that we haven’t been able to run for whatever the reason, mostly the circumstances,” Fruth said. “To be able to unload everything was a lot of fun. In the second half we just worked on protecting ourselves and making sure we didn’t put ourselves in bad situations. We had to eat clock and protect the football. We punted more than we have all year but it was one of those things where we just did not want to beat ourselves. Control the field and let this defense go out and keep getting that ball because they did it all game.”

The story going forward from there was Monroe continuing to gift Goochland the football but somehow managing to bend and not break on defense to not allow the Bulldogs to deliver another death knell of touchdown. The Yellow Jackets caught a huge break when they forced a fumble in their own endzone that very easily could have been a touchdown but was ruled a touchback instead. However, with Goochland’s defense holding fast and the turnovers piling up, the game sat at 20-0 until late in the fourth.

After a switch at quarterback, the Yellow Jackets were able to get on the board with freshman Tahj Smith passing down the field and then capping his team’s lone scoring drive with a 1-yard touchdown run to cut the deficit to 20-7 with 2:24 to play.

Bulldogs senior lineman Connor Duncan — who was a menace on the field defensively with a pair of sacks and a fumble recovery — came up with the ensuing onside kick. The Yellow Jackets got the ball one more time by burning their timeouts. However on fourth down in the redzone, Bulldogs junior linebacker Will Stratton came up with a breakup to get his team the ball back so that Bulldogs could take a knee and wrap up the win.

On the night the Yellow Jackets had 12 drives on offense. The Bulldogs came up with three interceptions and four fumbles to go along with a pair of turnover on downs and a forced punt. While Duncan and Khalil Holman led the charge up front on the line, McCray led the secondary with a pair of interceptions.

“The defensive line brought so much pressure up front that we were able to force them into making bad decisions,” McCray said. “We had a turnover circuit in practice, on how to create turnovers and it showed out there tonight.”

Goochland (12-1) will advance to face Hopewell in the Class 3A semifinals to played on Saturday. Goochland’s senior class is now 12-3 in their careers in the postseason.

“You could get complacent with some of the wins we’ve had but with this one, that’s not the case, we’ve got great senior leaders,” Fruth said. “We know what we need to fix. We know Hopewell is the real deal and we know have to play great football to be able to win this next game.”