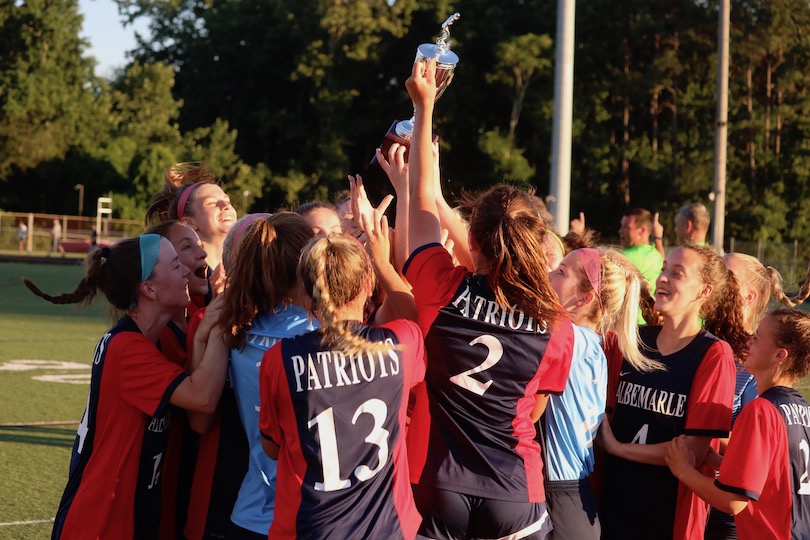 Albemarle girls soccer’s Madeline St. Amand had her defender one-on-one in the open field just outside the box with zero help in sight.

Anyone who’s seen St. Amand play since she started her Albemarle career three years ago knew that was bad news for Mountain View’s defender.

That’s a modest explanation of a patient, crafty chip to her left in tight quarters that left the defender frozen and stumbling for a brief second just before St. Amand blasted a shot to the far post that was a no-doubter as soon as she hit it.

St. Amand delivered that back-breaker with that goal with just under 12 minutes to play in the first half of what became a 3-0 victory over Mountain View. The win clinched the Region 5D championship and a spot in the state final four for the defending Class 5 state champion Patriots.

St. Amand is a known entity, and teams are usually sure to mark the junior forward. That’s helped open things up in a significant way this year for freshmen Natalie Wolfe and Devon Higginbottom. She proved exactly why teams try and lock her up Thursday, with a little help from some friends including Reilly Bonham, who’s through ball setup St. Amand’s goal.

“I’m just really lucky to have a teammate like Reilly who just consistently plays really well placed through balls so I was able to get on the end of it,” St. Amand said.

St. Amand had already done her own bit of setting up nine minutes into the game when she hit an arcing corner into the box that found senior Kora Jillions’ head. Jillions headed it back toward the goal and it dropped in for a 1-0 lead.

“Everyone was all over the place and Maddie was able to do a beautiful cross, straight to my head that was perfectly placed,” Jillions said. “I’m just really happy I was able to get it to goal.”

Mountain View meanwhile, was attempting to drop the ball in over Albemarle’s defense that was playing up most of the game, content to try and create a quick counter while leaving enough back to attempt to curtail the Patriots’ array of weapons up top. But each time Mountain View tried that tactic, some combination of Ashley Snider, Liz Yow or Emma McMullan just locked Mountain View up. Jaya Daniel and Sydney Alexander shared the keeper duties and only Alexander was seriously threatened at any point and she came out and snuffed out that seemingly singular chance with a sliding save early in the second half.

The Patriots’ insurance goal came early in the second half when junior Katie Manley took it down the rightside herself and stung the near corner for a goal. Just days after the Patriots’ freshmen, Higginbottom and Wolfe, handled the scoring load in the region semis, the upper classmen did the heavy lifting against the Wildcats.

“We’re so fortunate with what we have, we’re so deep and we’re able to put the ball on anyone’s foot and see where it lands,” said Albemarle coach Amy Sherrill.

The Patriots will face Briar Woods next week in the Class 5 state semifinals, with a chance to properly defend their state title from 2019. That’s a welcome development in a year that has been challenging for every student athlete.

Now they’ll get a chance to push it a step further. 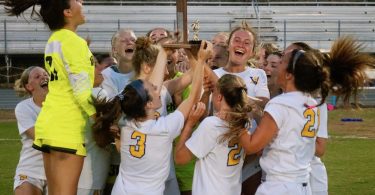