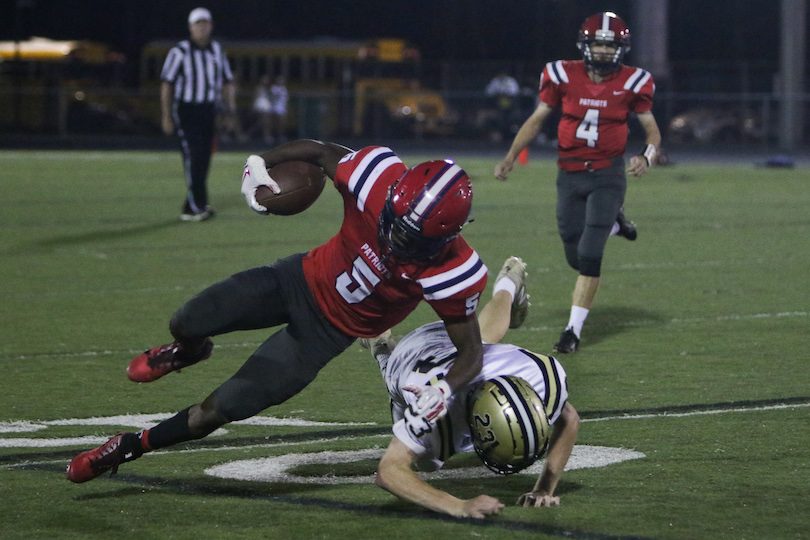 With the much-anticipated return of a pair of injured seniors and playing in front of its home crowd for the first time in three weeks, Friday’s tilt with rival Monticello was just what the doctor ordered for a reeling Albemarle football team.

After having to watch their young teammates open the season with five consecutive losses, seniors Makhi Washington and Jake Rombach suited up for the first time, which set the stage for a potential season-turning performance for the Patriots.

In a complete reversal of fortune of the first five weeks of the year, just about everything went AHS’ way on Friday night.

After surrendering the opening kickoff for a touchdown, the more healthy edition of the Patriots got rolling on both sides of the ball en route to a 45-16 victory over the Mustangs.

Washington’s return helped spark an Albemarle offense that was averaging less than a touchdown per game through the first five outings this fall. The powerful senior grinded out a four-yard run on his first carry of the year, but his night was just getting started. Just over a minute later, he was dancing in the end zone following a 15-yard run to pay dirt for Albemarle’s first touchdown of the night.

Washington was the go-to-guy on short-yardage situations, and helped the Patriots convert eight of 11 third down attempts on the night. The veteran back bulldozed his way to 111 yards on just 11 carries, while adding a completely new dimension to Albemarle’s offense.

“It feels amazing to be back playing with my teammates,” Washington said. “We knew it was going to be an exciting game… Our guys came and played, they played their tails off, and we all did really well. We played our assignments and just executed.”

Rombach made a sizable impact in his return as well. After surrendering 50 points to Orange County last week, Rombach led an inspired effort on defense. Behind Rombach’s play up-front, the Patriots forced three turnovers, and did not allow an offensive touchdown until the fourth quarter.

“On any football team, you have leaders, you have guys who are the most experienced players. [Washington] and [Rombach] are the most experienced players on our team. They were probably the most productive players on our team as juniors, so you never really go into a year thinking that you’re not going to have them for half the season,” said Albemarle coach Brandon Isaiah. “It was about two young men that really fought for what they wanted and to just get back to their team. I just felt a different energy all week, and for us, it was good to watch it all play out and come to fruition tonight.”

Rombach and Robinson-Washington’s returns were the biggest story of the night, but the new-look Albemarle offense helped turn what was a close game into a blowout.

After struggling to run the ball for the first half of the season, Isaiah threw in a number of wrinkles to attempt to get the ground game going. Albemarle scored touchdowns off of jetsweeps, direct snaps, and everything in between. The call of the night came towards the end of the first half following a big-time interception by Aquon Sims.

The Patriots had marched down to the two yard-line, but two costly penalties pushed the home team into a third-and-goal from the 18-yardline. But with everyone on the Monticello sideline screaming ‘pass’, Ebenezer McCarthy took a counter to a wide-open left side of the field, and the sophomore followed some key blocks to an 18-yard touchdown run.McCarthy’s run lifted the Patriots to a 21-10 halftime advantage, but that was just the beginning.

Leading 24-10 late in the third quarter, Nolan Pitsenberger took a jet-sweep 48 yards for a touchdown on his first carry of the season. From there on out, there was a lot of wildcast, as Sims and Robert Jones scored on direct snaps from 35 and 10 yards out respectively.

“We’re just really just trying to focus on getting the ball in the hands of the guys that can make plays for us,” Isaiah said. “We got some really talented kids that don’t have a lot of experience, even our seniors, so for us, it was just important for us to make the plays that we know that they’re capable of making.”

McCarthy rushed for a season-high 115 yards off of 18 carries. Sims turned in 59 yards on just four carries. Quarterback Jake King went 7-12 through the air, while throwing for 170 yards and a touchdown to Torry Green. Six different Patriots scored in just about every way possible.

One week after yielding 50 points to Orange, the Albemarle defense responded to the play of their counterparts by not allowing an offensive touchdown through the first three quarters. After watching Malachi Fields return the opening kickoff 94 yards for a touchdown, Albemarle did not allow the talented signal-caller to get into a rhythm.

Fields managed 87 yards rushing, and his only offensive touchdown came when his team was trailing 38-10 in the fourth quarter. Monticello led 10-7 following a 30-yard field goal by Jack Culbreath, before the Patriots took the lead on their ensuing offensive drive.

The Mustangs had the ball near midfield just before halftime, before Sims stepped in front of a Fields’ pass to end the threat. After that, Fields and company did not threaten again until it was too late.

“I don’t think you could really bottle [Fields] up — that’s a Division I athlete,” Isaiah said. “That kids’ a special football player. He throws, he runs, he returns kicks, he never comes off the field, and I’ve never watched him on film not play hard. We knew we were going to have our hands full with that kid, so we just made sure that we had everyone be where we needed to be running to the football.”

Monticello (1-5) will look to climb above .500 in the Jefferson District next Friday at home against Louisa, while Albemarle will enjoy its first Friday night off since the middle of August.

When the Patriots return to the field in two weeks against Fluvanna, it will have come following two spirited week of practices.

“[Friday’s win] is a rejuvenation. The energy in practice is different,” Washington said. “We’re all excited to come to practice and just get better. We’re just going to keep working hard.”

Albemarle football’s Ebenezer McCarthy talks about the Patriots’ first win of the season, a 45-16 win over Monticello in First Off the Field presented by @physical_therapy_acac