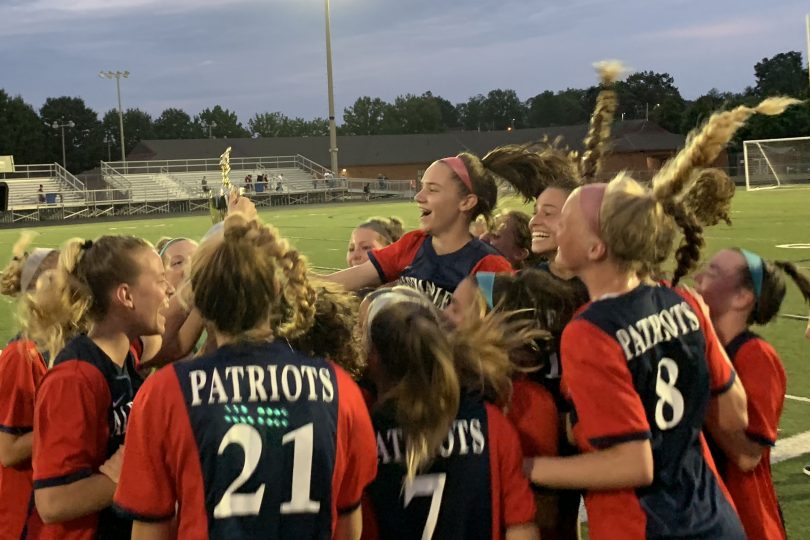 Sometimes a team just has your number. The Albemarle and Mountain View girls soccer teams can’t stop running into each other in the playoffs, and as has been the case since 2016, the Wildcats just can’t stop the Patriots. With a 3-0 win over Mountain View that was decidedly one-sided from the start, Albemarle secured not only its third straight Region 5D championship, but also a home game when the Class 5A state tournament begins next week.

“It was a little surprising because we knew they were a very good team with a lot of experience with fantastic talent and so we scheduled them early in the year (for a scrimmage) knowing that there was a good chance to see them again,” said Albemarle coach Amy Sherill. “Thankfully that all paid off.”

Albemarle knocked on the door for quite a while before senior Maggie McMullan broke through. McMullan, had a shot saved in the eighth minute from 20 yards out and then another sail high on her just five minutes later. The Patriots also had chances with Madeline St. Amand attacking the goal and setting up a cross that just slipped through untouched in the 13th minute and Savannah Alexander’s shot being saved from 35 yards five minutes late out and a booming shot again from St. Amand two minutes later just missing the net.

With 13:53 left until the break, McMullan collected a rebound off a shot from St. Amand and she buried into a wide open goal and from that point on, the Patriots had it in the bag.

“Once we got that first one the flood gates opened up for us,” McMullan said. “We were able to just play. It upped the ante.”

Mountain View was able to threaten three times in the first half, all on plays from senior Captain Megan Watts. She had a cross that just missed in the 20th minute and a sure goal fly high on her from 10 yards out just six minutes later. Then with 7 minutes until the break, Watts booted a shot that again went high. That would be as close as Mountain View could come to making it a game again.

“We’ve seen Megan three years in a row now and she’s so good and going to go on and do excellent things at Old Dominion,” Sherrill said. “I mean she’s just really, really good and so we knew who we had to stop. We’re lucky to have an experienced defense that knows how to do that.”

The Patriots came out of the half continuing to apply plenty of pressure. Just under eight minutes into the second half, Alexander cleaned up on on a sloppy play defensively off a corner from St. Amand to make it 2-0. And with St. Amand and Kora Jillions as freshman and sophomores controlling the game, the Patriots being young attack wise turned out to be a plus.

“Between Madeline’s speed and Kora’s footwork, it’s all very lethal,” Sherill said. “We might be young there but it paid off tonight.”

With the time of possession one sided and the Albemarle defense keeping the ball far away from its own goal the rest of the way, the Patriots put the final nail in the coffin with 6:04 left on the clock when McMullan scored again when a Mountain View header to try and clear things out landed right in her wheelhouse and she rifled the shot out of mid-air to make it 3-0.

“This feels fantabulous,” McMullan said. “We all got out there and all gave it 110 percent on and off the bench. Just seeing all the hard work we put in during the season, preseason, everything show up on the field tonight? It just feels great.”

With the win, the Patriots have beaten the Wildcats three straight years in the playoffs, including last year in the state quarters and of course in 2017 for the program’s first state title.

Albemarle will face either Briar Woods or Stone Bridge in the state quarterfinals on Monday at 7 p.m. This is the fourth straight state tournament appearance for the Patriots.