With first place in the Jefferson District volleyball race on the line Tuesday night, Monticello and Albemarle came into Tuesday night’s match on short rest, having played the night before. Then the Mustangs took the first set by two points, just the second set in the last 44 that the Patriots have lost in Jefferson District play.

“I have to hand it to Monticello,” said Albemarle coach Lance Rogers. “They came out strong and they came out after us.”

But after that, Albemarle woke up. The Patriots reeled off three straight wins by double digits and beat the Mustangs 3-1 to stay unbeaten on the year at 8-0 and prolong the Patriots’ 49-game win streak in the Jefferson District.

Maya Winterhoff unleashed 29 kills (as well as 15 digs) for the Patriots while Keira Roach dished out a season-high 45 assists as the Albemarle offense shifted into another gear in the final three games.

“My sets were amazing and I kind of knew what spots were going to be open after watching them play yesterday,” said Winterhoff after the win.

The game plan was simple for the Patriots coming out in the second set: get the ball to No. 11. Winterhoff was dominant, recording nine of her 29 kills in the second set, including five kills right at the beginning of the set to help Albemarle to a commanding 10-1 lead.

Winterhoff added back-to-back aces and the Patriots cruised to a 25-14 win in the second set to even the match at 1-1.

In the beginning of the third set, Monticello kept things close behind more stellar play from Burnsed and Wilson. But, a backbreaking 13-4 run by the Patriots late in the set gave Albemarle a 2-1 advantage in the match.

Winterhoff added several more kills in the third set and Sophia Dawson added three kills and an ace to help the Patriots take the third set.

“If you figure out Maya, then you’ve got to figure out Sophia later,” said Rogers. “So it’s pick your poison as they say. She had a sore shoulder so we were a little worried about that but she came through for us today.”

Albemarle started the fourth set strong once again, quickly building a 12-4 lead after four more kills from Winterhoff early in the set. That lead would hold for the Patriots, who took the fourth set 25-12, and the match, three sets to one.

Franceszca Camaya notched 16 digs on the night. Dawson also had a strong night for the Patriots at the service line with 23 service points.

Up next, Albemarle will host Charlottesville on Wednesday night while the Mustangs will host Louisa Thursday night. 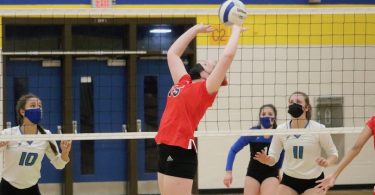