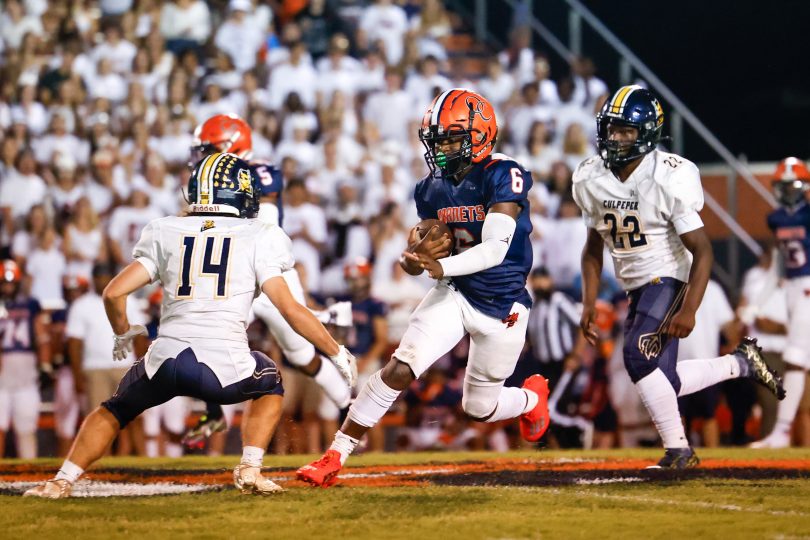 It’s hard not to like the array of options that make up Orange County’s offense.

There’s the multi-tooled Christian Simpson with the size and height of a big wideout who runs like a running back. A tall wideout in JaePharoah Carpenter who can go up and get a jump ball. And two true running backs, Bryant Chiles and Dwayne “Bubba” Wells who pack a serious punch.

“We’ve got weapons at every position — if they stop one thing, then we’ve got a whole bunch of other stuff to go to,” Wells said.

All those weapons — with quarterback Jeremiah Wharton piloting the offense — got in the mix Friday night behind a dominant offensive line performance to blow out Culpeper 54-27 and boost the Hornets to a 2-0 record.

“We’ve got a good, young nucleus here that can be here for a couple of years,” said Orange coach Jesse Lohr. “Jeremiah is doing a great job of getting the ball in people’s hands and we’ve got three running backs that run the ball hard.”

Wells scored four times, with three of his six rushes for 166 yards — that’s 26.6 yards per carry — going for touchdowns. He also threw in an interception that essentially broke the game open early in the second quarter and put Orange up 21-0.

“I read the run read first and then he dropped back and threw it low,” Wells said. “I just put my hand up and tipped it and then I had to go get it and take it all the way back.”

A few minutes later, Wharton hit Simpson on a 66-yard touchdown and after Culpeper got on the board finally, Wharton found Carpenter on a fade with 15 seconds left in the first half for a 34-7 lead at the break. Simpson rushed for 108 yards on just 12 touches and added a touchdown on the ground to that electrifying second quarter catch and run for a big night.

Bryant Chiles picked up 52 yards on seven carries to round out an offensive performance that piled up 339 yards on the ground and nearly 500 yards of total offense.

“(The offensive line) was blocking perfectly and I just had to follow it through,” Wells said

A big part of that is the offensive line for the Hornets where senior Chase Rollins checks in at 6-foot-5, 265 pounds and fellow senior captain Trey Clatterbuck adds another experienced big body at 6-foot-1, 260 pounds. The Hornets have gone out of their way to make that unit flexible, giving Orange a different dimension up front.

“Chase and Trey, our senior captains, are a good tandem, we sometimes put them together, sometimes we split them — I flip flop my offensive line around,” Lohr said. “For them to be able to handle that responsibility and the others, Myron Malson, Andy Lee and Trent Ratliff to be able to move around, play a lot of different positions, it allows us to stay multiple and we can do a lot of different things.”

It showed as the group opened up big holes all night, giving Wells, Chiles and Simpson a chance to get into the second level relatively untouched.

“We didn’t underestimate this team, we came in early and smacked them in the mouth, made sure we stayed together up front and kept our blocks,” Rollins said.

Meanwhile, the Hornets’ defense held Culpeper to just 57 yards on the ground on an average of 2.1 yards per touch. Chiles was an absolute menace throughout, knifing through the line while piling up 11.5 tackles including two for a loss. Wells had 3.5 tackles for a loss himself to go with the pick six. Senior linebacker Kaleb Faust and Aliyas Carter, a 350-pound sophomore space eater, each made two stops in the backfield. Carpenter had five solo stops. Naziere Mcintosh also hauled in an interception.

The Hornets surrendered 199 yards through the air, the bulk of that came with the game already in hand. Bennett Sutherland finished 17-for-30 with 199 yards and two touchdowns at quarterback for the Blue Devils.

Orange (2-0) jumps into Jefferson District play next week with a home game against Charlottesville.

On a perfect fall afternoon in St. George, Blue Ridge enjoyed success in all three phases of the...

Louisa County took to the air Friday night and it paid off in a big way.   The Lions rolled 63...