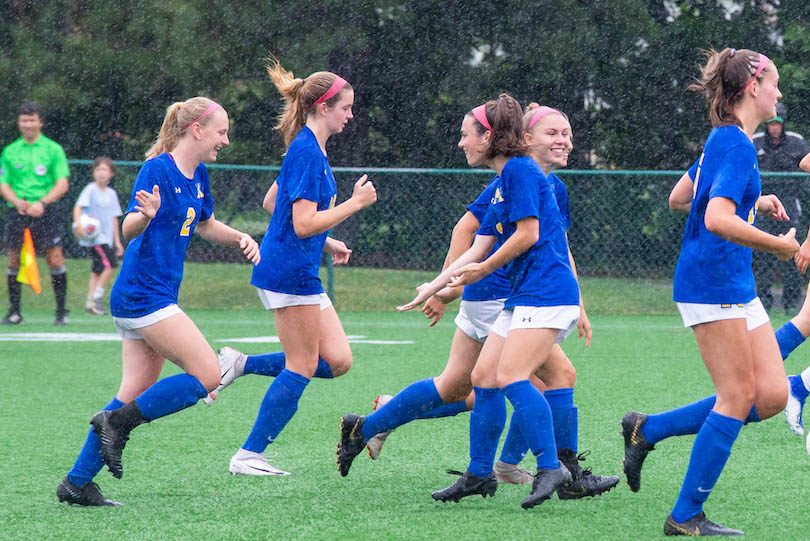 It’s really tough to defend, but you need an athlete like Kate de Jong to pull it off. Western Albemarle is good to go there.

“Our team has a big emphasis on the outside backs running forward and making sure we’re getting involved in the play because typically you wouldn’t expect a defender to come up and cross the ball,” de Jong said.

The Warriors’ senior defender pressed up with about 17 minutes left in the first half and took a chip from Erin Meier near the sideline and uncorked the ball. She’d seen Kelly Rogers streaking down the left flank essentially wide open and she lofted the ball right to Rogers.

“I knew she was going to try and cross it and she played it right to me so I was able to knock it in,” Rogers said.

Rogers finished and Western Albemarle got a huge spark in a 3-0 victory over William Monroe in the Class 3 state semifinals, overcoming the absence of one of their top players, Julia Berg, who was out of the lineup due to a stomach bug.

The Warriors handled Berg’s absence well, with Meier taking her game up a notch in the midfield while Berg’s substitutes’ Brooke Whitier and Kayleigh Long played admirably. With capable freshmen and sophomores like Long and Whittier respectively, Western was well equipped to handle Berg’s absence.

“Obviously we were upset that we weren’t playing with Julia because she’s such an amazing player,” de Jong said. “We have a really nice team with a deep bench, we have players who can fill in.”

The win puts the Warriors a win away from a third-straight state title while ending the Dragons’ incredible run to the state semifinals. Monroe earned the program’s first state tournament berth and then went on the road and shocked Tabb in PKs to advance to the state final four. They put up a solid fight against the Warriors, but trying to dethrone to two-time defending champs was a tall task.

“It’s a thing of beauty — every scouting report we got we knew they were good in the air, great with their head,” said Monroe coach Jeremy Lamm. “When you’re giving them that much space to operate, they’re getting the ball to their head and flicking on (it’s tough to contain).”

Western’s well-organized defense hemmed in Monroe star Sydney Dombrovskis, limiting the tall forward to just one particularly good run in the second half. Meanwhile, Monroe keeper Alex Sharff stood up against a barrage of chances for the Warriors, making several big-time saves in the defeat.

Despite the loss, Monroe’s breakthrough season was pretty incredible.

“I don’t think anybody thought we’d make a run to states this year, so to get this far, make the tournament and win a game, especially the circumstances that we did was just crazy,” Lamm said. “I’m extremely proud of them. The six seniors have left a lasting legacy of leadership that all the girls can aspire to.”

Western took control of the game with the Rogers goal, but couldn’t add another until Katrine Berg broke through with a blast from the right that ricocheted off a Monroe defender’s foot and into the net. That score came with just under 12 minutes to play in the game. Then Meier let loose a brilliant shot from just outside the box to make it 3-0 in the closing two minutes.

While the game was 1-0 throughout, Western controlled the bulk of possession and just kept creating chance after chance. To still pull that off without Berg in the lineup is a good sign of things to come in the Class 3 final Saturday at Roanoke College where they’ll face Brentsville, who knocked off Monticello 3-1 in the other semifinal.

“It’s so exciting, it’s nice to represent Western going into states and try and get that title for our school,” Rogers said.

Western Albemarle girls soccer’s Kelly Rogers talks about the Warriors advancing to the Class 3 state title match in First Off the Field presented by @PT_acac pic.twitter.com/BTTaQsOTz5