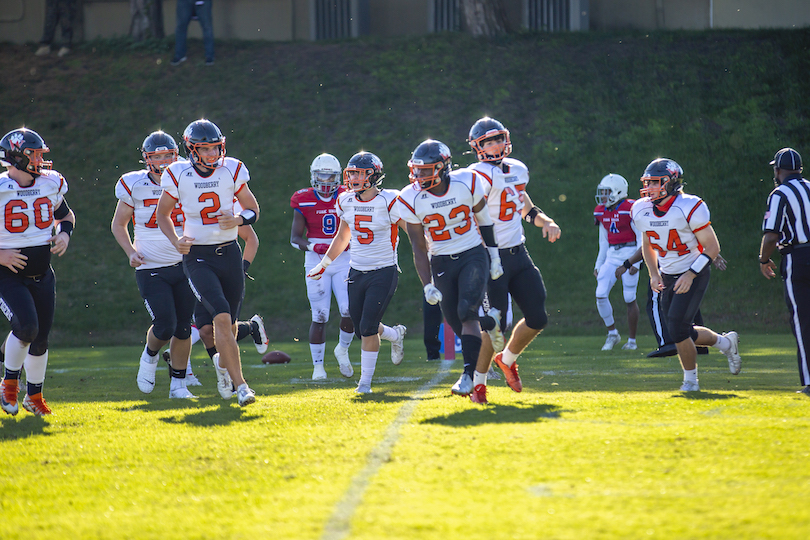 It’s a football season like none other, and so when private school squads make it all the way through game prep and testing protocols to the field this fall, players aren’t throwing away their shot.

“We told the guys, ‘you’ve got to cram one season’s worth of highlights maybe into one game,’ and I’m just so happy for so many guys that did well today, and a lot guys that got to play,” said Woodberry Forest coach Scott Braswell, whose squad raced out to a 41-0 lead and cruised to a 47-21 victory over Fork Union.

On a warm and sunny Friday afternoon in Fork Union, Woodberry’s Donovan Baker appeared to be in late-season form. His first four carries of the game, which were also his first of the season, went for 141 yards and two touchdowns.

“We were excited to come out and face a different-colored jersey,” said Baker, who finished with 18 touches for 277 yards and four scores on the day. “I was gassed after that [start], but it was nice to just run the rock again.”

The Tigers received the opening kickoff and promptly covered 73 yards in three plays. Senior quarterback Ben Locklear found senior wideout Clark Warren for 42 yards on the first play from scrimmage; from there, Jackson covered the rest and scored on a 20-yard dash. After FUMA’s opening drive ended on downs, Jackson took the next snap and raced 68 yards to make it 13-0.

“We knew they played a 3-3 stack a lot, so we practiced that for the last two weeks or so,” Baker said. “I knew where the holes were, the o-line blocked great, and my fullback Walker SImmons blocked well, so that made my life easier.”

The junior running back added a third score to cap a nine-play, 96-yard drive just before the end of the first quarter. He wrapped up his afternoon with a 47-yard dash midway through the third that put the Tigers up 34-0.

“Donovan’s a guy who just worked so hard in the offseason,” said Braswell. “Somehow he had access to a weight room and training facility [in the summer], and he would send videos of him working with all kinds of weights. I thought he was really going to have a breakout year if we could just have a season, so I was so happy for him to get a payday. He kind of typifies the whole team: they worked hard, and this was their one chance, and it was good for them to have a good day.”

“Over the summer, I went to padded camps and I think I finally learned how to hit this year, and I was able to show,” said Hampton. “These games really gave me a chance to get some film to send out to coaches, and maybe get some more looks and offers.”

On the other side of the ball, Hampton and the FUMA ground game were stymied for most of the afternoon by Woodberry’s big defensive front. The Blue Devils had accumulated just 38 rushing yards before Jackson finally broke free for a 33-yard touchdown late in the fourth quarter.

“[Hampton]’s a great all-around player and I think should be recruited anywhere,” said Fork Union coach Mark Shuman. “I told him I had to get him one at the end and luckily I did. Last couple weeks, we couldn’t make holes for him, but I’m glad he got his score to go out on a good path.”

FUMA quarterback Kieran Meyer took on a gunslinger’s approach as the offense mounted four first-half drives deep into Woodberry territory, but all ended on downs. The junior finished the day completing 20 of 40 passes, connecting with nine different receivers for 269 yards and one touchdown, a 9-yard fourth-quarter strike to senior Alex Williams.

“As the field got shortened, it was easier for us to pass defend, so we kind of locked up and did a good job down there [in the red zone],” said Braswell. “We have some very big linemen, and they did a good job. Particularly with our four-man front, it was really a challenge to run the ball against those guys.”

Indeed, Tiger sophomore Joel Brutus, a 6’2” 300-pound defensive lineman, added to his highlight reel with a couple of fierce tackles of Blue Devil running backs in the second half, as well as a big fourth-quarter sack of Meyer.

For Woodberry, Locklear only went to the air 14 times, completing 8 for 188 yards. He first struck paydirt with a 1-yard keeper late in the second quarter that put the TIgers up 27-0 at the break. He tallied another touchdown with an 11-yard pass that junior receiver Xavier Gaillardetz bobbled as he fell into the endzone before securing the reception on his back. That pushed the margin to 41-0 late in the third quarter, but junior Dominique Julius got the Blue Devils on the board with an 82-yard return of the ensuing kickoff. Julius fielded the kick near the sideline to his right before working his way across the field and then outracing the pursuit down the left sideline.

After spelling Baker on the Tigers’ next drive, Tank Yaghoubi tallied the game’s other touchdown on a 1-yard run early in the fourth.

Woodberry (1-0) moves ahead with no game currently scheduled for next weekend, although Braswell mentioned postgame that a few options are still being explored. If a qualified opponent cannot be arranged, then the Tigers will likely next take the field in the spring 2021 season, which could include the Tigers’ traditional rivalry showdown with Episcopal.

FUMA (1-5) has completed its fall schedule. The Blue Devils are also slated to return to action in the spring. 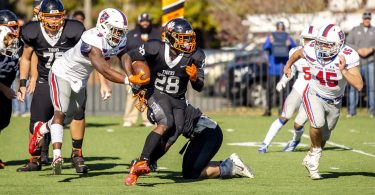 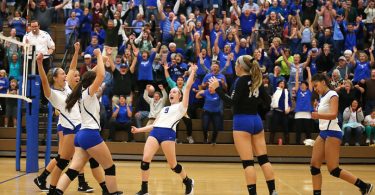