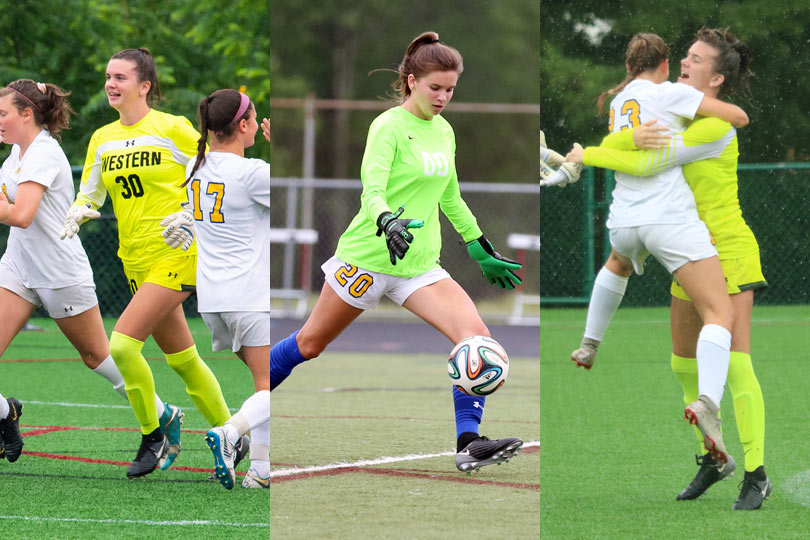 It didn’t take keeper Bailey Wood long to make an impression on Western Albemarle girls soccer’s assistant coach Taylor Holder. During an early training session, Wood leapt, flew through the air and pulled the ball out of the upper 90.

“I looked at coach (Jake) Desch and was like ‘Alright I can work with this’,” Holder said.

Holder, a former collegiate keeper herself, knew what she was looking for in the Warriors’ returning starter and saw it immediately in Wood. At that point Wood already had one state title as the Warriors’ starter under her belt. It turned out she was just getting started.

Wood went on to win two more state titles, combining with fellow seniors Molly Gobble and Erin Meier to form one of the most productive classes in any sport at any school in recent memory. Three opportunities, three titles.

“We’ve been playing together since we were 10 years old,” Wood said. “That was pretty special to have them all with me on the team as freshmen, kind of grow with them, and share the same experiences through high school.”

The COVID-19 pandemic cancellations prevented Wood, Gobble and Meier from trying to make it four in a row. With a lot of talent back in the fold but several key components to replace, Western would have had their work cut out for them with the top challengers perhaps coming from within the Jefferson District with Monticello and Charlottesville battling it out with the Warriors.

But while Wood, who’s bound for the College of Charleston’s Division I women’s soccer program this fall, didn’t get a chance to go for the four-peat, she’s left an impressive, historic mark at Western. In her last two seasons, the Warriors surrendered just 11 goals, less than one per game, an average of just 0.3 goals per match. Wood earned second team All-State honors as a sophomore during a 19-1 run where Western gave up just three goals all year. 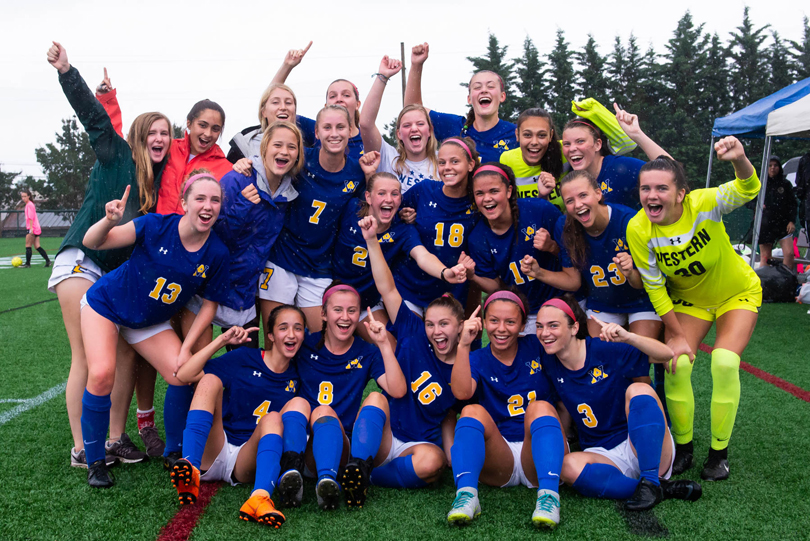 It’s a testament to the Warriors’ defense as well, and Wood has had some incredible defenders in front of her like all-state defenders Shannon Moore (2018) and Kate de Jong (2019). Moore, who played center back in front of Wood, was an excellent leader and she was a big reason that Wood was able to find a comfort zone early on in what can be an intimidating situation and program to come into as a ninth grader.

“She was much older than me when I came onto the team as a freshman,” Wood said. “She was really welcoming. I remember (the three freshmen) were super nervous and super scared. We’re like, ‘Oh my gosh, all these people are so good.’ We’d grown up playing with them at SOCA and watching them play. So to have (Moore) take me under her wing and be really welcoming was pretty cool.”

Wood got pretty comfortable quickly, handling the pressures of the 2017 state title run and then the 2018 run. The Warriors are in the unique position of regularly measuring themselves against another year-in and year-out state title contender in Albemarle High twice a season. The Patriots and Warriors’ regular season matchups often have a playoff feel, and during the 2018 season, Western took a leap forward as a program and Albemarle, who was also defending a state title that year, served as a measuring stick. The Warriors beat Albemarle 2-0, the first team to beat Albemarle since its entry into the Jefferson District while handing the Patriots their first regular season loss in more than five seasons.

“We did not do well against them my freshman year,” Wood said. “Coming back our sophomore year, we’re kind of out for blood. So being able to beat them, especially at home was pretty special, that was something that our team had set as a goal that we worked towards for a pretty long time.”

Wood weathered a storm in that matchup as Albemarle cranked up the intensity in a huge way after falling in the two-goal hole. Western swept the Patriots with a victory in the second meeting, proving that in some ways, it’s harder for the Warriors to win a district title than a state championship.

Wood is the latest in a line of local keepers to play at the Division I level on the girls side, including Albemarle’s Aiyannah Tyler-Cooper and Fluvanna’s Morgan Symmers. Symmers wrapped up at George Mason this fall while Tyler-Cooper earned All-Southern Conference honors at UNC-Greensboro as a sophomore. Like Tyler-Cooper during her career, Wood often can go an entire game without touching the ball much because of the Warriors’ dominance defensively.

“We’ve been lucky to have some great teams since I joined the program and even before that,” Holder said. “Bailey wasn’t often tested, but when she was we could always trust her and had immense confidence in her abilities. “There’s so much joy when she plays the game.”

That includes her hands. Like she showed Holder on the early leap into the upper 90, Wood is an excellent shot stopper with top notch hands, consistently holding the ball well. But relying on just that on a team that doesn’t give up many chances would make for a pretty dull season and Wood has to stay engaged so she is ready in big moments. That led to her steadily improving her communication with her defenders, which serves the dual purposes of keeping the Warriors’ shape and keeping Wood locked in.

“The thing that keeps me most engaged is keeping my defense organized,” Wood said. “Usually that’s the thing that I focus on most. If anything, I’m just talking to myself, but it makes me feel like I’m doing something important by telling them what to do.”

Holder, who was a collegiate keeper at the College of Charleston too, has been a help as a mentor too, preparing Wood for the change in speed she’ll face at the next level competing in the Colonial Athletic Association.

If her high school career is any indication, Wood will find a way to impress right away and get comfortable quickly. That formula clearly worked for the Warriors — it might be a catalyst for the Cougars too.

Albemarle High is celebrating its spring college commitments via YouTube today. Here’s a...